The M Calculus: The Power and Reach of the Muslim Vote

There are 180 million Muslims in India. Though the Election Commission does not give electoral roll estimates on religion, one can fairly estimate that in 218 Lok Sabha constituencies across India, Muslims have more than 10 per cent vote share. With parties actively wooing the Muslim vote, what impact will it have on General Elections 2014? 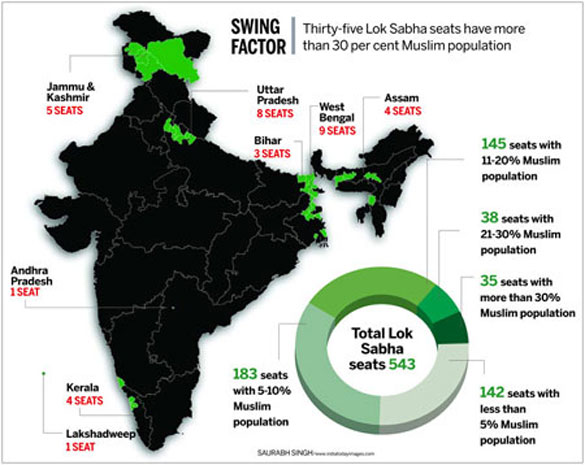 •        Muslims, by and large, have voted for non-BJP parties, or anti-BJP parties in states where BJP has been an important player for long. In states like UP, where there has been more than one 'secular' option, Muslims have adopted 'tactical voting', where they vote for the best possible candidate who can defeat BJP. The sentiment against Gujarat Chief Minister Narendra Modi among Muslims is even stronger than the mood against BJP. So much so that even L.K. Advani is being portrayed as a secularist, though it was he who pushed BJP down the Ayodhya route.

•        The minorities regard BJP as an anti-Muslim party. There is a decisive Muslim vote of more than 20 per cent in 70-odd seats where there will be a counter-polarisation of Hindu votes. This will help BJP in any election divided on communal lines.

•        In 150-odd seats across India, Muslims form more than 10 per cent of the vote share. It is enough to become a deciding factor in who they will vote for but not enough to trigger a counter-polarisation towards BJP among Hindu voters. 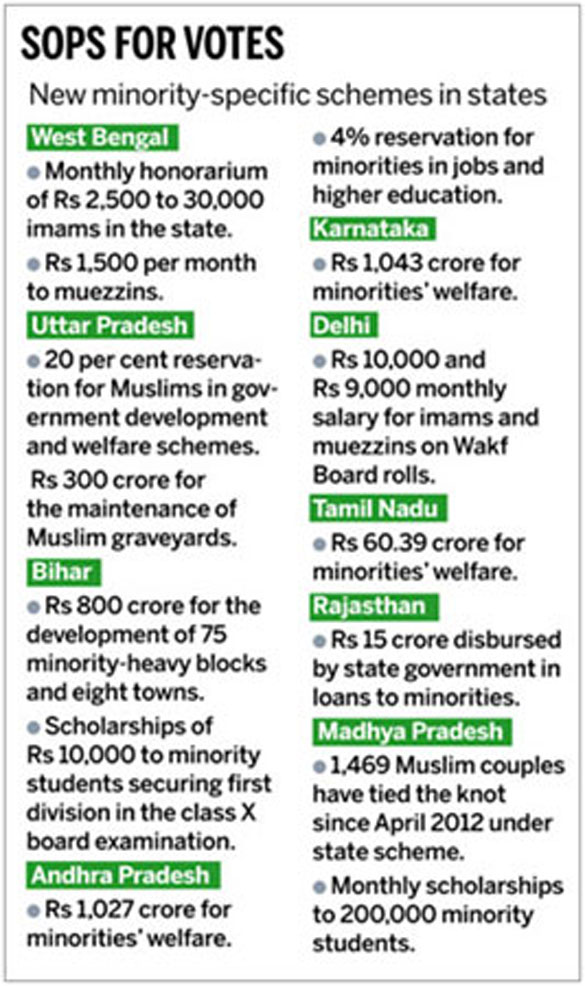 •        These are some seats where non-BJP parties would like to display their 'secular' credentials to get the critical Muslim vote. These are seats in which the margin of victory is less than 10 per cent. Oddly, these seats are packed in states where BJP is a nonentity. For example in Kerala, West Bengal, Andhra Pradesh, Tamil Nadu, Odisha and Assam, it is the regional parties that are in direct competition with the Congress. But in order to defeat the Congress, they do need the critical mass of Muslim votes. That's why a majority of regional parties from these states would prefer to oppose Modi and BJP. It puts them on par with Congress.

•        However, this does not work in similar fashion in states like Maharashtra, UP, Bihar or Gujarat, where BJP is a stakeholder and is looking to gain further. These states have a large number of seats with a sizeable Muslim presence. These are the states where a clear pro-Muslim stand taken by Congress, SP, BSP, RJD or even JD(U) polarises Muslims in their favour. There is also a counter-polarisation among Hindu voters for BJP.

•        The general perception is that wherever any party forms a relationship with BJP, it loses the Muslim vote. This is true to a large but not complete extent. Nitish Kumar and Mayawati have shown clearly that they can get Muslim votes even after hobnobbing with BJP. Narendra Modi's entry into the picture muddies things though.

•        Muslim organisations are preparing an extensive advisory to guide Muslim voters across all 543 constituencies. It is doubtful how this will work out in a post-poll scenario as barring the Left Front, almost all major regional parties have associated with BJP at one point of time or another.

•        The Muslim community's vote can decide MPs in approximately 220 Lok Sabha seats. These seats should not be confused with those where Muslim candidates win. There are only 30 Muslim MPs, roughly 6 per cent of the total number of MPs. This clearly is much less than their 14 per cent share of India's 1.2 billion population.

•        It will eventually boil down to the critical state of Uttar Pradesh. The Muslim vote has dictated the last two elections in the state. In the 2007 Assembly polls, Muslims chose BSP and in 2012 they rallied behind SP, thus helping the state get single party rule. But in the 2009 Lok Sabha elections, they voted tactically to help the best possible candidates from SP, BSP and Congress win against BJP. On the face of it, the 2009 results from UP look like a fractured mandate; but if one looks closely, the only loser in the state was BJP whose share went down to a historic low of 10 seats, polling about 18 per cent votes, while the Congress went up from 9 to 21 seats polling almost the same number of votes. In other words, Uttar Pradesh had given 70 out of 80 Lok Sabha seats to non-BJP parties; and Muslim voters were instrumental in this verdict.

•        Out of the 80 Lok Sabha constituencies in Uttar Pradesh, Muslims are over 20 per cent in two dozen-odd seats in the western region including Bareilly, Badaun, Pilibhit, Rampur, Sambhal, Amroha, Meerut, Muzaffarnagar, Saharanpur, Bijnor, Amroha and Moradabad. Little surprise then that the recent communal riots have polarised sentiment in these very areas. In eastern UP, they are decisive in another 12 seats including Azamgarh, Bahraich, Gonda, Sravasti, Varanasi, Domariyaganj, Gonda and Balrampur. If Modi decides to contest from one of these seats, especially Varanasi, the effect of polarisation will be felt not just in western UP but also in western Bihar/ Bhojpur region.