I am Wajahat Farooq Bhat, Once a Stone-Pelter, I Now Work for a Better Future for Kashmir’s Youth

·         People who live in complex territories like Kashmir evolve with each new reality that emerges day after day.

·         I am a survivor of a period when the majority of young people are susceptible to ideas that promote militancy and secessionism.

·         The only ideas that could strike me those days were terror, violence and Azadi. The driver of our imagination happened to be Osama Bin Laden and the Taliban.

·         In the first few months of 2020, our focus shifted to de-radicalisation and we spread our wings to South Kashmir, particularly Pulwama. 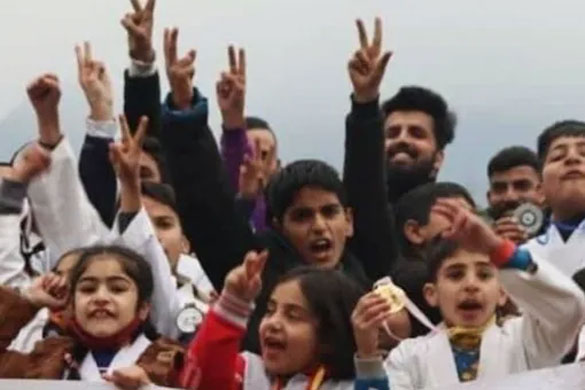 People living in complex territories like Kashmir change with every reality, unfolding day in and day out. I can say those who survive the political ambiguity come to learn about the reality. Political ambiguity, I believe, is the period of stress we occasionally experience in Kashmir; it renders thousands dead, and only a handful of people could live to disclose the reality.

It is the time when the majority of young people become prey to ideas that potentially advocate militancy and secessionism. I am a survivor of such a stressful period. I am Wajahat Farooq Bhat, born in a middle-class family in Sheen, Baramulla an area not immune to the infection caused by violence.

I graduated from Degree College in Baramulla. Our parents live in a distorted reality; they believe that sending their children outside Jammu and Kashmir may put their lives in trouble; this is a cardinal lie, factually incorrect. As per data, hundreds and thousands of young people choose colleges outside their home state to grab opportunities; they make it to national and international institutions to work in distinguished capacities. But here, most of my classmates joined the local Government Degree College and I followed them, and completed my three-year BA course, with political science as the main discipline. Then, I chose to pursue Masters in Political 0cience.

In Baramulla, like in other places in the Valley, Fridays are days to contest the claim of India on Kashmir and ardently raise slogans in favour of Pakistan, considered a sympathiser of Kashmir. A section of disgruntled Kashmiri youth thinks Pakistan may help them force the Indian Army to vacate the land. Therefore, Fridays witness stone-throwing and anti-India drama, a display of vengeance.

I had been part of this cohort for a long time. The only ideas that could strike me those days were terror, violence and Azadi. The driver of our imagination happened to be Osama Bin Laden and the Taliban. In our area, all those involved in violent, business-like stone hurling, maintaining proximity with militants and confronting state forces on road would get public attention. Occasionally, the acts of violence would help us feel heroic — no matter who gets hurt or dies on the spot.

In 2014, elections were around the corner and political parties were rallying for votes. In the middle of the election season, I along with other co-believers confronted the police vehicles transporting policemen for deployment, for law and order in the town. I threw multiple rounds of stone at them that could have broken the windows of Casspir, the giant vehicle. In the evening, many people sent me appreciation texts; most locals hugged me for the act and discussed me in secret groups. The lack of alternatives and opportunities had made me so rugged that I was struck by the ideas of martyrdom and radical thoughts.

In 2015, I joined the NCC in college, a certificate course that people often join to be eligible for reservation in-state job recruitments. Over time, I went to Nagrota military base with other NCC mates, where aspirants attend classes and do some physical drills along the lines of those performed by police and Army personnel. I met people from other states and it proved to be a fruitful interaction. As usual, I argued with people over the unjustified presence of Indian armed forces. People on the other side were patient, they would listen — they gave me enough space to express myself. Their behaviour got me thinking. I left the military base with a fresh perspective.

The journey of change started. In 2017, at Showkat Ali Stadium, during a sports festival, I met SSP Imtiyaz Hussain Mir, known for his bravery and hard work. I exchanged ideas with him and I realised he is an officer with whom I can interact freely. In 2018, I founded "Save Youth Save Future (SYSF) Foundation, with barely any support. I began to dream of a better future for the young. I sensed that young people are always told stories of death; I thought I must change their perception.

I, therefore, consulted people whom I considered knowledgeable, for ideas. I got some depressing comments and ample positive responses. On February 28, 2018, in a collaborative move, we organised a programme 'The Young Kashmir: The Dialogue Within'. Unexpectedly, the event got a huge response with 400 people participating in it. We had invited people from civil, military and police bureaucracy. A plethora of issues was discussed, grievances were registered and ideas for future course of action were noted by all the administrators present at the event. Hence, the wide gap between people and administration was reduced.

In the middle of 2018, in the summer to be precise, our Foundation started a cricket tournament. Along with other achievements, the SYSF Foundation managed to build a representative character. I was assisted in the process by many fellow stone hurlers. In another move, we made a list of local heroes who have made immense contributions in different areas like sports, academics, music etc. For the finale of the North Kashmir cricket championship tournament, a few officials invited as guests assured the youngsters that more tournaments would be held in the future.

As things moved on, those who believe in violence served me death threats for opening new doors, other than those leading to violence. The online blog 'Kashmir Fight', now known for issuing a list of people to be assassinated in the future, issued threats to me. It was on the directions of the blog that Shujaat Bukhari was assassinated. My natural reaction was frustration and fear. I rushed to the SSP office, briefed SSP Imtiyaz Hussain Mir about the threats. He calmed me down and reassured me no one can kill me if I am not destined to die. The news about threats to my life spread like wildfire, my friends boycotted me, and they feared they could become collateral damage in an attack. In the meantime, I came across Brigadier Girish Kalia. While interacting with him, I got the feeling of talking to a teacher/mentor. I also met Captain Ankur and Major Sushil, my phone calls would matter to them.

In 2019, the Foundation in collaboration with locals in Kupwara organised an event on the theme 'Discuss Issues of Kashmir and not the Kashmir Issue: What Next'. In the aftermath of the abrogation of Articles 370 and 35A, our Foundation resumed business in November 2019, with a new zeal. The first event was Youth Parliament; it was an open interaction between young people and the people in the system. During the interaction, people discussed ideas and some conspiracy theories spread by the political bosses were also squashed.

In the first few months of 2020, our focus shifted to de-radicalisation and we spread our wings to South Kashmir, particularly Pulwama. In 2020, our Foundation gained international character; we were assigned a project by the European Union (EU) to study the trends in radicalisation among young people and how to ensure de-radicalisation. We have a target of 69 workshops on de-radicalisation, with the EU. We have completed 24 workshops so far. In all these workshops, we have been coordinating with former stone hurlers and political rioters. The outcome of these efforts is that we have evolved from a group to a community.

Hundreds of young people have joined us to take the caravan forward. I took my volunteers to JNU for a cultural exchange programme where 120 youngsters from the Valley participated. There, they developed friends, contacts and bonds. The interaction exposed them to reality outside Kashmir. The volunteers were called messengers of peace. In 2020, we included women in our Foundation and formed a women's wing. Young women now discuss issues and challenges they face in society. An outreach effort was launched through sporting events. After some time, women's KPL (Kashmir Premier League) was kicked off; women from all districts took part. In 2021, an event was conducted to laud women achievers in society.

With time, the scope of activities broadened. In 2021, we carried out loss-and-gain exercises to check how violence has destroyed our social ethos and how Kashmiriyat and Sufism have suffered. We are coordinating with maulvis, imams and Sufi peers to help us revive what we have lost in the backdrop of militancy and separatism. Moreover, our team is active on all social media platforms. In all districts, we have a cluster of offices and 40 office-bearers working to achieve our dynamic objectives. We are collaborating with many organisations, along with EU officials, to determine further courses of action.

Wajahat Farooq Bhat is Chairman of, the Save Youth Save Future Foundation. He is based in Baramulla, Jammu and Kashmir. The views expressed in this article are those of the author and do not represent the stand of this publication.