China Going All Out to Demographically Undermine Its Muslim Uighur Population

Aspate of reports published recently highlight the plight of the nearly 11 million Uighurs living in Xinjiang. The Uighurs are a Turkic ethnic group whose members are predominantly Muslim. The reports indicate that China is trying to wipe out their identity and forcibly assimilate them by attacking their culture, traditions, beliefs and reducing their population growth. Collectively these measures are suggestive of grave human rights violations. 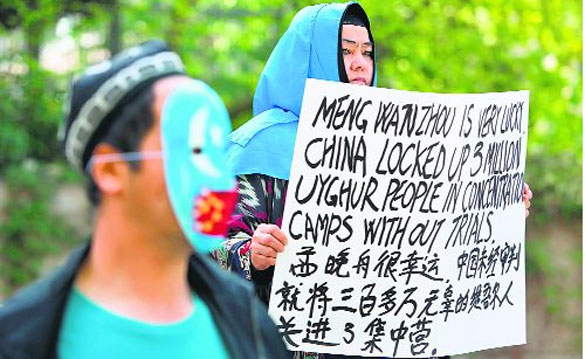 The brutal crackdown dates back to at least 2009 when there were violent clashes between Uighurs and Han Chinese in which about 200 people, mostly Han, were killed. The crackdown was intensified following the visit of President Xi Jinping to the region in 2014. Since 2017, the authorities have set up detention camps called ‘vocational education and training centres. The International Consortium of Investigative Journalists has accessed classified Chinese government directives that provide operational plans for the detention centres and orders for carrying out mass detentions guided by sweeping data collection and artificial intelligence. The camps, reminiscent of the Nazi-era concentration camps, are believed to have contained between one to two million Uighurs since 2017. Leaked videos showed prisoners being led from a train, while under heavy guard, shaved, blindfolded and shackled. Reports indicate rampant torture, forced labour and ideological ‘training’.

Another report from the Canberra-based Australian Strategic Policy Institute (ASPI) indicates that about 80,000 detainees have been transferred to 27 factories across China since 2017. Such factories were involved in producing goods for 83 global brands. Advertisements for ‘government-sponsored Uighur labour’ have begun to appear online. One ad read: ‘The advantages of Xinjiang workers are: semi-military style management, can withstand hardship, no loss of personnel… minimum order 100 workers!’

Uighurs, who are subjected to ubiquitous surveillance, have been detained not for crimes but for things like contacting people abroad, attending mosques, having more than three children, sending texts containing Quranic verses, wearing headscarves or long beards, declining to eat pork, or having travelled abroad. Many have also been picked up for using a popular app known as Zapya.

In a bid to eradicate Uighur identity, China has directly tackled Islamic beliefs. One measure has been to destroy mosques and cemeteries that had existed for hundreds of years. According to CNN, over 100 cemeteries have been destroyed in the past two years. One such is the Sultanim cemetery in Hotan that had existed in one form or another for over 1,000 years. According to satellite images, it was flattened by 2019 and part of it is now a parking lot. One demolished mosque has made way for a public toilet. Other measures include prohibiting residents from wearing the burqa in public, asking mosques to raise the national flag to ‘promote a spirit of patriotism’ and a ban on fasting during Ramzan.

Efforts are also being made to demographically undermine the Uighurs. According to a report of Adrian Zenz for the Jamestown Foundation, China is using pregnancy checks, forced intrauterine devices, sterilisation and abortions to reduce the population of Uighurs and other Muslims in Xinjiang. The authorities planned in 2019 to subject at least 80% of women of childbearing age in four rural southern prefectures to intrusive birth prevention surgeries. In 2018, 80% of all new IUD placements in China were performed in Xinjiang — despite the fact that the region made up only 1.8% of the nation’s population.

This campaign has been successful. Birth rates in the mostly Uighur regions of Hotan and Kashgar went down more than 60% from 2015 to 2018. Birth rates have nose-dived, falling nearly 24% last year alone, compared with just 4.2% nationwide.

There are also reports about medical testing and forced organ harvesting. Such measures fall within the purview of the 1948 Genocide Convention that defines genocide as ‘imposing measures intended to prevent births within the group’. International criticism is slowly gathering steam. In 2019, Turkey had condemned China’s treatment of the Uighurs, but under pressure, President Erdogan soon backed down.

The West has been more forthcoming. The US has imposed sanctions against party officials implicated in rights abuses. An initiative has been launched to boycott the Beijing 2022 Winter Olympics unless ‘significant improvements’ were made in the treatment of the Uighurs by January 2021.

Pakistan, which otherwise projects itself as the champion of Muslim rights, has been silent on this issue. When asked, Imran Khan took the shocking plea that he did not know much about it, adding that China had been a great benefactor. Pakistan’s silence has not only demolished its credibility to talk about the Kashmir issue but also it is likely to face a backlash from its own religious groups unhappy with what China is doing. Reports indicate anger and severe criticism of China over its persecution of the Uighurs in the journals of such religious groups, something that Pakistan would find difficult to ignore for long.

China’s position is that the camps are voluntary vocational training centres that have been designed to eradicate religious extremism and violence. As proof they cite that Xinjiang has not experienced a terrorist attack since December 2016. What China has not been able to explain convincingly is the growing international outrage at the atrocities. No amount of rhetoric about terrorism can justify the forcible sterilisations and abortions, massive detention and forced labour camps, and attempts to erase the Uighur identity.

Tilak Devasher is a Member, National Security Advisory Board. Views are personal