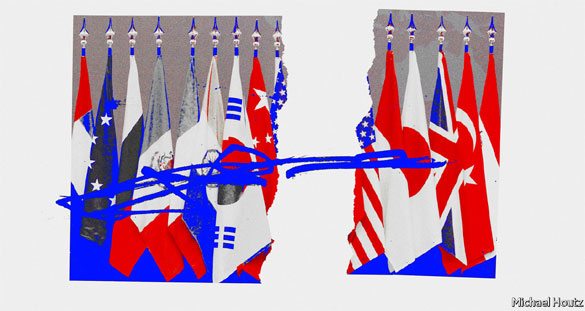 IT WAS MOMENTOUS and yet somehow anticlimactic. On August 13th President Donald Trump announced—via Twitter, of course—that Israel and the United Arab Emirates (UAE) would establish full diplomatic ties. It would be Israel’s first formal relationship with a Gulf state and its third with any Arab country. In exchange Israel would shelve plans to annex parts of the occupied West Bank, which the prime minister, Binyamin Netanyahu, promised to do during his three most recent election campaigns. “This normalisation of relations and peaceful diplomacy will bring together two of America’s most reliable and capable regional partners,” read the statement accompanying the president’s tweet.

The gravity of the moment seemed lost on the president: an hour later he was tweeting about college football. His counterparts could not agree on what they had agreed on. Muhammad bin Zayed, the crown prince of Abu Dhabi and de facto ruler of the UAE, was cautious, saying the deal was merely “a road map” to a relationship. Mr Netanyahu was more ebullient: he said there would be embassies and direct flights between the two countries.

The timing was a surprise, the details unclear—but the outcome was not. Israel has spent years cultivating ties with Gulf states. Spymasters and military officers share intelligence. Gulf monarchs snap up Israeli-made surveillance kit. Some bilateral relations have been conducted in public, too: in 2018 Miri Regev, then the minister of culture and sport, visited Abu Dhabi to watch an Israeli team take part in a judo tournament. Mr Netanyahu himself made a public visit to Oman in 2018 to meet the late Sultan Qaboos.

For Mr Trump the announcement is a diplomatic victory—not the sort that swings an election, but a success at a time when his administration, battered by covid-19 and a dismal economy, has few others. It will be a temporary boost for Mr Netanyahu as well, who may soon finagle a fourth election in order to dissolve a power-sharing deal with his former rival, Benny Gantz. The agreement with the UAE lets him duck the question of whether to annex territory, a dream for his right-wing allies but one that brought much international opprobrium.

It will also shore up a strategic partnership, though perhaps not the one Mr Trump thinks. America sees Israel and the UAE as linchpins of its effort to contain Iran. But the UAE does not fear Iran the way Israel and its Gulf neighbours do: Iranian firms do business in Dubai and travellers fly back and forth. The Emiratis worry more about political Islam. Their arch-rival in the region is not Iran but Turkey, which backs Islamists across the region and maintains a garrison in Qatar, the bête noire of the Gulf states that is friendly to the Muslim Brotherhood. Israel, too, shares Gulf leaders’ concerns about Islamism.

The UAE’s willingness to let Mr Trump act as midwife to diplomatic ties may reflect a belief that he is not long for his office. The UAE and other Gulf states have embraced the president as someone who would give them free rein in the Middle East and not ask too many pesky questions about human rights. He has fulfilled those expectations, though he has not been the sort of steadfast ally they hoped for: Gulf leaders were jolted by America’s non-response to a string of Iranian attacks last year, particularly the drone-and-missile strike on Saudi oil facilities in September.

Their support for the president has cost them with America’s Democrats. Still, the UAE is adept at the Washington game, and has begun to prepare for a possible change of power next year. Last summer it withdrew most of its troops from Yemen, where they had fought for four years in a Saudi-led campaign against the Houthis, a Shia rebel group that receives support from Iran. The UAE had its own reasons for leaving—the war was at a stalemate—but the withdrawal also distanced it from a conflict that has become deeply unpopular in Washington. Now it has established ties with a country that still retains much bipartisan support in America, despite Mr Netanyahu’s close embrace of Mr Trump, positioning it well for a post-Trump era.

Ignored as ever are the Palestinians, who say they were not informed in advance. “May you never be sold out by your ‘friends,’” Hanan Ashrawi, a senior official, angrily tweeted at the Emirati crown prince. Gulf rulers are unlikely to care. They tolerate no dissent at home. Some Emiratis, particularly younger ones, harbour no animosity towards Israel nor much sympathy for the Palestinians, an attitude shared across the Gulf kingdoms, where many remember the Palestinian leadership’s support for Iraq’s invasion of Kuwait in 1990.

When Egypt made peace with Israel in 1978, it reorganised the region: the biggest military threat to Israel had been neutralised. Egypt, the Arab world’s political and cultural heart, was ostracised for abruptly quitting the decades-long fight against the “Zionist entity”. The UAE was never part of that fight. Latterly, its ties with Israel were secret in name only. And it did not demand any real concessions to make them official—merely that Israel not do something it may not have done anyway. Instead of changing the region, the agreement between Israel and the UAE simply reflects how the region has already changed.