Trudeau and BCMA Make a Mockery of Piety and Politics

In the 2004 general elections, an ugly incident of bigotry took place inside a mosque run by the British Columbia Muslim Association (BCMA) that went largely unreported.

It would have remained so had it not been for the recent visit to BCMA’s mosque in Surrey, B.C., by Liberal Leader Justin Trudeau. 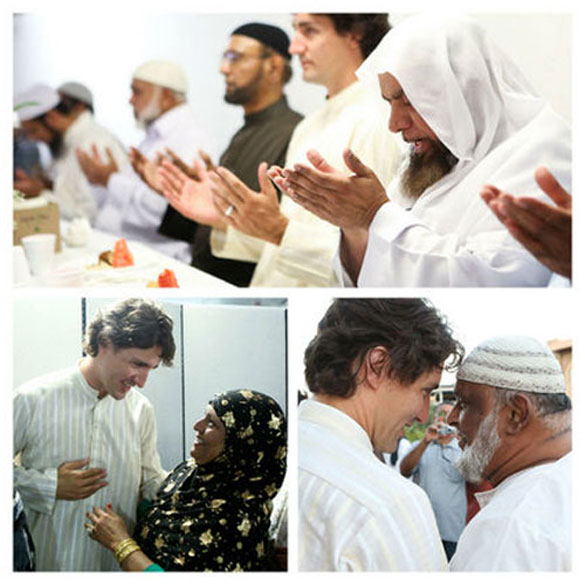 On Friday, June 11, 2004, Itrath Syed, the NDP candidate in the riding of Delta-Richmond East requested permission to speak to the BCMA mosque congregation and introduce herself as well as her party.

After all, not only was Syed the sole Muslim candidate in British Columbia, but she and her family have been long-time supporters and members of the BCMA.

However, instead of an opportunity to address the other Muslims attending the Friday congregation, Syed was not allowed to even approach the front of the mosque, let alone sit in the front row. Instead she had to take a back seat and endure what the website MuslimWakeUp.com (MWU) described as a scorching sermon.

Itrath Syed was a woman and she supported the NDP platform on same-sex marriage.

The BCMA cleric told the congregation, Muslims who support same-sex rights that he described as a “Fahisha” (an indecent sexual act) will never get the community’s support.

On the verge of tears, Itrath Syed left the mosque feeling humiliated and betrayed.

Fast forward to August 2013. The same British Columbia Muslim Association that shut out a young Muslim women politician because she supported same-sex rights, rolls out the red carpet for a non-Muslim Justin Trudeau, who as it happens, also supports same-sex marriage.

Neither the BCMA nor Trudeau found this double standard a problem.

Next, Trudeau is welcomed to participate in the ritual prayer where we Muslims face Mecca and prostrate our heads to the ground to show our subservience to Allah and to proclaim our steadfast belief in Islam.

The Liberal leader sat next to the Imam, raised his hands Islamic style and prayed in the front row of the mosque while Muslim women sat in the back rows as second-class citizens. Trudeau had no problem with this gender apartheid. He was later permitted to address the congregation.

No non-Muslim is permitted to participate in our ritual prayers unless he has taken the oath of Islam and declared that Muhammad is the last Prophet of God and that the worst sin is ‘shirk,’ the belief that Jesus is the son of God.

Perhaps Justin Trudeau has in secret converted to Islam. After all, the Liberal leader in his own words told an audience in Calgary that he visits mosques in his riding of Papineau, among them a Wahabi mosque to “deepen my understanding and knowledge of Islam.”

The fact that Wahhabi mosques preach the most dangerous form of Islam and anti-West hatred seemed to be of no concern to the Liberal leader.

What was equally bizarre at this mosque was that while Trudeau dressed up as a fake Pakistani, his hosts who were of Pakistani ancestry dressed up as fake Arabs.

What a mockery of piety and politics. As if God was being entertained at a fancy-dress competition.

My question to Mr. Trudeau: How did you reconcile with the gender apartheid being practised right before your eyes in the BCMA mosque?

My question to the BCMA is this: Have you reversed your position on same-sex marriage?

If not, why did you allow Trudeau to sit in the front row and speak to the congregation, while barring Itrath Syed, a Muslim sister of yours because she defended gay rights?