Genesis of the Jamaat

Addressing last week’s Jamaat-e-Islami’s (JI) annual gathering in Lahore, former JI Ameer Munawwar Hasan said that it was beyond the system based on elections to overcome the challenges being faced by Pakistan. “The problems of the society… can only be resolved through adopting and promoting the culture of jihad and Qatal in the country. We need to wage jihad in the way of Almighty Allah along with democratic struggle to eliminate oppression and injustice from society.” 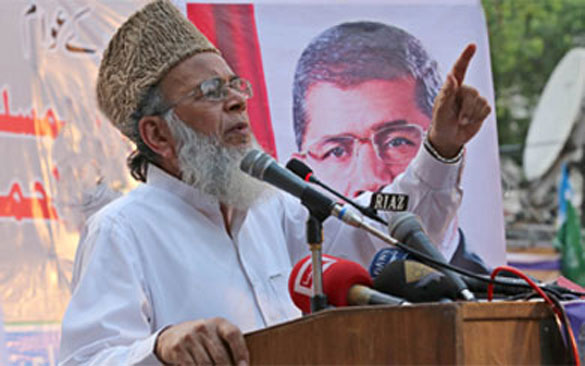 Does Munawwar Hasan know the implications of his views?

Does Munawwar Hasan know the implications of his views? Will this Qatal be against Pakistani security forces, political and religious leadership, parties or the entire system? Is the state on the wrong side and Taliban on the right or vice versa? Does JI support al-Qaeda?

It is ironical that he was the Ameer of JI and a successor of Maulana Maududi. Did Maududi write his famous book Al jihad Fil Islam on the strategy of Qatal in a Muslim society? Munawwar Hasan himself has never visited the battlefield himself or allowed his family members to go to the frontline. His assertion is likely to be misconstrued as an invitation/permission for violent reformation struggle.

Munawwar Hasan represents a narrative in Pakistan that has many buyers. This narrative looks at democracy and electoral system as a hurdle in change. He dreams of an Islamic revolution, favours use of force to coerce compliance to Shariah, doesn’t accept the state boundaries and believes in Ummah as a political concept, sympathises with militants and considers them Mujahideen, thinks suicide attacks and terrorism are planned and executed by local agencies or Raw, CIA, Blackwater and attributed to Muslims to malign Islam, opposes military operations against militants and urges talks with them and so on.

He is not alone in these views. And there are many reasons — our dysfunctional system of justice and social services delivery system has disillusioned the masses. Private TV channels, intellectuals, religious class and state institutions have played their role to perpetuate and expand this disillusionment. Anti-democracy sentiments have spread especially in religious parties which have traditionally received negligible electoral success. The JUI F talks of democracy, for it have enjoyed sufficient electoral benefits.

JI at A Crossroads

Earlier, Munawwar Hasan had said that JI shared the same ideology with TTP and that the difference was in the tactics that JI employed. But how could JI, a political party that believes in democracy and constitutional rule within Pakistan, and al Qaeda and TTP, militant violent outfits that work for global Khilafat, have same ideology.

Munawwar Hasan represents a narrative in Pakistan that has many buyers. This narrative looks at democracy and electoral system as a hurdle in change. He dreams of an Islamic revolution.

There is no room for violent means in the JI strategy. Article 5 of the JI Constitution spells out that for the desired reform and revolution, the Jamaat shall use democratic and constitutional means, i.e., the use of advice and propagation of thought for reforming the mind and character, and preparing public opinion for accepting the desired changes and that this struggle for the realisation of its objectives shall be open and public, and not on the pattern of secret movements.

JI has several advantages vis-à-vis its rivals — discipline, countrywide support, internal democracy and simplicity. Even though Siraj ul Haq, Ameer JI, says ballot paper is the only source of power and reformation, JI is at a crossroads. It has to decide whether it prefers the successful peaceful democratic Turkish model or the failed reactionary/violent Algerian and Egyptian models.

It has to decide whether it has to maintain status quo in its targets, ideology, structure and strategy. Or it has to become an ultra right militant group like al-Qaeda and TTP, or it reviews its plans and performances in the light of careful analyses of failure of Egypt’s Muslim Brotherhood and Turkey’s Justice and Development Party, to shape anew its political vision and mission and become a modern party.

Jihad is not synonymous with terrorism but opinions differ on what constitutes true jihad. For example, al-Qaeda and TTP assert that they fight for Islam; what is jihad for them is terrorism for others. There is no concept of war without state permission. War has only to be declared and managed by the state and government.

Similarly, administration of justice and execution of punishment is also the sole authority of the state. Women, sick people, children, animals, crops and non-combatants cannot be targeted. And desecration of bodies and targeting of religious places is not allowed.

All big religious schools of thought agree over this. There is no exemption for anyone.

Maulana Maududi never approved of jihad by private outfits. He had even outlawed jihad in Kashmir in 1948 for Pakistan had infiltrated private fighters there without any formal declaration of war. Had he been alive, he certainly would not have liked JI’s militant leanings.

Covert War against State(S) Having Diplomatic Relations with Pakistan?

Maulana Maududi refers to Surah Anfaal 8:72, which says that Muslims are not allowed to indulge in secret subversive activities against infidels. He explains: “If we get into a dispute with a nation we are associated in a treaty with, and we realise that dialogue or international arbitration is not helpful in resolving the conflict or that it is bent on using force, it is legitimate for us to use force for its resolution. But this verse makes us morally bound that this use of force should come after clear and open declaration. To undertake covert armed activities, which we are not ready to admit openly, is an immorality which is not taught by Islam.”

Muslim States Responsible Only For Their Own Citizens

In this verse, it has also been mandated that Islamic state is in no way responsible for the Muslims living outside its border. Maududi explains: “The responsibility of the Islamic states, as per this verse, is restricted to those living inside its borders….thus Islam has uprooted the very dispute that often originates from international complexities because when a country takes it upon itself to support some minorities living in other countries, it creates such anomalies that cannot be even solved by recurrent wars.”

Ummah is a spiritual concept but it is unfeasible as a political ideology. Unity is witnessed in Hajj which is a religious gathering. However, when Muslims come together in UN, OPEC, OIC, ECO etc which are political or economic entities, each country tries to safeguard its own interests for the ruler of each is the guardian of his nation who is accountable to/for his subjects. And when religious sects/parties cannot tolerate their rivals in other sects and in political struggle/fields and don’t unite into one, how could they argue for global Muslim Ummah neglecting state boundaries.

Muslims live in different countries and though they have sympathies with Muslims, every state pursues its own national interests first.

Siraj ul Haq as a political leader prefers his party interests. As KP Finance Minister, he is not ready to share KP benefits with other provinces. At individual level, a Muslim doesn’t let stranger “Muslim brothers” enter his house or let them construct house on his land. Can he travel to another country without a valid visa issued by the other state from the Muslim Ummah? Where is Ummah in this equation?

Religious parties are confused over the genesis of terrorism. Terrorism can either be the work of foreigners/non Muslims or of extremists who are unhappy with the foreign policy. It cannot be two things at the same time. If it is the work of the former, there should be no reason to attribute the rise of terrorism to our alliance with the West and to suggest withdrawal from the coalition or talks with them as the prerequisite for peace in the region. And if it is committed by extremists, foreign agencies get automatically absolved of the blame.

Even if, as they say, Pakistan’s alliance with the West is the only reason for terrorism in Pakistan, does this justify the violence perpetrated by the extremists? They are yet to openly declare the TTP’s strategy unjust and un-Islamic.

Tahir Ali is an academic and a freelance columnist. He blogs at tahirkatlang.wordpress.com