A Bleak Future for Libya?

"I don't see how things are going to get better." There was a long pause before he answered... his eyes squinted as he thought, shaking his head.

This elderly gentleman had struck up a conversation with me as we were filming in Tripoli. "We are all Muslims, why do those with the beards think they are better, and do these horrible things. They do not represent Islam." 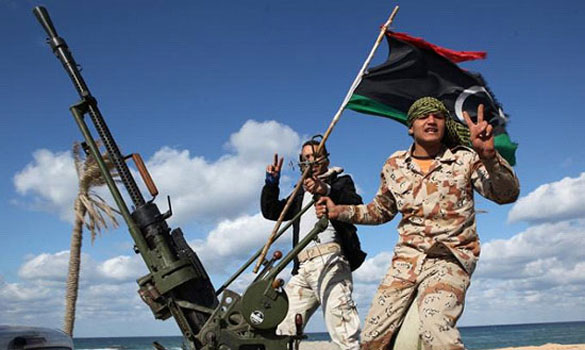 That is a narrative you hear a lot here in Libya. It is far too simplistic to say that this country is divided along liberal or Islamist lines, but the recently launched "Operation Dignity" by the retired general Khalifa Haftar against what he calls terrorism - extremists groups accused of killing members of the security forces, judiciary and opposition voices - has gained support.

Many of the supporters are appealed by Haftar's idea of ridding the country of rebel elements, and not by the man himself. But his recent statements do not reflect the reality on the ground. He has not been able to make any headway in Benghazi against the groups he accuses of terrorism, like Ansar al-Sharia. The group gave a televised press conference on Tuesday night where it called Haftar's operation a "crusade against Islam", warning the former general that if he continued his fight, Muslims from across the world would come to fight against him "like what is happening in Syria".

However, one thing that is clear when you speak to people here is that they are fed up. They want a strong government with an army and a police force. This has failed to take shape in the almost three years following the overthrow of Muammar Gaddafi.

Gaddafi left this country with no institutions, no army and no police force, so this transition will likely take time.

Successive governments have failed to tackle the pressing issue of the many militias. Heavily armed groups have increasingly become the ultimate power here. Many are on the government's payroll, helping them provide security. One Libyan analyst tells us that in the end they are loyal to no one but themselves- and this ever shifting narrative is becoming a major problem.

Libya is quite possible facing its biggest crisis since the overthrow of Gaddafi. Libyans will tell you that it is impossible to predict the future of their country.

The US, EU, Italy, Spain, UK, France, the Arab League, among others have all appointed Libyan envoys which is testament to the fact that the international community has a vested interest here. Western governments are watching closely. This is a country rich in oil and gas, and it lies on Europe's doorstep. Italy is hugely dependent on Libya for its energy needs.

The recent appointment of Prime Minister Ahmed Maiteg is filled with controversy over vote quotas and whether he ever did get enough votes in the General National Congress to win the post. His supporters say he is the man to unite the country. Those opposed to him, disagree. Finding someone everyone agrees upon in this fragmented society will be difficult.

But it is the Libyan people who are left to endure their country's lawlessness. To add to the violence, crime is becoming an issue. Carjacking are a big problem in Tripoli, and there have also been a few bank heists in recent weeks. People feel there is no one to protect them.

That's what the gentleman at the coffee shop tells me too. He says the hope and the excitement in the country after the revolution has gone: "In 2012 we still had hope... we had all the problems, but we believed slowly they would be fixed. But they have only gotten worse."