Kerry's international party should be trying to aid the Kurds, our friends and the mortal enemy of ISIS, instead of trying to lavish more international funds on Hamas and Fatah -- two sides of a movement dedicated to destruction.

For the moment and against the odds, Kobani stands. Kurdish men and women, abandoned by the United States and watched but not aided by Turkey, hold the line against the sweep of ISIS across Iraq and Syria; one little point of heroism that may be gone by the time you read this. ISIS, on the other hand -- well-financed, armed, vicious, and fighting on toward Baghdad -- will assuredly not be gone.

So the Cairo meeting of Secretary of State John Kerry with UN General Secretary Ban Ki Moon and representatives of the EU, Qatar and Britain this weekend was probably a good thing, right? Just last week, a UN envoy was worried that massacres at Kobani would rival Srebrenica in the Bosnian war. Coordinated with President Obama and NSC, State and DOD meetings in Washington, an international meeting might decide a) how to take immediate steps to protect the tens of thousands of people left in the unfortunate city, b) how to pressure the Turks to provide serious support, and c) how the U.S. "air only" war plan needs to be revised in the absence of "allied" troops on the ground.

Since no battle plan survives first contact with the enemy, and this one survived less well than others, there is no shame in moving to Plan B. Except they were not discussing Kobani.

They were trying to raise $4 billion for the Gaza Strip, to remove the evidence of Hamas's rocket war against Israel and its own people. Israel was not represented.

The Cairo meeting, the brainchild of Egyptian President Sisi, appealed to Kerry, who appears still to think Palestinians hold the key to glory if not peace. Qatar pledged $1 billion, the U.S. $213 million, the UK $32 million and the EU 450 million Euros. In the court of international organizational politics, Kobani loses and the Palestinians, including the terrorist group Hamas, win. 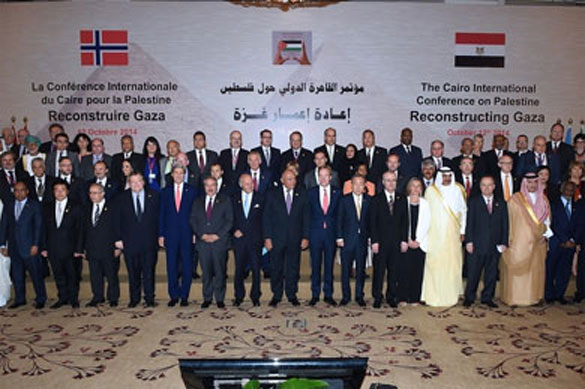 Can anyone spare some change for the Kurds of Syria? Above, U.S. Secretary of State John Kerry (front row, 5th from left) in a group photo at the Gaza Donors Conference in Cairo, Oct. 12, 2014. (Image source: U.S. State Department)

The real winner is Mahmoud Abbas, the man on whom the Palestinian fixation of Europeans and Americans can be focused. Abbas was said to be doing all he could to ensure that a "third intifada" did not break out. He is promoted as "not-Hamas," a partner for European, American, and NGO money that could be used without fear of rearming Hamas or rebuilding of tunnels. Everyone conveniently ignored the Hamas-Fatah "Unity Government", which met in late September to announce agreement on most major points -- although not whether or how to place Hamas military assets under Fatah control.

If Kobani is shamefully not on their minds, at least a few points might be considered before running billions of dollars more through the corrupt and kleptocratic Palestinian Authority [PA]:

Abbas and the PA engage in ongoing and vicious incitement not only against Israel, but against Jews, and look the other way when incitement results in violence. Abbas's government hid the murderers of three Israeli teens for two months before the IDF found them. Abbas took no steps to assist Israel in its manhunt, even though the IDF increased security for the PA by arresting nearly 100 Hamas operatives during that time. Palestinians were told to place multiple calls to the Israeli Police emergency number to stymie real calls that might come in. In particularly revolting displays, Palestinians walked near Jews waving three fingers, signifying the three kidnapped students; staged "re-enactments" of the kidnapping with the boys portrayed as soldiers; and gave candy to their children to celebrate their deaths.

Since August, a low-level intifada has, indeed, been going on, primarily in Jerusalem and its environs. The light rail line from the suburb of Shuafat into Jerusalem, designed to bring Palestinians into central Jerusalem has been vandalized several times. Palestinians have vandalized graves on the Mount of Olives Cemetery, thrown rocks and firebombs at a Jewish nursery and day-care centre and more, as can be seen here and here.

Incitement goes along with preparations for war. Fatah also claims to be producing rockets, showing Russian Television a West Bank production facility. A Palestinian journalist told RT, "The moment (Gaza) ended, the Palestinian military wings renewed military production in order to replenish the stock, which was emptied during the war." The indispensable Palestinian Media Watch has "documented that PA Chairman Mahmoud Abbas himself has said a number of times that he opposes violence against Israel only because it is not currently in the Palestinian interest. He has given two main reasons for this. First, Palestinians are not prepared militarily, and second, a war would heavily damage the infrastructure in the Palestinian areas."

Abbas and the PA have been corrupt stewards of international funds, here, here, here, here, and here for starters. The PA claims Hamas stole $700 million, but European auditors say Fatah is no better: see here and here.

Abbas broke his commitment to the U.S. not to engage in attempts to use international institutions -- including the UN and the International Criminal Court -- unilaterally to press claims against Israel. His UN speech about Israel as a genocidal monster prompted even the State Department to condemn it as "provocative."

Fighters in Kobani have found ways to slow down ISIS over the weekend, but lack serious weapons and intelligence to advance their position. Under the circumstance of immediate and critical fighting, Kerry's international party should have been trying to aid the Kurds, our friends and the mortal enemy of ISIS, instead of trying to lavish more international funds on Hamas and Fatah -- two sides of a movement dedicated to destruction.