Kanpur Women Have Taken Charge of NPR, NRC Protest and They Know What They Want

Sitting cross-legged in the crowd, Rafia was diffident. Even when she did speak, other women soon talked over her. 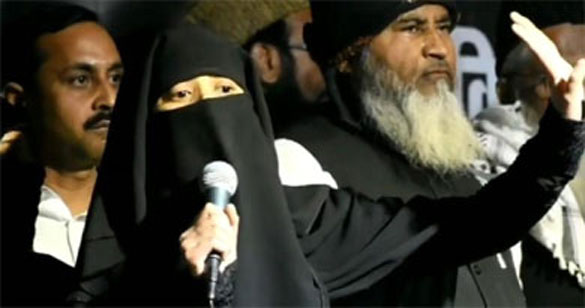 A young protester offers a point-by-point rebuttal to Kanpur's senior-most Muslim cleric after he suggested that the protests be wound up. | Aly Sultan/Instagram

But then she got a tap on the shoulder, indicating that she should go up on stage. A sudden change occurred. Rafia delivered a confident speech on the National Population Register, urging Indians to boycott the exercise. “When the NPR person comes, feed him well, get him hot tea,” she said, her eyes twinkling, her voice steady. “And then tell him to go back.”

At Kanpur’s Chamanganj, Rafia wasn’t the only one whose life has been transformed by the Narendra Modi government’s new citizenship initiatives. For the past six weeks, women from the city have taken over Mohammed Ali Park to demand that the government roll back the Citizenship Amendment Act, which offers a fast track to citizenship for illegal immigrants from Pakistan, Afghanistan and Bangladesh – except if they are Muslim.

Yet, while the NRC is their ultimate target, the unprecedented actions of these Kanpuriya women have already resulted in many other changes along the way. Most remarkably, women have resisted repeated attempts by the local administration to end the protest – even using force to try to do so.

But it’s not only politics: this unique protest is ushering in social changes too. Women are organising spontaneously, without the traditional networks of local leaders and religious heads. Social media is being used, both to communicate with other residents locally and to learn from the experiences of protestors in other parts of the country.

The result of this completely new politics is that Kanpur’s local Muslim leadership has broken down. Any engagement with the Uttar Pradesh’s Bharatiya Janata Party government and its administrative apparatus is enough to completely discredit anyone, no matter how eminent. The cause is so urgent – to save citizenship and the Constitution – that almost anything that stands in the way of the women of Chamanganj is being swept away. 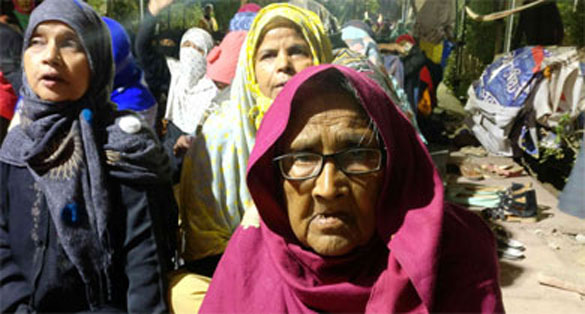 The protests in Kanpur’s Mohammed Ali Park started early in January, inspired by Delhi’s Shaheen Bagh sit-in. The agitation began on a low-key note, with people gathering in the small park in the evenings.

Within a month, the protest had swelled to become a 24x7 sit-in. Women gave speeches, sang patriotic Bollywood songs and, of course, criticised the Modi government’s decision to base Indian citizenship on religion. The main protest area is occupied by women, many of them in face-covering Niqab, sitting below photos of Gandhi, Ambedkar, Azad and a large Indian flag. A banner in Hindi calls the protests an “indefinite Satyagrahi to oppose the CAA-NRC-NPR by the women of Kanpur”.

Men are also present – but in distinctly offstage roles. Young men – often related to the protesting women – handle minutiae like cleaning the place during the day or setting up the public address system. A larger group of men also hang out at the back of the park, watching the hectic activity at the protest. They are aware that this is not their show, even if they are welcome as spectators.

Qamar, a 24-year old woman, explained why they had gathered at Chamanganj. “We have been told to do Purdah. But we have only come out here to sit in this park to save India’s Constitution,” she said, as a crowd of women gathered behind her, nodding and agreeing. “We didn’t come out to protest the lynchings. Didn’t come out when Babri was taken from us [when the Supreme Court in November allowed a temple to be built on the site of mosque demolished by Hindutva supporters in 1992]. But now the Manuwadi [casteist] BJP thinks it can throw away the Constitution. We won’t let that happen.”

This political awareness extends even beyond the NRC. “There is so much crime in Uttar Pradesh,” said an exasperated Naz, 44. “Every day we hear a new instance of rape and murder. Why have they left all that and concentrated all their energies on NRC? This is only to distract people from the real issues.”

The BJP’s attempts to demonise Shaheen Bagh for the Delhi elections are part of the Kanpur protest too. “The prime minister and other people in the government are our ideals,” said Qamar. “We want to respect them. But then these very same people are talking of shooting people dead. What do we do?” She was referring to the chant “Desh Ke Gaddaron Ko, Goli Maaro Saalon Ko”, shoot the traitors, that was heard at several Bharatiya Janata Party events in the run-up to the Delhi elections.

While inspired by Shaheen Bagh, the roots of these unique women-led protests go back even further. “Modi has killed every businessman in this area with GST,” or the Goods and Services Tax, argued Sofia, 37. “And with demonetisation he stole every woman’s grocery money. And now he wants to throw us out using NRC. How long will we remain silent?”

This belligerence is not limited to speeches and media interviews but also visible when they face the Uttar Pradesh police. The Adityanath government has made it clear that the democratic right to protest stands suspended in Uttar Pradesh. It used brutal force against peaceful protesters through December and January.

The women of Chamanganj, however, have gone toe-to-toe with the Kanpur administration – and won.

Several attempts were made by the Kanpur administration to end the protest in January. This mostly involved meeting with local community leaders in Kanpur. At least twice, senior district and police officials came to the park to accept memorandums – a time-tested technique for ending protests.

Except, it didn’t work this time. The women kept on occupying the park.

On February 7, the administration used a trump card, coercing two Sheher Qazis – the top Islamic clerics in Kanpur city – to come down to Mohammed Ali Park and issue an appeal that the protest be wound up. “We did it since there was so much pressure from the administration to end the protest,” explained a harried Abdul Quddus Hadi, the Deobandi Sheher Qazi who was part of the delegation.

This didn’t work. The qazis were criticised as selling out to the administration, and ignored. The women continued the sit-in. 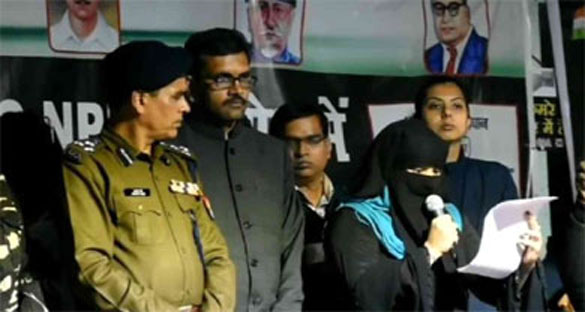 In the end, the Kanpur administration resorted to force, surrounding the park with police in the early hours of February 9. “The police made this into a garrison at 2.30 am,” one woman who was there at the time told Scroll.in. “They mocked us: ‘Dharna Degi? Jisko Dharna Dena Hai, Police Jeep Main Baitho.” If anyone wants to protest, protest in the police jeep.

A lathicharge followed, clearing out the park. But it was to be a pyrrhic victory for the government.

The police action resulted in widespread outrage sweeping through Kanpur, powered by social media messages. “Dusre Din, Bhar Bhar Ke Auraten E-Rikshaw Main Bath Kar Ayin. Aur Sarko Par Baith Gayin,” an exasperated local leader who was involved in the effort to end the protest told Scroll.in. They came in droves, in e-rickshaws. And sat down on the roads.

Just as the old style of Kanpur politics – of using community leaders to diffuse popular movements –had failed, the standard way of simply using force had backfired too. “We were only protesting peacefully,” said an angry Munni Begum. “How can the police beat women like that? That is why we sat on the roads.”

For two days, the women occupied the congested roads of Chamanganj, arguing with policemen and local leaders. “What is wrong in protesting?” one angry woman argued with a policeman during the street sit-in. “If Gandhi could do it, why not us?”

A solution was found to this impasse: let them back into the same park they had been kicked out of in the first place. The police, which had just ejected them from the park, acquiesced quietly. It was better than having them on the streets. 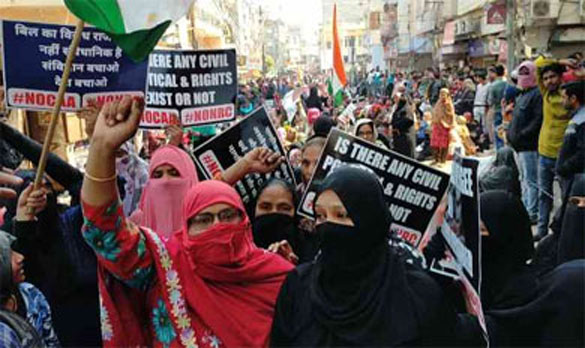 Women occupy the streets of Chamanganj after being evicted from Mohammed Ali Park by the police.

A vexed Abdul Quddus Hadi, the Sheher Qazi, is clear that he shares the aims of the protesters, but not their means. “Earlier people would listen to the Qazis,” he complained to Scroll.in. “But now people are calling us Dalals and Mukhbirs [agents and informers of the administration]. I cannot understand why they aren’t listening to us.”

He added: “People like us need to leave the field now. Jahan Humein Izzat Milegi, Hum Wahan Jayenge. Zillat Aur Ruswai Ke Liye Koi Kahin Nahin Jata.” We will go where we get respect. No one enters a place to be insulted.

Quddus’ concern about this own irrelevance is well placed. Not only him, the truculence of the protesters in Mohammed Ali Park has swept away the entire local leadership of the Chamaganj area. Earlier links with which the police would use to control activity seem, at the very least, dormant if not broken.

Even family life seems impacted. To target the protesters, the police went to their houses and pasted notices that complained about “a large number of women” who were violating section 144. “I am newly married and you can imagine the impact this had in my sasural,” Qamar explained. “But everyone knows that this is for a larger cause.”

Said another woman: “Modi thought Muslim women were weak and needed to be saved. But today is is we who are asking him questions and he is hiding his face.”

When this reporter asked for her name, she thought about it. Fear of action from the police still hangs over the park. “Aap bas yeh naam likh dijiye: Bharat ki beti,” she said.

You can put my name down as “India’s daughter”.