Forty-one years have passed since the establishment of the Islamic Republic of Iran. Before ascending to power and while in Paris, the republic's first supreme leader Ayatollah Khomeini had insisted on equality among all Iranians in his many speeches and declarations. He said that Muslims, non-Muslims, men and women will all be free and have equal rights in the Iran that he promised to build. Unfortunately, he went back on his word from the moment he rose to power. 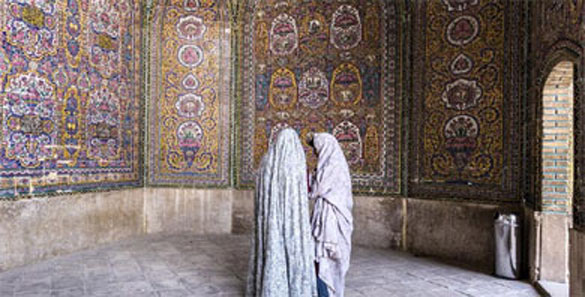 A woman can reach high positions in her career. Yet a married woman cannot travel without her husband’s permission. This leads to interesting paradoxes

The revolution succeeded on February 11, 1979 and, on March 8, the nationwide radio broadcast announced that women who worked in the public sector should wear a veil. Until then, it was not obligatory in Iran. Many women opposed Khomeini’s declaration but, as a result of government-led violence and oppression, it became the norm. Two years later, it became mandatory for women to wear a coat to cover the body and a scarf to cover the hair when they stepped out of the house; violation of this law was a punishable offence. It is interesting that, according to this law, any woman living in Iran – Muslim or non-Muslim, Iranian or non-Iranian – should follow the law, when in fact non-Muslims are not be obliged to be veiled. Forcing women to be veiled is not correct and even Muslim women in Iran want to be able to decide for themselves what clothes to wear.

Women in Iran are not against the veil, they are against the fact that it is compulsory. They believe that they should be free to wear whatever they want. Having been deprived of that freedom, a number of women are enduring heavy punishment in prisons simply because they lifted their veils on the streets or declared that they were against the practice being made compulsory.

In the immediate aftermath of Khomeini’s victory, there was no ratified constitution, Parliament or president. The country was governed by a committee called the Council of the Revolution, and using its interim powers, passed a law that allowed any Muslim man to marry up to four women. Polygamy was previously allowed only for a second spouse and was possible only if stringent conditions were met. However, such conditions were done away with, and men were allowed to have four wives. Before the revolution, mothers were allowed to have custody and the guardianship of their children but they lost this right thereafter. Following years of struggle, they have been able to recover child custody rights, but are still deprived of guardianship. In other words, they do not have the ability to administer the financial affairs of their children; in fact, paternal grandfathers have priority over mothers.

A woman can reach high positions in her career. Yet a married woman cannot travel without her husband’s permission. This leads to interesting paradoxes. Iran has two female ambassadors who have to obtain written permission from their husbands in order to travel. This fact in itself is a clear example to illustrate that women have no rights, and that the little progress they may have achieved is superficial at best.

Women are deprived from working in certain positions. Before the revolution, I was a judge who presided over a court; after the revolution, however, I became an administrative worker – along with 50 other female judges. I became secretary of the same court I had previously been the head of. Obviously, I did not accept the offer. I left the judiciary and opened my own law firm. I chose to became a lawyer and since then, I have been dedicated to the defence of victims of human rights violations.

According to the constitution, women cannot become presidents of the republic – although there is no legal impediment when it comes to ministries. In 41 years, there has been just one female minister: a woman held the position of health minister. Among the 290 members of the previous Parliament, only 17 were women. Elections are not free in Iran and people have no right to vote for whomever they want. Candidates for the Parliament and for the presidency must be approved by a body called the Guardian Council.

For this weekend's parliamentary elections, many candidates were barred the council – a decision that drew public criticism and even protests. A poll conducted last week by a state-run news network found that more than 80 per cent of participants said they were not voting in the elections.

Because of current situation, the existing system of oppression in Iran and – especially because of the legal discrimination they suffer – women participate in all demonstrations against the government. They are even at the forefront of these protests. Women in Iran want a secular and democratic government. They also demand a separation of religion and state, so that politicians do not use people’s religious sentiments and hide behind Islam to justify oppression. Women in Iran know that the dissolution of their rights is not because of Islam but due to a repressive government. We all know that Islam has different interpretations and that the government only accepts its own, rejecting those of open-minded religious experts. Therefore, what is working against women in the country is political oppression, not Islam.

Demonstrators chant while gathering during a vigil for the victims of the Ukraine International Airlines flight that was unintentionally shot down by Iran, in Tehran. Bloomberg

Demonstrators chant while gathering during a vigil for the victims of the Ukraine International Airlines flight that was unintentionally shot down by Iran, in Tehran. Bloomberg

The government finds its toughest enemies among women. Currently, more than 150 notable women feminists are languishing in prison simply because they are demanding equal rights. The number of political prisoners in Iran is high, but the government does not offer accurate numbers, and threatens families with severe consequences if they inform the media. However, according to the information that I have received, there are more than 1,000 political prisoners and prisoners of conscience.

Fortunately, the feminist movement in Iran has not been opposed by men; on the contrary, many men are followers of it. Women are at the forefront of the struggle and men support them in their demand the elimination of all kinds of discrimination.

I know that democracy will be carried by Iranian women and established in Iran. That day is not far away and, until then, we will struggle. We want a free, independent and democratic Iran.