Political Islam in Egypt: Between Openness and Isolation

اThe Muslim Brotherhood’s discourse has gotten over its long-standing dream of restoring the lost paradise, the Caliphate. But what of the Salafists?

The Salafist mind - so to speak - is undoubtedly going through a crisis characterized by religious extremism - based on incorrect religious interpretations - and the baseless prohibition of social behaviors and open liberal values. 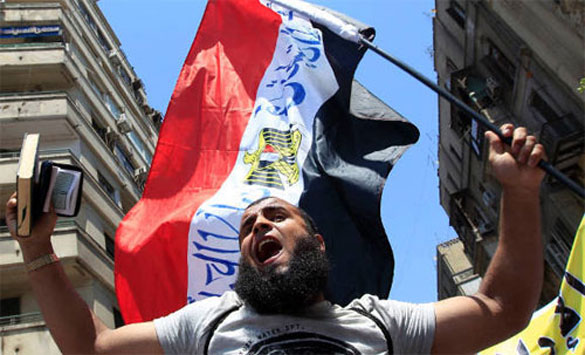 A protester from a Salafist Islamic group shouts Quranic verses as he holds an Egyptian flag with the words, "There is no God but God and Mohammad is his prophet" at Tahrir square in Cairo July 29, 2011. (photo by REUTERS/Amr Dalsh)

This crisis is a part of the general crisis experienced by the traditional religious mind, whether exemplified by the Muslim Brotherhood’s ideas - which are moderate, generally speaking or by the ideas of Islamist militant groups, which employed violence and terrorism as tools to topple the current Arab secular systems, before becoming self-critical.

We have already detailed contemporary Islamic [thought] in all its aspects (refer to our book Universalism, Fundamentalism and Postmodernism, Cairo, 1996, Part I "Critique of Traditional Mind," and Part II, "Crisis of Contemporary Islamic Thought.") By this thought, we mean the Islamic movement that emerged in the entire Arab world more than 80 years ago. And the Muslim Brotherhood, which was established by late Sheikh Hassan al-Banna, is possibly the leader of this movement, given [the Brotherhood’s] diffusion in many Arab countries. This crisis does not only result from the actual behavior of the adherents to these ideas, which have brought them into conflict with the authorities in many Arab countries. Rather, it is a crisis related to the theoretical foundations of these ideas, the way it perceives the world and itself and its attitude towards others. Foremost among these foundations is the quest to establish a religious state which applies Shari'a law and their famous expression "Islam is a religion and a State," to replace the secular system that separates between religion and statehood.

However, it is noteworthy that there have been very important changes in the discourse of political Islam movement, which [at one time] stood opposed to [politcal] parties and democracy and considered them [outside Islam], as opposed to the Shura, the only system they regard as perfect.

This shift has been highlighted by an important memorandum issued by the Muslim Brotherhood in March 1994 under the title "Summary of the Shura and the multiplicity of parties in Islam." This significant memorandum reflected a strong desire to approach the values of political pluralism and focus on the fact that the nation - according to the famous liberal formulation - is the source of power.

This [memorandum was issued] in 1994. And the major historical developments in Egypt - and the January 25 revolution in particular - have led the Muslim Brotherhood to win the parliamentary majority, followed by the Salafist Al-Nour Party.

Thus, the Muslim Brotherhood has been put to the historic test to prove the veracity of its new theory. In fact, the speeches made by both Dr. Mursi, President of the Freedom and Justice Party and Dr. Katatni, Chairman of the People's Assembly, clearly reflect these theories, which defend democracy, respect pluralism and advance consensus among all of the political movements.

The article of Dr. Mohammed Badi, Supreme Leader of the Muslim Brotherhood, published in Al-Ahram on February 13, 2012 under the title "Egypt Swinging between the Past and the Present," includes an extremely important paragraph which caught my attention. [In this paragraph], he says the following: "We seek to build a democratic and modern state based on the foundations and principles of citizenship, the rule of law, liberty, equality, diversity in all its forms and types, the peaceful transfer of power through the ballot box, respect for human rights and fundamental freedoms and common values of freedom, justice and equality among all of the citizens without discrimination on the grounds of race, color or religion. [We want to] draft a new constitution that responds to our desire to realize [a genuine renaissance that lasts] for tens or even hundreds of years, with general consensus; [for] constitutions are based on consensus, not on majorities.”

I have no doubt that all of these ideas reflect - thankfully - a profound shift in the Muslim Brotherhood discourse, which was [at one time] against democracy and in favor of the Shura. [The Brotherhood’s discourse] also used to reject the multiplicity of parties, while clinging to the establishment of a religious state on the grounds that Islam was the religion and the state.

Thus, the Muslim Brotherhood’s discourse has gotten over its long-standing dream of restoring the lost paradise, the Caliphate, as had been expressed by Sheikh Yusuf al-Qaradawi in 1994, when he decided that choosing one Caliph to govern the Islamic nation from the East to the West of the world was what Muslims should seek to achieve. This explains my interview with him in Al-Ahram. In fact, the Caliphate dream disregards the tenets of the global system, and the local reality of many Muslim countries.

In any case, the Muslim Brotherhood's new orientation has taken a giant leap in modernizing its traditional discourse and adapting to democratic considerations.

However, the Salafist problem continues to loom on the horizon. The fact is that despite its expansion in recent years, it has never before been put to the political test within a democratic framework.[The Salafist] al-Nour party, which came in second in the elections, is clearly revealing a narrow minded religious and intellectual system based on a perverse interpretation of Quranic verses.

There is no doubt that Egyptian public opinion was deeply disturbed by the various statements made by some Salafist leaders, whether regarding their desire to establish a system based on “the promotion of virtue and the prevention of vice” - as in Saudi Arabia - or to prohibit [certain social behaviors].

The problem is that Salafists consider the past as the ultimate authority, and they set the stage for [a return to the past]. [They do so] through the reproduction of traditional and radical interpretations of religious texts, [which they apply to] today's society - despite the differences that exist between the Islamic societies of the past and those of the present day.

Salafists have missed the fact that, no matter how much they may wish to, they will not be able to impose their severe ethical mentality on the Egyptian people through the implementation of various prohibitions.

Now that they have emerged from their caves, seeing daylight and becoming engaged in politics through the parliament, [the Salafists] ought to become aware that we are living in the era of democracy and human rights; that Egyptian society has a strong and liberal heritage; and that it will not allow any Salafist faction to impose [its] values on the people.