Earlier this month, Saudi Arabia declared the Muslim Brotherhood a terrorist organisation, in an escalation of the campaign to stamp out the group across the region. Saudi Arabia's decree equates the Brotherhood with groups widely classified as terrorist, such as Al-Qaeda, Hezbollah, and the Islamic State of Iraq and Syria. This is despite the fact that the Brotherhood has long denounced violence. Another controversial inclusion was Hamas, the Palestinian organisation that holds power in Gaza. The ban imposes lengthy prison sentences for even expressing sympathy with the named groups.

The United Arab Emirates (UAE) threw its support behind its neighbour's decision to classify the Brotherhood as a terrorist group. Egypt, where the Muslim Brotherhood was in power until a military coup in July, has been home to a violent crackdown on the group. It was the first to designate it a terrorist organisation, back in December, blaming it for orchestrating a series of attacks by militant groups.

Between Saudi Arabia and the UAE, it is clear that the Gulf countries are ramping up the pressure on the Brotherhood. Elsewhere in the region, the picture is more complicated: if all affiliates or allies of the Brotherhood in the region were implicated by Saudi Arabia's ban, the prime ministers or Turkey, Morocco, and Tunisia would be liable, as well as the recognised opposition parties of Jordan and Bahrain.

It has also been controversial in other countries with large Muslim populations, with scholars expressing concern about the condemnation of a group that promotes Islamic values and carries out valuable social work. As such, the kingdom has sent delegations to discuss the policy with various scholars around the world and convince them of its merits. 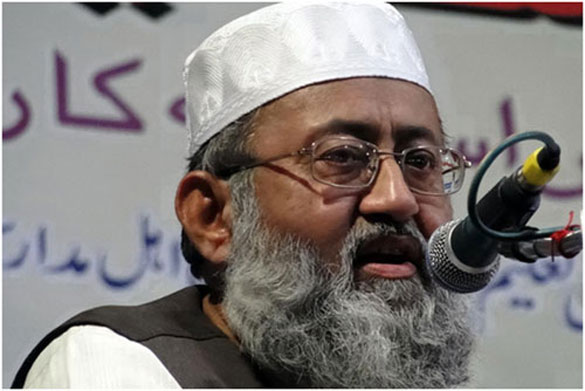 Maulana Salman Nadwi, Dean of the Faculty of Sharia, Nadwatul Ulama in Lucknow

One such visit was due to take place in India on 16 March, to the Nadwatul Ulema in Lucknow, a prominent Islamic institution and seminary. However, the visit was cancelled by the university. The reason, it transpired, was the decision to designate the Muslim Brotherhood and Hamas as terrorist organisations. The Times of India reports that a senior representative of the seminary said that the move was "more cruel than the genocide of hundreds of Muslims in 2002 that was allegedly led by then chief minister of Gujarat, Narendra Modi". Given the fact that anger about this massacre still resonates, this was an exceptionally emotive comparison to draw. On his Facebook page, the Dean of the Faculty of Sharia at the organisation, Maulana Salman Nadwi, also said that the decision to cancel the trip was because of their "religious, community, and reformative responsibility". His statement approvingly described the Brotherhood as an international reformative social organisation and Hamas as a group that fiercely resists Israel.

The decision has drawn largely positive responses from Muslims in the subcontinent, with many taking to social media to express their support. Saudi Arabia, the home of many revered Islamic sites, holds a special status for most Muslims and public protestations against its policies are unusual. However, many are also uncomfortable with the despotism of its government.

The Nadwatul Ulema is not the only Indian organisation to express concern about the decree. Maulana Jalaluddin Umri, head of Jamaat-e-Islami Hind, was quoted by an Indian website as saying: "The movement of Al Ikhwaan ul Muslimoon [Muslim Brotherhood] is based on Islamic principles of tolerance and brotherhood, so banning it would definitely hurt Muslims all world over." A group of Muslim organisations in India released a statement saying that the decision by Saudi was "unjust" and "un-Islamic".

Of course, the Nadwatul Ulema and other Islamic institutes are not representative of the Indian government, which retains strong ties to Saudi Arabia, and formalised a $750 million investment fund earlier this week. The scholars' refusal to meet with representatives of the kingdom is not significant as a marker of India's position, but of concern about the move that is held across the wider Muslim world.

The Saudi decree sprung from increased sectarianism in the Middle East, and anxiety about unrest spilling over its own borders. Outside the immediate region, however, such concerns are immaterial, and international Islamic organisations appear reluctant to be drawn into a polarisation motivated by local political concerns.