So after the grotesquerie of the Taliban and Osama bin Laden and 15 of the 19 suicide killers of 9/11, meet Saudi Arabia’s latest monstrous contribution to world history: the Islamist Sunni caliphate of Iraq and the Levant, conquerors of Mosul and Tikrit – and Raqqa in Syria – and possibly Baghdad, and the ultimate humiliators of Bush and Obama. 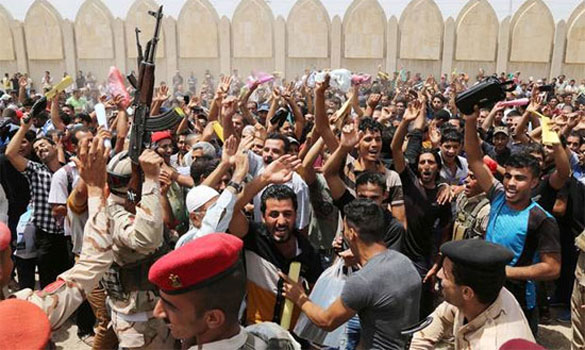 From Aleppo in northern Syria almost to the Iraqi-Iranian border, the jihadists of Isis and sundry other groupuscules paid by the Saudi Wahhabis – and by Kuwaiti oligarchs – now rule thousands of square miles.

Apart from Saudi Arabia’s role in this catastrophe, what other stories are to be hidden from us in the coming days and weeks?

The story of Iraq and the story of Syria are the same – politically, militarily and journalistically: two leaders, one Shia, the other Alawite, fighting for the existence of their regimes against the power of a growing Sunni Muslim international army.

While the Americans support the wretched Prime Minister Nouri al-Maliki and his elected Shia government in Iraq, the same Americans still demand the overthrow of Bashar al-Assad of Syria and his regime, even though both leaders are now brothers-in-arms against the victors of Mosul and Tikrit.

The Croesus-like wealth of Qatar may soon be redirected away from the Muslim rebels of Syria and Iraq to the Assad regime, out of fear and deep hatred for its Sunni brothers in Saudi Arabia (which may invade Qatar if it becomes very angry).

We all know of the “deep concern” of Washington and London at the territorial victories of the Islamists – and the utter destruction of all that America and Britain bled and died for in Iraq. No one, however, will feel as much of this “deep concern” as Shia Iran and Assad of Syria and Maliki of Iraq, who must regard the news from Mosul and Tikrit as a political and military disaster. Just when Syrian military forces were winning the war for Assad, tens of thousands of Iraqi-based militants may now turn on the Damascus government, before or after they choose to advance on Baghdad.

No one will care now how many hundreds of thousands of Iraqis have been slaughtered since 2003 because of the fantasies of Bush and Blair. These two men destroyed Saddam’s regime to make the world safe and declared that Iraq was part of a titanic battle against “Islamofascism.” Well, they lost. Remember that the Americans captured and recaptured Mosul to crush the power of Islamist fighters. They fought for Fallujah twice. And both cities have now been lost again to the Islamists. The armies of Bush and Blair have long gone home, declaring victory.

Under Obama, Saudi Arabia will continue to be treated as a friendly “moderate” in the Arab world, even though its royal family is founded upon the Wahhabist convictions of the Sunni Islamists in Syria and Iraq – and even though millions of its dollars are arming those same fighters. Thus does Saudi power both feed the monster in the deserts of Syria and Iraq and cosy up to the Western powers that protect it.

We should also remember that Maliki’s military attempts to retake Mosul are likely to be ferocious and bloody, just as Assad’s battles to retake cities have proved to be. The refugees fleeing Mosul are more frightened of Shia government revenge than they are of the Sunni jihadists who have captured their city.

We will all be told to regard the new armed “caliphate” as a “terror nation.” Abu Mohamed al-Adnani, the Isis spokesman, is intelligent, warning against arrogance, talking of an advance on Baghdad when he may be thinking of Damascus. Isis is largely leaving the civilians of Mosul unharmed.

Finally, we will be invited to regard the future as a sectarian war when it will be a war between Muslim sectarians and Muslim non-sectarians. The “terror” bit will be provided by the arms we send to all sides.

Robert Fisk is Middle East correspondent for The Independent newspaper.  He is the author of many books on the region, including The Great War for Civilisation: The Conquest of the Middle East.