Ariel Gold, a New Breed of Jewish Activist against Israel 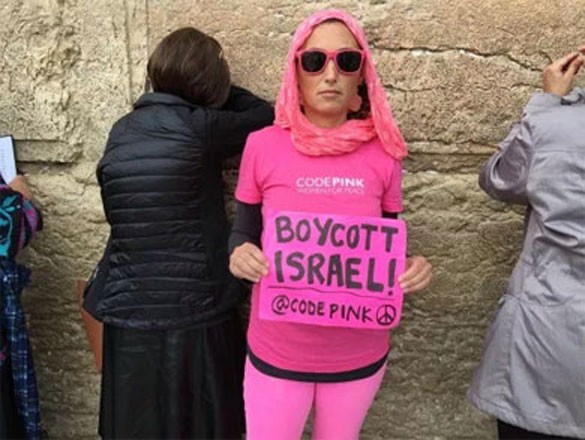 I first heard of Ariel Gold through a Haaretz article that described her in the headline like this:

Jewish Mother and BDS Activist: Code Pink’s Ariel Gold vs. Israel’s Travel Ban: The pro-Palestinian provocateur is under attack after a newspaper alleged that she ‘tricked’ her way into Israel last month. She says she will be ‘heartbroken’ if the authorities ban her from ever returning.

Apparently, she tricked border police by deleting “her anti-Israel Facebook posts, going as far back as 2012”, according to  Israel Hayom, a widely-circulated daily newspaper in Israel that “outed” her.

The Wailing Wall wailed just a little louder on Tuesday, when two Jewish American, Code Pink activists Ariel Gold, of Ithaca, NY and Ariel Vegosen, of Oakland, CA, unfurled a banner at the old Wall that read, “American Jews support BDS.” … Representing the women’s peace organization, Code Pink, the two activists—both named after an angel, a modern Jewish city in Samaria, and a Disney mermaid—proudly expressed their “Jewish opposition to the Israeli occupation of Palestine” and endorsed “the Boycott, Divestment, and Sanctions movement [a link here is provided to an article headlined: Illinois, Latest State to Oppose BDS, Takes Concrete Action against Boycotters] as a nonviolent strategy to bring about a just peace in Palestine and Israel.”

Most recently, she posted a document of an order of protection issued against Cohen by an Israeli court: “Success — Jerusalem court issues order of protection for me against notorious illegal Hebron settler Anat Cohen. She cannot make contact with me in any way, cannot threaten me and cannot harass me.”

The travails of Ariel Gold, an American Jew, in the Jewish state are instructive on many levels.  The attacks against her as a Jew championing Palestinian rights are standard fare, long a part of Israel’s defamation campaign of such Jews in Jewish communities worldwide, but Ariel Gold is a new kind of Jewish critic of Israel.  She is a BDS activist, which means she advocates for all Palestinian rights.  Palestinians today, as Ali Abunimah expressed it, are reclaiming the right to demand all their rights

… their rights in full, an end to Israel’s colonial racism against Palestinian citizens of Israel, an end to occupation, colonization and siege in the West Bank and Gaza Strip, and the right to return.

This was not possible throughout the long decades of the “Peace Process”, when even discussing Palestinian right of return was taboo and the “right” of the Jewish state to “exist” was sacrosanct.

The injunction against Anat Cohen that Ariel Gold posted is startling on many levels, as comments on the post indicate.  Many of the comments on her Facebook post congratulate her and fear for her safety from a woman they describe as a lunatic who, among other things, has been throwing dirty diapers at activists, both international and Palestinian (some of those commenting have had first-hand experience with this!).

Given that Israel’s battalions (as many as seven by last count) are in Hebron for the sole purpose of safeguarding the illegal Jewish presence in the heart of a Palestinian Arab city, a few commenters rightly doubt the efficacy of the document:

Hula Coots: Ariel you are smarter than that, do you really think this piece of paper will stop that leach, or stand up in any court? Let’s be real, this is Israel. That’s why she does it, she knows that no one will stop her, they praise maggots like this.

The most scathing comments, which in the euphoria of Gold’s “victory” over the system were sparse in the thread; have to do with the legal double standard Israel uses in its dealings with Jews and the Palestinian Arabs whose territory it is occupying:

Russell Ward: Isn’t it this a very clear instance of apartheid: you can get this order, very justifiably, but if you were Palestinian suffering the same abuse you couldn’t. Different laws in the same place depending on your race/nationality.

Virginia Sheppard Lapham: But what if you were Palestinian? Would you have even gotten into Court? Be safe!

The fact is, had Ariel Gold been a Palestinian activist, she would have gotten to an Israeli military court in chains, like Issa Amro of Youth Against Settlements, with whom she delivered CODE PINK: Women for Peace petitions to the U.S. State Department, demanding protection for Palestinian human rights defenders in Hebron.

Ariel Gold’s injunction may be “a crack in the justice system” as some of the comments on her post claimed, but it is a crack in the wrong justice system, the one that sells “Jewish and Democratic”.  The people Israel calls “Arabs” and “Jews” (in the same vein as American Western films refer to “cowboys” and “Indians”) are governed by two sets of laws each.  Ariel Gold, as a Jew in the West Bank, tellingly appealed, not to the Palestinian legal system, but to the same legal system that governs Anat Cohen, the Jewish settler.

Although Israel’s Basic Laws protect the rights to equality of groups like women or people with disabilities, it denies the right to equality to Palestinian citizens of the Jewish state through discriminatory laws concerning citizenship.

Furthermore, Israel’s rule of law takes on a catastrophic dimension for Palestinians in the context of  the judicial arm of the occupation, which is described in an academic paper as, “a process of judicial domination that facilitates extensive control of the [Israeli] military authorities over the Palestinian civilian population through their judicial powers.”

Unlike Ariel Gold, many Jews who see themselves generally as liberal or progressive or humanists nevertheless continue to criticize Israel “for its own sake” or for the sake of Judaism, as Rabbi Michael Learner, the editor of the Zionist magazine Tikkun: to heal, repair and transform the world, does in 2014:

All my life I’ve been a champion of Israel, proud of its many accomplishments in science and technology that have benefitted the world, insistent on the continuing need for the Jewish people to have a state that offers protections from anti-Semitism that has reared its head continuously throughout Christian and Islamic societies, and enjoying the pleasures of long swaths of time in which I could study in Jerusalem and celebrate Shabbat in a city that weekly closed down the hustle and bustle of the capitalist marketplace for a full twenty-five hours … [But] Israeli behavior toward Palestinians is destroying Judaism and creating a new kind of hatred of Jews by people who never before had any issue with Jews.

Here, in contrast is British MP George Galloway explaining why Israel is in Palestine to a young Jew from the north of London who kept insisting, like Michael Lehrer above, that “Jews have a right to Palestine because they lost six million people in the Holocaust and suffered throughout history”:

The Jews have suffered racist anti-Semitism down the ages in many, many EU countries, including our own. They were subject to regular discrimination at best and pogroms at most, that’s undoubtedly true. The one place in the entire world the Jews were neither discriminated against nor subject to pogroms was the Muslim world. In fact so much that was the case that when Christianity came back to power in Spain in Andalusia, in the western extent of the Islamic empire, when the Muslims left, the Jews left with them, because they feared the Christian anti-Semitism, which would be unleashed in the wake of the departure of the Islamic civilization in the West, that’s why so many Jews are to be found, even today, and were to be found in profusion before the creation of the state of Israel in countries like Morocco and along the north African coast, because under the protection of the Muslims, the Jews left Europe and went to live in N Africa.

The Palestine that was wiped off the map when Britain granted you somebody else’s country had Jews living side by side with Christians and Muslims for centuries without the slightest taste of discrimination or violence or pogroms. So what happened is that Christian anti-Semitism in Europe, which massacred 6 million Jews in the greatest crime in human history was paid for, not by the Christian countries of Europe that either practiced or turned a blind eye to that anti-Semitism, but was paid by the very people who were completely innocent of that Holocaust, who had never persecuted the Jews, who had never pogrom-ed the Jews, and that seems to me to add insult to the injury suffered by a people whose country was wiped off the map, who were dispersed into exile to make way for a Zionist idea, which was granted to European Jews, because these were the first settlers, granted to European Jews, by Britain, as you have failed to acknowledge that Britain had no right to give away somebody else’s country – one country iven to a second people land that actually belonged to a third people – it seems to me an all round injustice, don’t you think, Alex?

It was long before the Holocaust that Britain stepped in. Britain stepped in in 1917 with the Balfour Declaration made by the Britis Minister Balfour on our behalf to a group of atheistic Zionist Jews; I made the point about atheism because it is not a Biblical claim as if God was an estate agent. The men to whom Israel was promised were atheistic Jews; they were not only not speaking for all Jews, they represented at that time in 1917 a tiny proportion of the world’s Jews, Most of the world’s Jews supported communist or socialist parties, Zionist represented a sliver of Jews at the time and these are the people to whom Britain promised the land belonging to a third people without consulting either the British or the world Jews and least of all consulting the Palestinians.

Ariel Gold is a different breed of Jewish activist for Palestine.  She poses a real threat to the existence of Israel as a Jewish state with all that such a state embodies in Apartheid, racism and injustice to Palestinian Arabs. Her situation highlights the contradictions that the much-bandied about term “Jewish and Democratic” holds.

Here she is, an American Jew in the occupied West Bank, appealing to a court in illegally annexed and occupied Jerusalem to protect her against an illegal Jewish settler in Hebron.

Rima Najjar is a Palestinian whose father’s side of the family comes from the forcibly depopulated village of Lifta on the western outskirts of Jerusalem. She is an activist, researcher and retired professor of English literature, Al-Quds University, occupied West Bank.