Muslims Politicians Burying Their Heads in Political Sands in the West 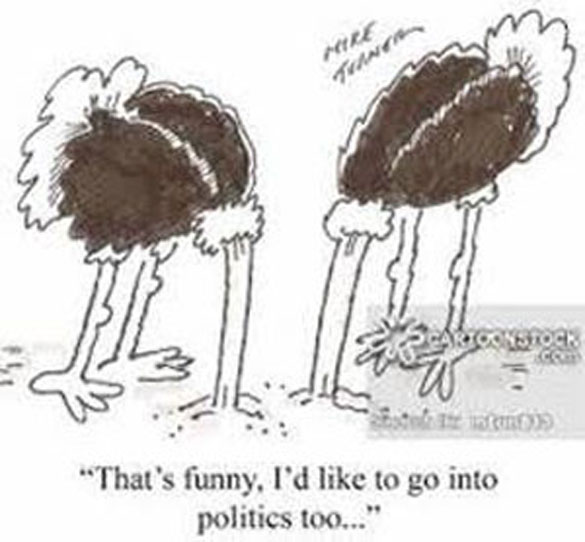 Although it is not known that Ostriches burry their heads in sand when confronted with danger, the expression is quiet commonly used when people tend to ignore to attending matters of importance.

The first Muslim woman elected recently to Australian Federal Parliament said that the recent polls showing ‘about half of respondents would favour a ban on Muslim immigration’ do not reflect the true nature and reality of mainstream Australia!

The coal face reality of mainstream Australia does not reflect the above!

“In 2014 the Scanlon Foundation administered the same questionnaire to both a random sample of the population and an online panel. It found 44 per cent of Australia-born online panel respondents whose parents were born in Australia indicated they held "very negative" or "negative" views toward Muslims”.

It is worth noting that the above Senator is an academic, who would pass off as modern westernised woman anywhere without giving slightest hint of being of one or the other religion. Her comment therefore cannot be taken as typical of mainstream Australians. Similarly statements were made in connection with the poll, which to many well-meaning Australians, and particularly enlightened Muslims, has come as a shock.

In the Western countries, similar to Australia there are majority of Muslim people, both males and females, the likes of the newly elected senator. But there is also a sizeable community of Muslims lately, who stand out like the proverbial sore thumb, advertising their religiosity and separateness and these are the people who are taken as the “representatives” of the Muslim community at large by the majority of citizens, for that is what they observe daily.

The main elements are some of the following but not necessarily in the order of severity to stereotype Muslims, who:-

a)    Present themselves in “confronting” modes of purity dress; particularly the females in full-face cover.

b)    Practice their worship illegally in streets inconveniencing the public.

c)     Do not “integrate” in the society. They live in ghettoes.

d)    Do not respect “Australian values”…and

f)       “Suicide bombers” are Muslims, kill innocent people, of their own kind and foreigners as well.

g)    Muslims carry out Majority of “Terrorist acts” in the World.

h)    Demand “sharia”– religious law- after arriving in a country that regards it as retrogressive, particularly for females. Thus demanding a two tier system of laws.

i)       Muslims practice “polygamy” by stealth in a country where polygamy is illegal.

j)      Muslims are “welfare cheats”, they are burden on the taxpayer.

k)     They insist on “building mosques” where it is inconvenient to the local residents.

To ignore these impressions is to bury ones head in the sand. Although the claim that it is a small minority on both sides that so aggravate the situation in their ignorance; however it is the squeaky wheel that pierces the ears.

Since 9/11 many such polls have been conducted and the percentage of respondents wanting tougher action on immigration has been increasing year by year. To put forward excuses on the basis of technicalities involved in the polling methodology is turning a blind eye to the important issues that the citizens encounter in their daily life, particularly in major cities.

The run of the mill politician and media shock jocks’ claim to fame depend on highlighting these anomalies creeping in the established norms and the “values”, which they also hold important. And one might say quite rightly so as they are representatives of a large section of common people. There is no obligation on them to accept the change in their established culture, brought in by newcomers and considered wrong in the dominant culture of the country.

Not all politicians are as enlightened, considerate and polite as for example the Prime Minister who said “…and we must avoid the temptation to turn on the Muslim community” and then one non-Muslim MP who expressed her disappointment after she read the poll result: “We are not doing good enough job as national leaders to bring harmony and cohesion to our community”. Similarly a MP well known for her xenophobia was chastised by others, non-Muslim and Muslim MPs. But for Muslims and their leaders to assume all politicians and the general public to be equally enlightened and generous is plainly naive.

In Australia everybody is an immigrant (except for the people of the first fleet who thought Australia was Terra nullius!). The obligations well and truly rest with the newcomers who know what the values are of this country, before they came, uninvited at that and have chosen to call the new country ‘home’, and reap the benefits that are not available in their own countries whence they came. If their “religious beliefs and cultural values” are sacrosanct they should have not left their countries; or should have migrated to other places where the environment was favourable.

Not to put too fine a point; the argument that many of them are highly traumatised by the daily tragedies and injustices that are inflicted ‘back home’. It must be realised that it is their own “brethren” there inflicting these traumas in equal measures. It is not an excuse then to inflict disharmony and negativity on the innocent majority of those newcomers who are willing to abide by the laws and norms that are different to theirs.

What is more, the obligation of maintaining peace and harmony is not only Quranic requirement but moral and ethical expectations of humanity! To create Fitnah, tumult and disturbance affects all equally. Not to appreciate that is abrogation of duty.

Such surveys conducted in all countries where Muslims migrate to, have consistently indicated that they are now more and more disliked. The leaders as well as the community of Muslims in general is duty bound to take stock of their ‘obligations’, applicable in their own and in their adopted countries and think of the new generation that is being adversely affected and so is torn between two conflicting cultures.

Recent events show this young generation in its confused state is heading towards growing up into radicalised, dysfunctional sub-set, devoid of any human values and are therefore a danger to humanity as a whole and more so to their own people and families. The recruiting agents then take advantage of that and use them as their front line soldiers to do the dirty job, cheaply and zealously as suicide bombers and pseudo martyrs!

On the other hand, as is shown by the large numbers of descent and law abiding young Muslims of the past, grown up in the West are rendering professional and valued services to the countries they call home, wherein they have diligently and thankfully availed themselves of the facilities that made them useful citizens. They are held in high regard and appreciated. That was the case only a few decades ago but not so much now!

The ‘negative to very negative’ environment is therefore self-made and is most regrettable. The potential to reverse the situation and build a respected community is there but, only if a thorough introspection is done by the Muslim community and its leaders, away from the influences of the false religions and their unqualified operatives, masquerading as the holy and self-anointed leaders.

The honest Afghan cameleers brought in by the British to work in the remote regions of Australia are proud example. They were fortunate though; for they were not accompanied by ‘mullahs’ who never do an honest day’s work. Yet the poor cameleers built tin-shed mosques in remote areas, which are monuments to their Faith!

In appreciation of the contribution those Afghans made to open up this country, the nation has named the trans-continental North to South tourist train as ‘Ghan Train’.

Notwithstanding the external forces affecting Muslim world; the wonderful opportunity of achievement that existed decades ago, here and in the West to create a well-adjusted, enlightened and respected Muslim community with humanitarian values, is fast slipping out of hands, to the detriment not only of the community but the world at large. Muslims should not wait for the next shock poll to show that – ‘it has already happened’!