Redemption for Tablighi Jamaat: Donating Plasma Was in Keeping with What Quran Teaches

By Rasheed Kidwai and Naghma Sahar

Elisabeth Kubler-Ross’s seminal work, Death and Dying, describes the five distinct stages of grief: denial, anger, bargaining, depression and acceptance. While the Swiss-American psychiatrist was speaking about the series of emotions terminally ill patients go through, the first of the five stages that she postulated possibly holds true for a section of India’s people when the country was trying to come to terms with COVID-19 in the initial days of the pandemic. 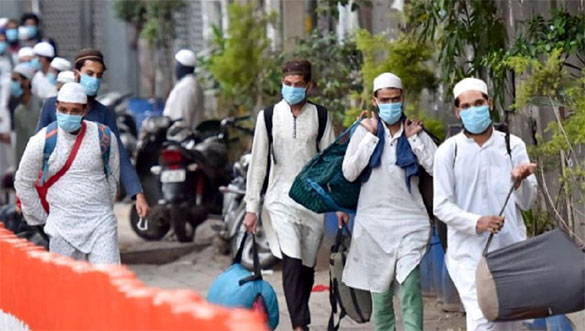 A Delhi court Saturday granted bail to 75 foreign nationals from Thailand and Nepal, who were charge-sheeted for attending a Tablighi Jamaat congregation here allegedly in violation of visa norms, indulging in missionary activities illegally and violating government guidelines issued in the wake of the COVID-19 outbreak.

The spread of the virus in the early months had then exposed the country’s second-largest religious group to a vulnerability born out of denial. Indiscretion and reckless behaviour by members of the Tablighi Jamaat had purportedly led to a spurt in coronavirus-positive cases, not only in Delhi but also in many other parts of the country.

The spread of the virus in the early months had then exposed the country’s second-largest religious group to a vulnerability born out of denial.

An international gathering of Tablighis — preachers or a society to spread the faith —had taken place in New Delhi’s Nizamuddin area in March 2020, drawing hundreds of foreign nationals from Thailand, Nepal, Myanmar, Indonesia, Bangladesh, Malaysia, Sri Lanka and Kyrgyzstan. Despite a government order prohibiting large gatherings, more than 4,500 people had assembled at the Tablighi Jamaat Markaz (headquarters).

Media reports had quoted government sources as saying that since 1 January 2020, over 2,000 foreigners from 70 countries had arrived in India to participate in Jamaat activities. As the Covid-19 lockdown came into force on 25 March 2020, over 1,000 were left stranded in Nizamuddin. 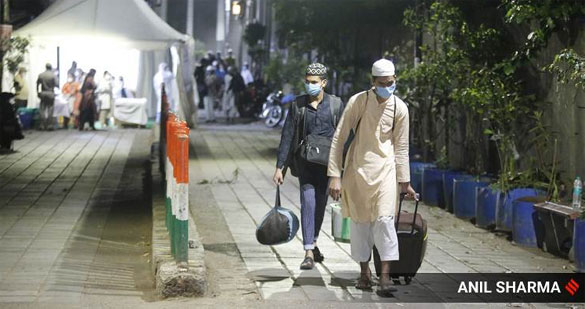 Within days, a state of panic had set in as reports of Covid-19 deaths and positive cases started coming in from various parts of the country. By early April, private television news channels had begun insisting that over 30 per cent of the corona-positive cases had the “Tablighi Virus.”

Political factors were at play too. The country was already in ferment over the Citizenship Amendment Act and the National Register of Citizens.

The Tablighis’ state of alleged ignorance was dubbed a “Himalayan” blunder as a heavy dose of media onslaught, Islamophobia and blame game followed. As NajmulHoda, a Chennai-based IPS officer, lamented on his Facebook wall, Covid-19 looked like a common cold in comparison to the plague of communal hatred. 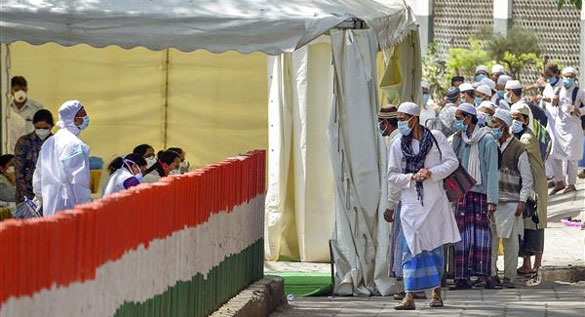 Political factors were at play too. The country was already in ferment over the Citizenship Amendment Act and the National Register of Citizens. Shaheen Bagh and its women protesters were making international headlines and the February 2020 riots in Delhi had deepened the sectarian divide, exacerbating religious tensions. It was in this situation that the Tablighi Jamaat held its congregation. According to data shared by Equality Labs (a digital human rights group) with TIME magazine, the hashtag ‘Corona Jihad’ appeared nearly 300,000 times.

The online attack became more and more vicious as reports of people leaving for different parts of the country from the Markaz poured in. For days, “Tablighi virus” and “Corona Jihad” trended on Twitter. Our entire focus shifted from fighting and containing COVID-19 to fighting the Tablighis and the Muslims, who the general population started equating as one and the same. Those were the initial days of our COVID-stricken lives, unsure of what awaited us and we were quick to blame the Markaz for all our misery.

In the midst of this Islamophobic onslaught, many articles and tweets expressed fears of a Muslim apartheid. The usual practice of portraying Muslims as the other came into play, as did indulging in victimhood.

“Social media, as ever, remained truculent and toxic. Generally speaking, Muslims continue to use social media space to indulge in their victimhood addiction,” observed NajmulHoda.

While the community needed to address the elephant in the room and could not be absolved of its responsibility for wrongful acts by the Tablighis, the polarised discourse that was unleashed in mainstream media impacted the psyche of the general population. Most Muslims came out against the Jamaat, but the entire community was still clubbed together and labelled the “Superspreader”.

But the way the Tablighi Jamaat’s role and, by extension, of the entire Muslim population’s involvement in the spread of the virus was covered by the mainstream media, it suddenly felt that Covid-19 had a religion.

The Tablighis were guilty for sure for the congregation of thousands of people despite the prohibitory orders, and of not reporting cases, but the wave of hatred failed to see that the Tablighi Jamaat is not the sole representative of India’s 170 million Muslims and its actions should not be linked with the larger community. It is also pertinent to note that the Tablighi Jamaat preaches a narrow interpretation of Islam to some sections of Muslim society.

But the way the Tablighi Jamaat’s role and, by extension, of the entire Muslim population’s involvement in the spread of the virus was covered by the mainstream media, it suddenly felt that COVID-19 had a religion.

Soon, stories of discrimination against the poorer sections among Muslims started coming out. NDTV reported how vendors in Mahoba district of Uttar Pradesh were allegedly targeted and stopped from selling vegetables by people who accused them of being members of the Tablighi Jamaat and of spreading the coronavirus.

Old sociological problems, such as overcrowded ghettos, lack of hygiene and low levels of awareness, became handy tools again to stigmatise the community.

The Bharatiya Janata Party (BJP) MLA from Deoria in Uttar Pradesh, Suresh Tiwari, warned people against buying vegetables from Muslims. The defiant leader was later asked to explain his comment by his party chief.

A video shared widely on Facebook and on Twitter purportedly showed Muslims intentionally sneezing on each other. It was later debunked by the fact-checking website AltNews.

The reaction from the community was at times defiant, while some took to social media to counter the hate being peddled with tweets that were either equally toxic or full of self-pity.

A closer look at the role the Muslim clergy played reveals a far more constructive engagement than what has been projected by the mainstream media.

A closer look at the role the Muslim clergy played reveals a far more constructive engagement than what has been projected by the mainstream media. As early as 6 March, Maulana Khalid Rasheed Firangimahli, Lucknow-based Imam, Eidgah, had asked mosque-going Muslims to take preventive measures against Covid-19, and told them to avoid congregations and coughing and sneezing in public.

Firangimahli was among many religious heads across the country who issued fatwas saying that the fight against the coronavirus was a religious obligation.

A broad consensus that was worked out decided against special Eid prayers at Eidgahs and at mosques, etc. Islamic seminaries, such as the Darul Uloom, Nadwa and Deoband, issued fatwas asking the faithful to offer Eid prayers at home.

A major challenge came during the month-long period of Ramadan — that began in the last week of April — in terms of enforcing social distancing and avoiding guests at the breaking of fast (iftar) and at community prayers (tarahwih), etc. But enforcing a sense of discipline among 170 million people sharply divided on sectarian and linguistic lines was done with remarkable ease and voluntary compliance.

As Ramadan is closely followed by Eid, suspension of the customary Eid prayer posed another hurdle. However, a broad consensus that was worked out decided against special Eid prayers at Eidgahs (where special Eid prayers are held) and at mosques, etc. Islamic seminaries, such as the Darul Uloom, Nadwa and Deoband, issued fatwas asking the faithful to offer Eid prayers at home.

The results were so good that Uttar Pradesh Chief Minister Yogi Adityanath called up Firangimahli in Lucknow and congratulated him, saying that Eid prayers throughout the state had been observed without any incident of the virus spreading. The state government also issued a letter of appreciation.

Those members of the Tablighi Jamaat who had tested positive for the virus, and have since been cured, came forward in huge numbers to donate their blood plasma — containing anti-viral antibodies — and helped cure many affected people.

Eid ul-Fitr 2020 saw the largest ever participation of women in family prayers. That prompted Najmul Huda, the IPS officer, to say “thanks” to the virus for bringing gender equality to every Muslim home. “May it get institutionalised. Corona, I can’t really say thank you to you, but it’s thanks to you,” he wrote.

There were other positives too. Charity acted as a great succour as appeals were issued to channelise Ramadan and Eid shopping for the needy. Maulana Naeem Ur Rahman Siddiqui, secretary of the Islamic Centre of India, claims that zakat — or charity — saw a rise of over 50 per cent as compared to the previous year.

Not to forget, the redemption and acknowledgement that came after all those days of hate. If the members of the Tablighi Jamaat were guilty of ignorance in the initial phase of the pandemic, they turned adversity they had wrought upon themselves into opportunity in the form of penance. Those who had tested positive for the virus, and have since been cured, came forward in huge numbers to donate their blood plasma — containing anti-viral antibodies — and helped cure many affected people.

Some say it was in keeping with what the Quran teaches — that divine injunction is not for returning evil with good, but with the best. It says: “Good and evil are not equal. Repel (evil) with what is best, and you will see that the one you had mutual enmity with, will become the closest of friends.” (41:34)