Why Is There Such An Opposition To Interfaith Marriage?

Uttar Pradesh Prohibition of Unlawful Conversion of Religion Ordinance 2020, passed by UP on 27th November 2020, has set the ball rolling. On one hand many other BJP ruled states like MP and Haryana are activating their machinery to bring in similar law in their states and on the other at social level many interfaith couples are being subjected to harassment, some of the Muslim men in particular are being put behind the bars. This law has intentions which are out and out communal as already from 1960s there have been anti-conversion laws. The new laws have goals which are sinister and have the potential of being misused to create social disharmony.

While the ordinance does not use the word love jihad, the foot soldiers of the Hindu nationalist politics are out in the open with apprehending Muslim Man-Hindu girl couple and subjecting them to increasing degrees of torture. In Northern states the phenomenon of intimidation and violence against such couples, the Muslim men in particular is surging. Gradually more couples are being brought into the spiral of moral policing and intimidations. The worst part of the process is that those taking the laws into their hands enjoy impunity and are becoming bolder in creating a divisive atmosphere in the society and pushing back the minority Muslim community into submission and marginalization. At the same time these are putting pressure on Hindu girls and restricting their mobility and freedom.

This time two issues are being rolled into one. The fear of conversions away from Hinduism is being linked to Hindu girls having relationship with Muslim boys. At one level interfaith and inter-caste relationships are natural in an open society, where people from different castes/religion interact at various levels.

Dislike for interfaith marriages was put bluntly by the UP Chief minister Yogi Adityanath, who citing a recent ruling of the Allahabad High Court which said religious conversion for the sake of marriage is unacceptable, warned that those waging “love jihad” should mend their ways or be prepared for their last journey — “Ram Naam Satya Hai Ki Yatra Nikalne Waali Hai”. (The slogan recited in the funeral processions) The instructions have also been passed down that parents should keep a watch on their daughters. 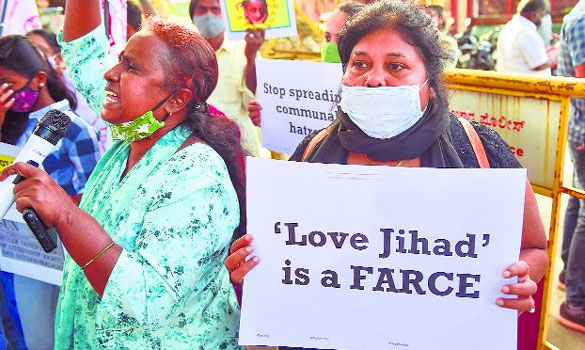 The new law brought in by the UP Government needs to be questioned in the courts as it is an outright attack on different clauses of the Constitution, which gives us the freedom to choose, practice and propagate our faith and other provisions giving us liberty to choose our life partner. This present law (UP and possibly in other states) aims to popularize that Hindu culture is under threat, Hindu girls are vulnerable and Hindu males have to act as their protectors. While the ordinance does not mention the word love jihad, the background and the statements of the top leaders of Hindu nationalism and the actions of vigilantes makes it clear that it is an outright attempt to target the inter faith marriages , especially when the groom is a Muslim. The accusation is that after such marriages the Hindu girl is unable to practice her religion in her marital home and is forced to convert.

Such cases of interfaith marriages are few and far between in this large country of ours’. In more democratized countries interfaith marriages are on the rise, close to becoming social norm. Also Muslim girl and Hindu boy cases are fewer in number, and in the present scenario even the Hindu boy (Ankit Saxena) has to face the wrath of the parents of the girl. The Trinamool Congress MP Nusrat Jahan was also trolled for her choice to marry a Hindu. But overall the hue and cry, the target is the Muslim boy.

In Maharashtra, a group “Hindu Rakshak Samiti” has been claiming to save Hindu religion by breaking up the Hindu-Muslim couples, if the girl happens to be a Hindu. A booklet in Marathi on Love Jihad shows a Muslim boy riding the Motor bike, with Hindu girl riding pillion. In case of a Muslim girl marrying a Hindu and converting is presented as Ghar Wapsi (return home) so is not attacked by Hindu vigilante groups. The police investigation mostly showed that there is no such phenomenon as Love Jihad. The organizational promotion of such marriages is a hoax but has become part of social understanding. 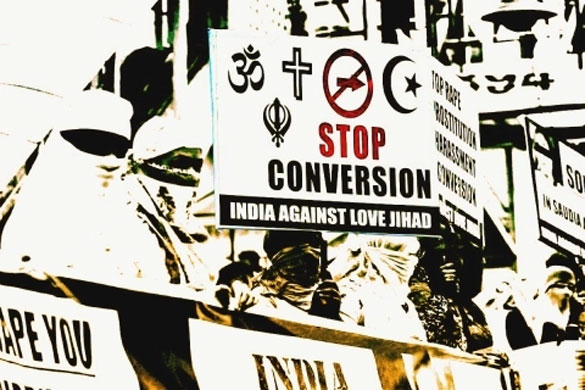 Why are there such and opposition to interfaith marriage? Is it a plan by Muslims to lure Hindu girls, marry and convert them? This is a make believe propaganda. As such it is an attempt to paint the Muslim men doing it deliberately under a plan! What is missed out in the whole scheme of things is that here, in this assertive aggressive propaganda and violence the agency of Hindu girls/women is reduced to zero. Hindu girls are presented as being gullible and without any will or decision making power of their own. While Muslim men are presented as a threat to Hinduism and the Hindu girls are presented as being without any mind of their own. The advice being given to parents to keep a watch on the movements of their daughters and their contacts is a mechanism to control the lives of girls.

All sectarian nationalist ideologies are strongly patriarchal and so the woman has to be under the control of men as ‘their property’. Patriarchal values and nationalism under the wraps of religion go hand in hand. With Independence and implementation of Indian Constitution this journey takes a good leap and we can see the women as their own selves coming to all the spheres of Indian social, educational and political life of the country. This is a matter of discomfiture to those who pay lip service to values of equality and eulogize the ancient holy texts, which give subordinate place to women.

Hope the judiciary is able to restrain the state governments in withdrawing these laws which are oppressive. The interfaith amity needs to be promoted at all the levels.