What Hurts the Most Is the Sneering Ease with Which ‘Jihadist’ And ‘Islamist’ Is Flung at Me, After All, I Am a Muslim

Some years ago, I found myself at a literary festival in a distant land. The host took us for drinks and dinner at a very upscale, very tony bar. There we sat in a cozy circle, some participants from India and the rest from the diaspora, some usual suspects and some relatively unknown writers. A round of introductions took place. One person, who I discovered later was a very important man from Delhi, who had been cordial and ‘normal’ till that point froze me off after hearing my name – just my name – and did not speak one word addressed to me all evening. Were it not for the size of the small group and the general bonhomie brought on by plentiful drinks and good food, the omission would have gone unnoticed. Here it stood out. 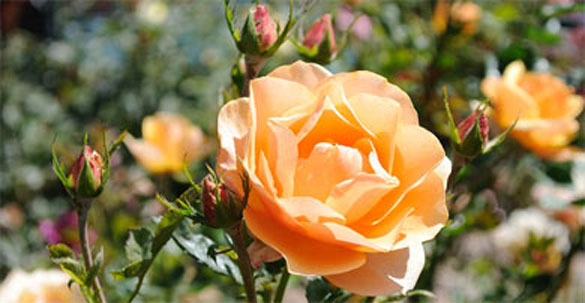 Later, sharing a cab with the host, he addressed me for the very first time in the entire evening only to make a very curt observation – so curt, in fact, that even the host noticed, and remembers it till date.

Growing up in India, this is not the first time I have experienced bias and bigotry but I recall this incident more vividly than others. It should not have hurt so much then, but it did. It should not have rankled but it does. I have often asked myself why this was so. Possibly because I had assumed intolerance, narrow-mindedness and outright, crass bigotry to be largely defined by socio-economic class. Consequently, in the “Us versus Them” paradigm I had, mistakenly and gratuitously, always assumed that I belonged with the “Us”.

It took an incident in a very cosmopolitan setting among what I took to be “people like us”, fellow writers at a literary gathering, to show me that the cocoon of education and the ‘privilege’ that comes with it can only protect me so far, and no further. That one can be defined only by one’s name – because it contains a marker of one’s religious identity – was a new and altogether unpleasant realisation. That we have always been a classist society has been amply evident in ways too numerous and obvious to be recounted; but when religion is added to the mix and socio-economic factors taken away, we are left with something that eats away at the idea of India, or at least the idea of India that existed till not very long ago.

Recent years have demonstrated how fragile and fallacious the link between class and bigotry is in the India that has slowly and steadily been refashioning itself. The prejudice that glimmered when the mask of political correctness slipped from a friend, colleague or neighbour, or when arguments of freedom of speech and the “right to offend” were invoked by an academic or journalist or public intellectual has given way to a militant and muscular majoritarianism.

Protesters hold placards during the “Not in My Name” protest against the lynching of Muslims and Dalits, at Jantar Mantar in New Delhi. Photo: PTI/Shahbaz Khan 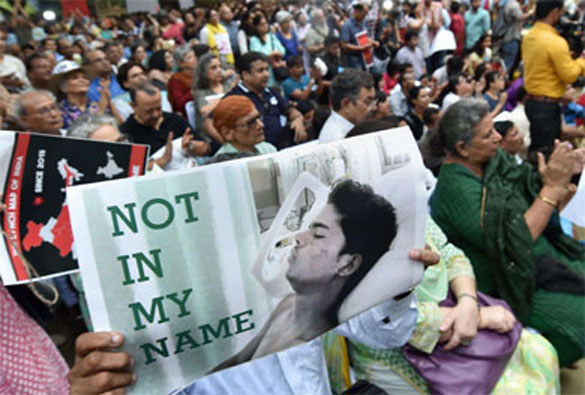 Protesters hold placards during the “Not in My Name” protest against the lynching of Muslims and Dalits, at Jantar Mantar in New Delhi. Photo: PTI/Shahbaz Khan

The Veneer Is Stripped

The veneer of polite society has been stripped and the fig leaf of liberalism discarded; a new sensibility among the middle and upper-middle class is making them unabashed in their display of social hostility towards the “other”. What was once said in a snide whisper or not-so-funny aside is, to use an already over-worked term, the “new normal”.

Over the past few months of lockdown, it is hard to tell which is galloping faster: the coronavirus or Islamophobia? From saffron flags on vegetable carts to the widespread use of expressions such as ‘corona jihad’, from Emirati royalty entering the fray to register their dismay to our own politicians telling us that the virus has no religion, it has been a free fall. Implicit anti-Muslim feelings have given way to explicit hate-mongering. Social boycott has been compounded with economic boycott fostered with fake videos of Muslim vendors deliberately smearing fruits and vegetables with their saliva. As a people, we are split wide open.

The slur ‘Paki’ has always been flung around as has ‘katua’ and ‘mullah’; the stigma of ‘Tablighi’ and ‘jamaati’ has now been added to the Indian vocabulary of hate. Jokes about Muslims being dirty unwashed creatures who take a bath only once a week on Friday have given way to fake, deliberately planted stories about Muslim patients flashing nurses and demanding biryani in quarantine centres. The fake stories grab the front-page headlines and occupy centre-stage in raucous and rancour-filled television shows; the rebuttals and clarifications are always too little, too late—the damage has been done and the WhatsApp industry is in full swing regurgitating misinformation and malice.

Recovering jamaatis who break their fast during Ramzan so they can donate plasma is not considered newsworthy but fake news of jamaatis roaming naked is. A pregnant elephant in Palakkad district of Kerala is deliberately and wilfully placed in a Muslim dominated area and its inadvertent eating of gunpowder-laced pineapple causing it to die a horrible, painful death given a vicious, communal angle.

A prominent academic and a lapsed liberal circulates a signature campaign questioning the Vaishno Devi trust as to why it used its kitchen to serve iftari to Muslims during Ramzan and why does its main gate have signage in Urdu. More empathy is expended in anguished Twitter posts on the pregnant elephant than on a jailed pregnant student. More outrage is expressed for George Floyd than for all the Akhlaqs and Pehlus combined. Black Lives Matter, but Muslim lives don’t. While I personally believe All Lives Matter, some friends (especially those who don’t know me personally but only go by what I post) feel I go looking for a ‘Muslim angle’ to everything.

For every outrage, I am presented with a counter-outrage and accused of whataboutery, of not mustering enough indignation for the what-abouts—in short, of not always wearing my nationalism on my sleeve where it must be visible at all times. Exiting school WhatsApp groups, unfriending once-liberal now blatantly right-wing friends, and blocking trolls is the easy part; harder by far is accepting the lack of empathy and the blindness of majoritarian privilege. But what hurts the most is the sneering ease with which ‘jihadist’ and ‘Islamist’ is flung at me. After all, I am a Muslim.

A rose is a rose is a rose, wrote Gertrude Stein thus implying what’s in a name, things are what they are; after all a rose by any other name would smell just as sweet. But not in New India. A Hindu rose will smell different from a Muslim rose.

Postscript: In the immediate aftermath of the Batla House incident in Delhi in 2008, my friend the writer, Mayank Austen Soofi, conducted a little experiment. He went about his ordinary day, dressed in his usual jeans and tee, with a backpack slung across his shoulder and his favourite Emily Dickinson in his hand, taking the buses and autos and walks in the park that he would on any given day. The ONLY difference was the white skull cap he put on his head. He noted people’s reactions and recorded them in an article for the paper he then wrote for. At the risk of sounding facetious, I suggest the naysayers among you indulge in a similar experiment. At a Barista or a gym or a social occasion where no one knows you and you are called upon to give your name, say you are Salman or Ali, Fatima or Salma and note the reaction. After all, it’s just a name.