Hard As It May Be On the Poor Muslims of Xinjiang, This Ban on Fasting May Not Bring a Break-Up between Pakistan and China

It has been a long-standing love affair and there are numbers to prove it.

According to a Pew Research Centre survey done just last year, the only country that loves China more than China itself, is Pakistan. Now, suddenly, there is news that threatens to fray these bonds of affection. 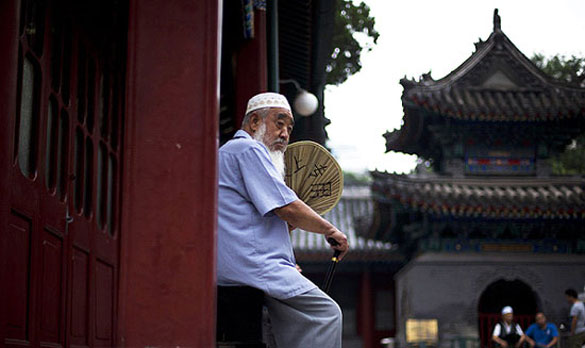 A Chinese Muslim man fans himself as he waits for the time to break his fast. -Photo by AP

According to news reports, the Chinese Communist Party which has long placed restrictions on fasting in the Chinese Muslim province of Xinjiang has issued a ban on fasting. A Government website announced that all teachers, all students, and all civil servants would be banned from fasting in the month of Ramazan.

The ban is a sudden and severe curb on religious freedom in a province already often beleaguered by religious clashes and political unrest.

In one part of the region, retired school teachers were posted outside mosques to prevent students from entering the premises. In another, a school website announced that fasting could not be permitted because it was detrimental to student health.

The Bureau of Forestry in Xinjiang’s Zhaosu County held an event the day before Ramazan began in which party affiliates signed pledges saying that they and their family members would desist from fasting.

A weather bureau in the Hotan area of the province went even further announcing on its website that all Muslim employees would be required to sign a letter saying that they would not be fasting.

China does not have a stellar record of respecting the rights of minority religions. But this new ban and its accompanying restrictions are the most blatant curb on the freedom to practice religion seen in the country in recent days.

At the same time, there is China’s long record of aid and alliance with Pakistan.

Not only has China been a longtime supporter of Pakistan’s nuclear program, it has recently also pledged to help bolster Pakistan’s civilian nuclear power capacity over the next five years. This includes the construction of a 2200MW nuclear power complex in Karachi that is forecasted to cost over 10 billion dollars.

China is also Pakistan’s largest supplier of military equipment and Beijing operates the strategic port of Gwadar in the Balochistan province.

On the civilian end, the two countries enjoy a free trade agreement, an accord signed last year created the “Pak-China Economic Corridor” The project which involved the construction of a 200 km tunnel, would connect Pakistan ironically to the very location of the problem, the Chinese Muslim province of Xinjiang.

As a Muslim country, Pakistan has been eager to stand up to the injustices committed against Muslims anywhere in the world. In most cases, these denunciations, whether they are of veil bans in France or pogroms in Gujarat, oft have not posed much of a challenge to the country’s strategic and economic interests.

This issue with China; its outright banning of what is a basic tenet of the Muslim faith may prove to be a trickier proposition.

Used to denouncing only the West and India, Pakistanis ignore the racism and human rights abuses perpetrated by those they consider to be their 'friends'.

In this respect, the condition of Muslims in Xinjiang requires the solidarity of others who believe in their rights of free exercise and the injustice of this ban.

At the same time, China’s actions against its Muslims are not that different from Pakistan’s indifference toward its own religious minorities.

Pakistani Hindus and Christians, while not facing outright bans, are used to being hounded, harassed and even killed. Viewed from this lens then, the Chinese and Pakistani positions on minorities are perhaps not that far apart; the difference only in the detail of which minority, Muslim, Hindu or Christian, bears the brunt of an intolerant state.

Hard as it may be on the poor Muslims of Xinjiang, this ban on fasting may not bring a break-up between Pakistan and China, becoming instead the wilful compromise on which marriages of convenience are built.