Yahya, Mujib And Bhutto: Prelude to An Order for Genocide 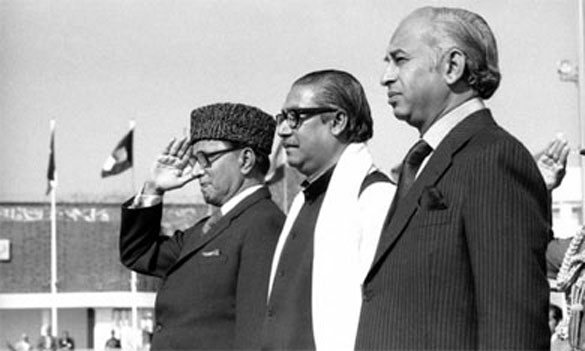 As President Yahya flew out of Dacca on the night of March 25, he took with him the last hopes of a united Pakistan. For the final two days, he had been holed up in the Dacca cantonment with the junta of generals who rule Pakistan, putting the finishing touches to Operation Genocide.

The contingency battle plan had been worked out over the last two years when the army had been given a glimpse of the true force of Bengali nationalism during the movement against Ayub. The strength of the army in this time had been raised from one understrength division to three divisions and an armoured brigade. But the decision to put the plan into action was probably taken some time between March 1 and March 6 and was symbolised by the replacement of Lieutenant General Yakub on March 7 by Lieutenant General Tikka Khan, regarded as the fiercest of the Punjabi hawks.

During this time, they must have gauged the overwhelming support behind Sheikh Mujibur Rahman in Bangla Desh. Sheikh Mujib's call for peaceful non-cooperation, protesting against Yahya's postponement of the Assembly, had, in less than a week, not only destroyed the authority of the Yahya government in the East wing: traditional instruments of Central power in Bangla Desh, such as the civil service and police, had positively pledged allegiance to Mujib.

Yahya's decision to postpone the Assembly was seen as a collective conspiracy with Mr. Bhutto to frustrate the democratic process at the expense of the Bengali majority. The fact that Yahya's close associate, Lieutenant General Umer, was reported by other West Wing leaders to have put pressure on them to join Bhutto's boycott of the Assembly was seen as evidence of this collusion.

Similarly, the decision to postpone the assembly was seen as an attempt to save Bhutto's position when this strategy failed to win support in the West. Many Bengalis at that stage felt that self-rule for Bengal could be attained only outside the framework of one Pakistan.

Confronted with this mood, Mujib staked his political life, first in his public meeting on March 3, then before a million people on March 7, when he deflected the demand for independence towards a negotiated demand for full autonomy. On March 7, the army in Dacca was prepared for unleashing a bloodbath if Mujib declared independence. Heavy machine gun emplacement had been prepared on the cantonment perimeter. Tanks were ready and the air force was alerted.

Denied an open provocation by Mujib, and faced with a complete erosion of Central authority in the East wing, Yahya appeared to opt for compromise in talks with Mujib. He flew to Dacca on March 15 with a clutch of generals, several of whom secreted themselves in the cantonment to finalise their battle plan for March 25.

Troops were being flown in daily in plain clothes on PIA commercial flights, and by March 25 a full division, with support-equipment, had reinforced the existing force. A fleet had been mobilised to send more troops and heavier equipment in case the existing force proved inadequate. A special plain clothes commando unit had been infiltrated into selected urban areas to create trouble as a cover for military action.

The need for this sort of synthetic provocation was becoming more necessary as Yahya saw the extent to which Mujib's Awami League volunteers had established law and order throughout the East Wing. Apart from an ugly communal riot in Chittagong on March 2 and 3, when the army was responsible for law and order, the province had been extraordinary peaceful.

In this background, the Mujib-Yahya talks progressed with surprising ease. At an early stage, Yahya agreed to Mujib's demand for an end to martial law and a transfer of power to civilian rule. Mujib accommodated Yahya by agreeing to let him stay as an interim civilian President at the Centre until the new constitution emerged. He further accepted Yahya's demand for separate session in the National Assembly. This, contrary to Yahya's subsequent posture, was designed to accommodate Mr. Bhutto who feared that in a joint session of the Assembly, Mujib might join hands with the Pathan and Baluch and some of the smaller anti-Bhutto parties in Punjab to neutralise Bhutto and even impose the Six Points on West Pakistan.

Yahya demanded a free hand for Bhutto in the West as a quid pro quo for conceding Mujib's demands. Mujib played into his hands in his desperation to get the army out and in so doing alienated his support in the West wing. When Bizenjo, the Baluch leader, Wali Khan, the Pathan leader, and Daultana, flew back on March 24, they had been sacrificed on the altar of a Bhutto-Mujib entente and should look to their own defences at home.

Once Yahya and Mujib had reached an agreement in principle, and Bhutto's interests had been adequately safeguarded by Yahya, the task of working out the details of the proclamation to transfer power was left to the experts. MM Ahmed, chief economic adviser to Yahya, had been brought in to advise on economics, and had readily conceded that most of the autonomy demands could be accepted even in the interim phase.

Some debate over the basis for transferring power was resolved when the leading constitutional lawyer of Pakistan, AK Brohi, gave an opinion that the Indian Independence Act gave a precedent for transfer of power by presidential proclamation. While some semantic as opposed to substantive, points remained, Yahya's team never indicated that there was a point beyond which they could not accommodate the Awami League.

As a result, there was no question of any breakdown in the talks because Yahya and his team never issued any ultimatum, or their minimum basis for a settlement. Having conceded a free hand to Bhutto in the West and power to Yahya in the Centre at least in the interim phase, it was felt that Yahya could come to terms with the de facto authority exercised by Mujib in the East.

The Awami League team waited for the final drafting session of the proclamation on March 25 but the expected call from Lieutenant General Peerzada never came. Instead, MM Ahmed flew to Karachi without waiting to see the Awami League response to his amendments, indicating the junta had other plans as a substitute for talks.

It is now clear that Yahya was using the talks as a cover for reinforcements to his troops as much as for an opportunity to alienate Mujib from potential support in the West. No one knows what the terms were for transferring power to the civilians, since Yahya's cryptic commitment to the integrity of Pakistan continues to mean all things to all men.

Certainly, Yahya never indicated that the Six Points were inimical to the concept of one Pakistan. Any question of Mujib's modifying his demands never arose with Yahya because no such demand was ever made of him.

It was unfortunate for Yahya that Mujib, in spite of provocation, kept law and order under control while Yahya sat in Dacca. Yahya had to act in cold blood when he left orders with Tikka Khan to launch Operation Genocide.

Yahya must have known that he was destroying the last hope of a united Pakistan. On the night of March 25, Mujib told a West Pakistani visitor that he had done his best to hold Pakistan together but that Yahya was set on a military solution and that this was the end of Pakistan. He felt he might be killed, but that an independent Bangla Desh would be built on his grave.

In this article published in the Guardian, Manchester on June 5, 1971 Prof Rehman Sobhan, who was Professor of Economics at Dacca University and an Adviser to Sheikh Mujibur Rahman, describes the background to the Yahya-Mujib talks

Original Headline: Prelude to an order for genocide