Chetan Bhagat, ever the well-meaning bull in a china shop, wrote this weekend about the Indian Muslim. In his regular Times of India column (in a piece headlined “Letter from an Indian Muslim Youth”), Bhagat appropriates the voice of—he doesn’t specify this, but it is easily surmised from the tone and content of the letter—a young Indian Muslim angry at his exclusion from the mainstream capitalist, neoliberal project. The piece is predictably disappointing in its understanding of the Muslim experience in India but let us put that aside for the moment and discusses first this assumption of voice. 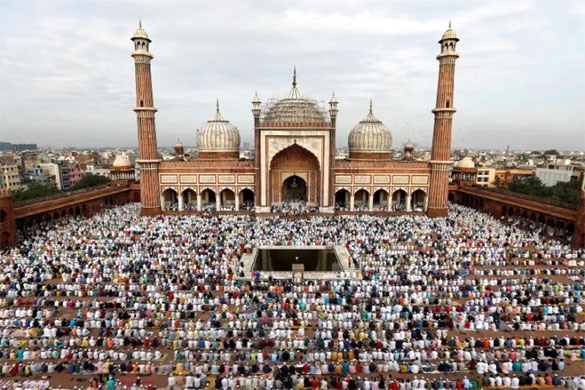 Jama Masjid during Ramzaan. Chetan Bhagat positions himself as a young Indian Muslim angry at his exclusion from the mainstream capitalist, neoliberal project. Photo: Pradeep Gaur/Mint

In India, we are perhaps overly protective of identity groupings. If a debate arises over the actions of a religious or caste group, or over the legacy of a historical figure, fear of giving offence sometimes leads to submission to loud voices instead of the safeguarding of freedom of information and thought. It is precisely this kind of criticism that Bhagat seeks to pre-empt when he writes, with splendid crudity, “I don’t have a name like Ahmed or Saeed or Mirza, anything that will clearly establish me as a Muslim.” Bhagat is saying, I am not a Muslim, so what? But what he is doing is actually pretty sneaky: His disclaimer is in fact a way of positioning himself, to the great majority of his audience, as someone qualified to write on this subject. The understanding he hopes to transmit to his reader through his mea culpa is that he should still be allowed to speak for the entirety of the Muslim population in India.

There are two problems with this. First, while anyone should be encouraged to produce scholarship and analysis about communities or historical figures, Bhagat’s casual ownership of the voice of 150 million people is patently not that. Second: It is precisely because I am an Indian and a Muslim that I would never dare to speak for all of us. I see the great variance in outlook, experience and especially opportunity that exists even within my own family. I compare my own privilege with the rest of Muslim India. I can understand why my views on the publication of The Satanic Verses might differ from a man or woman with a greater love for religious scripture. I cannot claim to speak for the lot of us.

Bhagat does not suffer such inadequacies. He drops, somewhat confusingly, the Indian Muslim voice for a moment to explain that he is an author of fiction, which means he might well be making fabrications—he leaves that to you, dear reader, to decide. This is another artless pretence, as if fiction writers are regularly permitted to write abject nonsense in op-eds—they are not, and certainly should not be allowed to in the future, millions of adoring readers or not.

Bhagat has a canny perceptiveness that sometimes serves him well. He has identified a major problem with the political experience of Indian Muslims, which is the capture of a great deal of the community’s vote by political parties who play the “secular card” without offering much else, especially quantifiable economic and political benefit.

This is a point that has been made numerous times. Where most differ is in the solution to this problem. Bhagat’s solution, though written in the voice of an Indian Muslim, is in fact the standard response of the textbook majoritarian, steeped in its favourite imagery (maulvis make an appearance in the first paragraph, skullcaps in the fourth) and couched in its favoured paternalist idiom.

What Bhagat is doing here is talking not as the Indian Muslim but to the Indian Muslim. His argument is basically a well-tuned representation of the argument Hindu nationalism has with Indian Muslims. As he points out first: “There is no shortage of Muslim achievers. There are Muslim stars in almost every field.” I imagine he means Shah Rukh Khan and Zaheer Khan and A.P.J. Abdul Kalam and others like them. The implication here is that the success of some from the community is indication that any Muslim “with a modern outlook and a desire to come up [sic] in life” should be able to achieve identical success. What seems like a neurotic celebration of Muslim achievement is in fact a stick that is used to beat the rest of the community with: Look what those people have managed to do in India. Why can’t you do the same? Bhagat fails to see, or perhaps understand, the forms religious discrimination can take; there is scant acknowledgment that it even exists in India.

His cloying condescension is hard to take: “We don’t need it as a handout. We are willing to work hard for it.” Again, his implication adheres to that hoary Hindutva chestnut: that the experience of Muslims in India has been of the “secular” state apportioning handouts and freebies that the community has unthinkingly grasped at. Someone should perhaps explain to Bhagat that Muslims have worked as hard as any other community before and since independence; that, as the Sachar Committee Report showed, it is the state that has, in fact, failed to provide service and opportunity for such a substantial number of its people.

What Bhagat will not admit is that this piece is the latest in his sporadic series in support of Gujarat’s chief minister Narendra Modi and the bring-BJP-to-power-2014 effort. His argument is with the “secular” parties, the Congress and regional parties that garner Muslim votes, like the Samajwadi Party or Trinamool Congress. There is merit in this argument, as these parties’ abysmal record with Muslim communities, and their pandering to the most regressive elements within these communities, has proved. But—and this is only my suspicion—I wonder if his desire is the uplift of the long-marginalized Muslim community, or if this piece is a roundabout expression of his vexation with a religious group that he believes might well keep his favoured party and candidate out.

Years ago, I went to Madhya Pradesh to report on the last assembly elections there, a battle between the Congress and the incumbent BJP. I was fresh out of college and very indignant about the nature of minority politics in India. I was sitting, on one of my first days there, in a Muslim neighbourhood in Bhopal, talking to a group of young men. I asked them what the BJP had done for them.

I asked what the Congress had done for them.

I became excited. “Don’t you see,” I said, “why there is no difference between them? Neither of them do anything for you. Why should you think one is better than the other?”

One of the men, a taxi driver, said there was a difference. “It’s a personal thing. You know when the BJP is in power, these gangs, they can come to our Mohalla, they can start a fight, break or burn something. We can’t respond. We go to the police, they won’t file a case. I suppose it’s a question of safety.”

I hadn’t used that exchange in my journalism until I wrote this response today. It was this man’s belief, and visceral as it was, it was unfair to the Shivraj Singh Chouhan government, which had a good record in these matters. But that man opened my eyes about two things. That I, from the elite, had a substantively different experience of my country than any disprivileged Indian, Hindu or Muslim. And that I should never presume to lecture people about the political choices they make. For the poor especially, the vote is their one connection with their political environment, with the factors and decisions that will shape their lives. They do not make that choice without thought.

Prayaag Akbar is the associate editor, The Sunday Guardian