Is Indonesia Really the World’s Most Tolerant Muslim Country?

Indonesia is the most tolerant Muslim-majority in the world, the country’s vice-president Jusuf Kalla recently claimed in a Christmas Day speech in Aceh.

“In the Muslim-majority world, Indonesia is the most harmonious,” Republika Online reported Kalla as saying in his remarks ahead of commemorations for the 10th anniversary of the Indian Ocean tsunami that devastated the country. 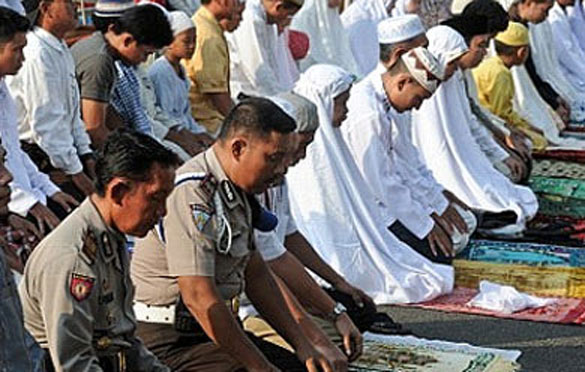 “There’s no [conflict] here that compares with anything in any other country. We live together the most harmoniously,” Kalla said.

While Indonesia has long been recognized as a relatively moderate Muslim country, available data point to a far darker picture of religious tolerance than the sunny one Kalla suggests. To take just one example, according to a cross-national study on religious restrictions published by Pew in September 2012, Indonesia was actually one of the world’s most religiously restrictive states. Specifically, Indonesia was one of only five out of the 49 Muslim-majority countries in the world to register “very high” ratings in both metrics used in the study – government restrictions on religion and social hostilities involving religion. The other four countries were Afghanistan, Egypt, Saudi Arabia and Yemen – hardly good company in this respect.

Even though the findings from that study relied on data collected for four years from 2007 to 2010, it’s not like Indonesia’s record on religious tolerance has been praiseworthy since then. In fact, it has arguably been worsening. Across Indonesia, religious minorities, including Christians and Shia Muslims, have increasingly been harassed, threatened and attacked by Sunni Islamist militant groups like the Islamic Defenders Front. Indonesia’s Setara Institute, which monitors religious freedom in the country, recorded 220 cases of violent attacks on religious minorities in 2013, an increase from 91 such cases in 2007. Too often, the Indonesian government and mainstream Muslim organizations have either failed to adequately respond to these incidents or been complicit in them in some way. “The constitution allows for religious freedom, but some laws and policies restrict it,” the U.S. State Department noted in its last annual report on international religious freedom for Indonesia released in July.

Of course, there is a chance that Indonesia’s record on religious tolerance could improve over the next few years under its new president Joko “Jokowi” Widodo, after deteriorating under his predecessor Susilo Bambang Yudhoyono. For instance, if the Jokowi government follows through on its drafting of a law to promote tolerance and protect all religious groups – including those outside the six recognized religions in Indonesia – that would be a welcome development in this respect.

But some are already warning that religious intolerance could persist and even rise next year, with elections no longer serving as distractions like they did in 2014. The smear campaign launched against Jokowi by his political opponents during the election, including labeling him a Christian of Chinese descent, suggest he could encounter some resistance if he tries to promote greater religious tolerance. And while new laws protecting religious freedom would be welcome, the real challenge, says Haris Azhar, coordinator of the Commission for Missing Persons and Victims of Violence (Kontras), will be enforcing the law.

“The government often forgets that intolerance cannot be addressed by a mere stack of papers consisting of regulations. No matter how many laws you propose, without firm actions from law enforcers, there will still be groups that commit violence on behalf of religion,” Haris said.