When It Comes to The Uyghur Genocide, Muslim Countries Are Conspicuous for Looking the Other Way

We have all seen the videos. A person collapses in the street, a car hits a pedestrian, or someone assaults an innocent passerby. Then to our disbelief, everyone in the vicinity carries on with their day as if nothing had happened. When we are watching the images, we ask how it is possible that people will not intervene or help. 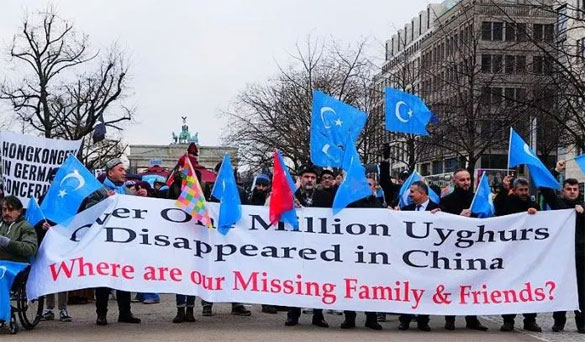 Demonstration for the rights of the Uyghurs in Berlin

The bystander effect has been in full force when it comes to the Chinese state’s repression of the Uyghur people. For the past three years, only a small number of governments have taken any notice at all.

Most countries have been silent until now because of China’s political power, generous loans and investment, and strong-arm diplomacy. Some governments even justify inaction by claiming there is no evidence of harm to Uyghurs, and more than 50 of them praised China’s policies last October.

Despite Beijing’s clumsy attempts at disinformation, mass internments and imprisonments, enforced disappearances, and coerced labor have been abundantly documented by many independent investigations. Journalists and experts from all over the world have analyzed hundreds of Chinese government documents proving a vast scheme of brutality towards Uyghurs.

Researcher Adrian Zenz and the Associated Press recently revealed Chinese government policies designed to reduce the birthrates of Uyghurs through compulsory sterilizations and birth control. The measures aim to reduce the absolute numbers of Uyghurs and accelerate their assimilation into a “Chinese nationality.”

In discussing the implications of his report, Zenz concludes, “These findings provide the strongest evidence yet that Beijing’s policies in Xinjiang meet one of the genocide criteria cited in the U.N. Convention on the Prevention and Punishment of the Crime of Genocide, namely that of Section D of Article II: ‘imposing measures intended to prevent births within the [targeted] group.’”

While Zenz’s findings are shocking, China’s intent towards Uyghurs has been evident for some time. Use of dehumanizing language to refer to Uyghurs comes from the very top. Xi Jinping compared Islam to a virus-like “contagion” and concluded addressing it would require “a period of painful, interventionary treatment.” In case the message was somehow too opaque, he added that the government must “show absolutely no mercy.”

Local authorities have followed Xi’s lead. Kashgar prefecture ordered officials that treatment of Uyghurs should “break their lineage, break their roots, break their connections, and break their origins.”

In social media messages among Uyghurs and in our public testimonies, we have discussed mandatory sterilization, forced abortions, and compulsory birth control for some time. We are relieved these accounts are finally taken seriously. Nevertheless, our frustration at continuing global inaction is apparent.

Many Uyghurs are now asking: where is the tipping point for a response? Now that China’s policies towards Uyghurs may now be considered genocide, there is no excuse for states and multilateral organizations to remain silent.

United Nations and government officials around the world are now on notice: the time is over for raising concerns privately with Chinese officials while conducting business as usual. Without international intervention, the pattern of Chinese government behavior tells us China’s policies will succeed in wiping out the Uyghurs as a people in their own homeland. And those entities with political power who remain bystanders are complicit.

The United Nations has been astonishingly absent from the discussion so far. Last week, however, nearly 50 UN independent experts issued an encouraging and unprecedented statement denouncing China’s human rights record and made an unprecedented call for the creation of a dedicated expert and special session to address China’s abuses.

All governments must respond to these calls, implement their recommendations, and make their own legal determinations on genocide based on the available evidence, given that the UN system itself is often crippled by Chinese influence.

The Interparliamentary Alliance on China, a group made up by parliamentarians from 15 countries, offered further promising signs in a joint statement on June 29 calling for a UN General Assembly resolution to investigate the situation, and for “rapid and decisive political action to be taken” to prevent further abuses.

In the United States, the Uyghur Human Rights Policy Act should only be the first of many similar laws around the world. The law requires visa bans and financial sanctions on Chinese officials responsible for atrocities against Uyghurs. On July 9, the U.S. Treasury Department acted, and imposed travel bans and asset freezes on human rights abusers, including one of the architects of the repression, Xinjiang Party Secretary, Chen Quanguo.

This is the first time Chinese officials are being held to account for violating the fundamental rights of our people. However, these measures must be followed up in the UN and among states at the bilateral level. Muslim-majority countries are conspicuous for looking the other way. Business as usual cannot stop genocide. Governments and the United Nations cannot be bystanders. They must act now.

The views and opinions expressed in this article are those of the author.

Original Headline: When It Comes to the Uyghur Genocide, the World Cannot Be a Bystander