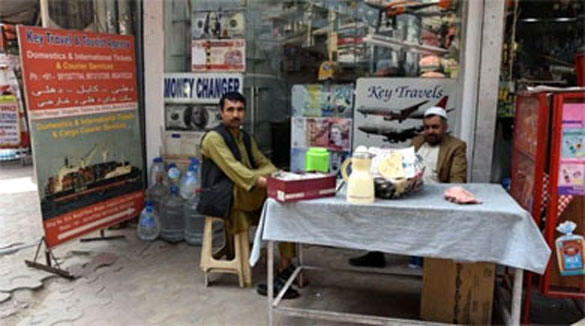 Older denizens of the city talk of the ubiquitous Kabuliwallahs- traders who would bring carpets, dry fruits, and saffron from Afghanistan. (Express Photo by Kajol Rustagi)

Afghans have been present in Delhi as far as living memory goes, and possibly well beyond that. Many of the monuments that Delhiites see on their daily commutes, such as the Qutub Minar (modelled on the Minaret of Jam in the Ghor province of Afghanistan), and Siri fort were built by rulers of Afghan origin.

Older denizens of the city talk of the ubiquitous Kabuliwallahs- traders who would bring carpets, dry fruits, and saffron from Afghanistan.

The Afghan restaurants in Lajpat Nagar are well-loved for their mouth-watering kebabs and pulaos. The CAA relegates Afghans who are part of the fabric of this city to different futures on religious lines, without any regard for the reasons that forced them to leave their country.

Contrary to former Afghan President Hamid Karzai’s claim that “there are no persecuted minorities in Afghanistan… the whole country is persecuted,” the persecution of Hazara people, a Shia ethnic minority, is well documented. Karzai is, of course, right that all Afghans have suffered and so far India has provided refuge, albeit flawed and inadequate, to all Afghans irrespective of ethnicity, gender, religion, and class.

When Afghans started arriving in Delhi in large numbers after the Soviet invasion of Afghanistan in 1979, the GOI was very resistant to the idea of giving them ‘refugee statuses. The United Nations High Commissioner for Refugees (UNHCR) under the aegis of the United Nations Development Programme (UNDP) started issuing refugee certificates to Afghans.

The MHA and MEA discovered this only when an Afghan man, Mohamed Maiwand, sought visa renewal on the ground that he is a ‘UN-recognized refugee’. 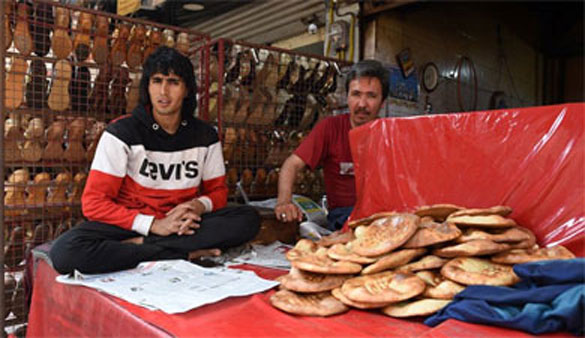 The CAA relegates Afghans who are part of the fabric of this city to different futures on religious lines, without any regard for the reasons that forced them to leave their country. (Express Photo by Kajol Rustagi)

In response to the UNHCR’s repeated appeals from 1980 to 1983 for de jure status in India and permission to open an office (separate from UNDP) to assist Afghans, the MEA took the stand that “there are no Afghan refugees in India”. They insisted that the UNHCR refer to Afghans under their protection as ‘Afghan transients’, rather than ‘refugees’. Although there were reportedly anywhere from 50,000 to 100,000 Afghans in Delhi at the time of the Soviet invasion, the GOI remained intractable on the question of granting refugee status to the 5000 or so Afghans who arrived after 1979.

At the time, MEA officials cited ‘security concerns’ and ‘law and order problems’ as the reason for their opposition to the UNHCR extending assistance to refugees. In internal MEA communications, particularly between the UN and Pak-Iraf (now called IPA) divisions that were most involved with the ‘Afghan question’, officials shared their fears about Pakistani ‘operatives’ entering India in the guise of Afghan refugees. They also speculated that Afghans would start coming in even larger numbers if the UNHCR offered them assistance, especially subsistence allowance (around Rs. 200 per month).

The MHA was directed to ask the Indian embassy in Kabul to clamp down on issuing visas and some Afghans who arrived at Palam airport without visas were deported. However, no drastic steps were taken against Afghans arriving in India or even the UNHCR which continued to assist Afghans despite the government’s lack of cooperation. Almost 40 years later, the UNHCR has established a permanent presence in India and has around 30,000 refugees under its mandate, although it continues to operate on a de facto status. 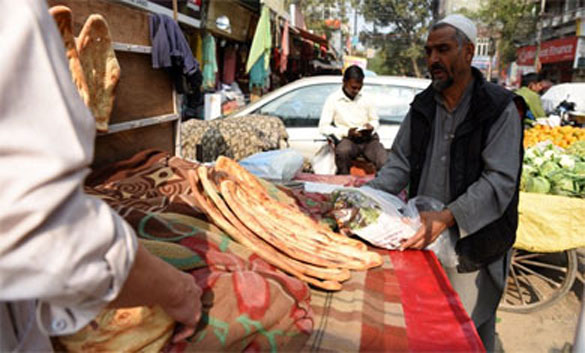 The Afghan restaurants in Lajpat Nagar are well-loved for their mouth-watering kebabs and pulaos. (Express Photo by Kajol Rustagi)

The GOI’s stand on Afghans has to be viewed in relation to India’s close relationship with the Soviet Union at the time. In fact, India’s approach to refugees has always been motivated more by political and diplomatic expediency than humanitarian concern. The CAA does not break with this tradition in any way. According to an Intelligence Bureau report, the CAA will positively impact only about 31,000 refugees from Afghanistan, Pakistan, and Bangladesh who are non-Muslim by making them eligible for naturalisation. The nexus of the CAA and NRC that has been written about widely, establishes that the CAA has very little to do with refugees and only invokes them as pawns in a larger political game.

In treating displaced people differently based on their religion, the CAA diverges from India’s earlier apathetic approach to refugees. One particular incident during the negotiations between the MEA and the UNHCR over the status of Afghans in the 80s illustrates this break.

In a 1981 meeting between R.N. Mulye (Joint Secretary of the UN division of the MEA), Jan Huyser (Resident Representative of the UNDP), and De Souza (a UNHCR official) the question of ‘ethnic Indian among Afghans’ came up — it is fair to assume that ‘ethnic Indians’ here refer to Hindu and Sikh Afghans. Perhaps hoping to get the uncooperative GOI to extend financial support to at least this sub-group among displaced Afghans in Delhi, Huyser and De Souza claimed that unlike most Afghans arriving in India, ‘ethnic Indians’ were not rich and less likely to treat India as a transit location. 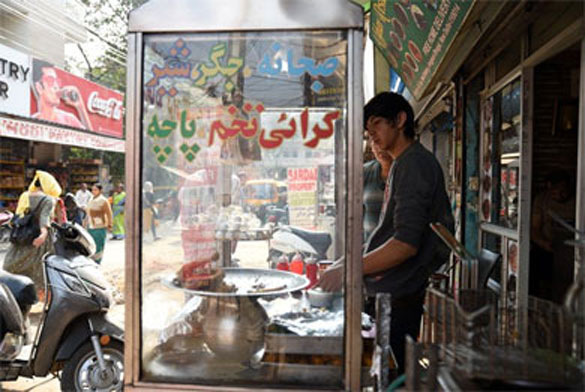 The recent violence against Muslims in Delhi which started as retaliation against anti-CAA protests puts to rest all speculation that the Act is motivated by humanitarianism towards refugees. (Express Photo by Kajol Rustagi)

The implication was that Hindu and Sikh Afghans may stay on in India even after the conflict in Afghanistan ends and the GOI should support them. Writing to his MEA colleagues about this proposal, Mulye argued against giving ‘ethnic Indians’ any special consideration. Even though their number is reported to be less than 1000, Mulye asserts that such special consideration would set a dangerous precedent given the substantial size of Indian diasporas across the world.

He writes, “While the UN may merely look to them in the context of the Afghan situation, we have to look at the situation in the overall context of our policy on ethnic Indians who were non-Indian nationals scattered all over the world”. Thus, the MEA’s approach towards Afghan refugees although unsupportive and apathetic did not discriminate among them based on religion. With the CAA, India has broken with this practice. To be a truly pro-refugee nation, we would not only have to reverse the CAA but pass an asylum bill that will open up a path to legal residence and naturalisation for all those fleeing persecution.

The recent violence against Muslims in Delhi which started as retaliation against anti-CAA protests puts to rest all speculation that the Act is motivated by humanitarianism towards refugees. 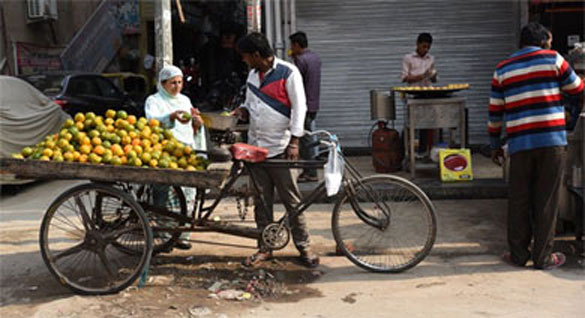 As we call for the right of Indian Muslims to live peacefully in their homes, neighbourhoods, and this country, can we also spare a thought for Afghan refugees who are part of the fabric of Delhi and imagine a similar future for them? (Express Photo by Kajol Rustagi)

The irony of arguing for state recognition of Afghan refugees who are predominantly Muslim, in the context of this violence is not lost on me. But when violence against Muslim citizens of the country go unpunished, what recourse to justice will those completely outside the realm of citizenship have if tomorrow they become the easy targets of mobs?

Further, if the US-Taliban “peace” deal comes to into full effect, it will make return or deportation to Afghanistan a death sentence for many Afghans who sought refuge in India because of the persecution they faced on account of their ethnicity, religious beliefs, gender, sexual orientation and activism at the hands of the Taliban or other elements affiliated with it. As we call for the right of Indian Muslims to live peacefully in their homes, neighbourhoods, and this country, can we also spare a thought for Afghan refugees who are part of the fabric of Delhi and imagine a similar future for them?

Nithya Rajan is a Doctoral student and Instructor at the Department of Gender, Women, and Sexuality Studies, University of Minnesota (USA) and an alumna of Jamia Millia Islamia. Her research is in the fields of Refugee Studies and Feminist Studies and focuses on Afghan refugees in Delhi.

Original Headline:  Afghans in Delhi: Remembering the past, rectifying the future