Will Xinjiang Be Our Orwellian Fate If China Becomes the World’s leading Superpower?

Its cover finally blown by major document leaks in late 2019, the Chinese government no longer denies that it has built a high-tech surveillance state to control the Muslim Uighur population living in the country’s far western region of Xinjiang. 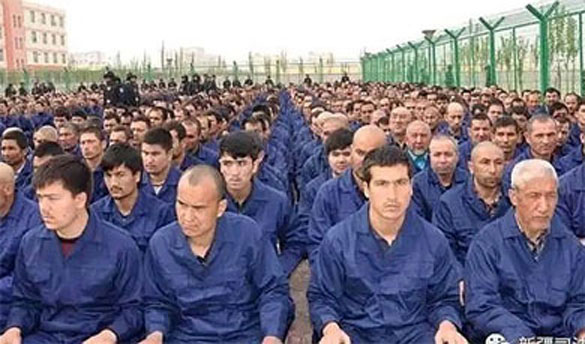 An undated file photo of Uighurs being held at a detention centre in Xinjiang, China. Photo: Twitter

Thanks to the work of a small group of human-rights activists, academics, reporters and the Uighur people themselves; Beijing has shifted strategy to try to justify its draconian “Xinjiang Experiment.” Since 2017, the government has detained more than a million Uighurs and other Muslims in “training” camps, apparently with the goals of sinicizing as well as converting them to communism.

The New York Times and the International Consortium of Investigative Journalists (ICIJ) delivered the coup-de-grace evidence through hundreds of pages detailing how the government of President Xi Jinping conceived, planned, approved and implemented a comprehensive strategy to create the world’s most sophisticated laboratory for mass control.

Beyond the obvious issue of human-rights abuses, the Xinjiang surveillance state raises wider questions for everyone. Is this the future model of governance for dealing with the threats of ethnic conflicts, public safety, disease control, and competition for resources on a densely populated planet? Will this be our collective Orwellian fate if China becomes the world’s leading superpower?

Bethany Allen-Ebrahimian, the lead reporter for the ICIJ’s coverage of the Xinjiang Cables, reflected on some of those bleak sentiments in a podcast interview with SupChina’s Kaiser Kuo and Jeremy Goldkorn on December 5.

“Many countries look to China as a model of governance,” she said, explaining why people in the rest of the world should worry about what goes on in Xinjiang. (@41.25 mins). What happens in Xinjiang won’t stay in Xinjiang, she warned.

The explosive stories most certainly moved the US House of Representatives to vote overwhelmingly – 407-1 – on December 3 to pass the Uighur Human Rights Policy Act of 2019. Among other things, it paves the way for the US government eventually to sanction Chinese officials for human-rights violations in illegally detaining and ‘retraining’ the Uighurs and other minorities to become more Chinese and communist.

On December 19, the European Parliament passed a resolution for targeted sanctions and asset freezes against the Chinese officials responsible for the Xinjiang policy of “severe repression.”

On January 8, the US Congressional-Executive Commission on China (CECC) went a step further by describing the Chinese government’s policy toward the Uighurs as “crimes against humanity.”

The stage is being set for the US and China to add Xinjiang to their growing list of bitter disputes. The stage is also set for the opening of a Pandora’s Box, not just for these two countries, but for the world.

What About US Crimes?

Allen-Ebrahimian and others have expressed the hope that the International Criminal Court (ICC) will eventually be moved to prosecute Chinese officials, including Xi Jinping himself. It might take time, she said, as those seeking justice would have to contend with China’s growing diplomatic and economic might.

But it’s more complicated than that. As the Uighurs’ struggle is increasingly dependent on American support, the push to prosecute China’s “crimes against humanity” could raise potentially troubling questions for the US itself:

Will the focus on China’s abusive policies in Xinjiang draw attention to America’s own record of war crimes, human-rights violations and illegal military actions in other countries? Wikipedia has aggregated a list of alleged US war crimes going back several decades. Already, questions are being asked about both the legality and morality of President Donald Trump’s assassination of Iranian military leader Qasem Soleimani on January 3.

How many alleged US war crimes have been addressed by the ICC?

Does the ICC have the credibility to prosecute Chinese officials given that it has been undermined and threatened by the US?

These questions do not play down the horror show in Xinjiang, nor excuse Beijing’s totalitarian grip on the Uighurs in the implementation of its “war on terror” and Belt and Road Initiative strategy.

But it would be amiss not to compare the scale of the injustices inflicted by the US and Chinese governments on two separate groups of largely innocent people.

Shortly after the NYT and ICIJ published their Xinjiang stories, The Washington Post released its equally sensational “Afghanistan Papers.” Based on more than 2,000 pages of interviews with senior US government officials and others directly involved in the war, the Post documented a long history of US deception and coverup in the buildup and conduct in its ongoing 18-year conflict in Afghanistan.

The Post said it had to wage its own legal battle against the US government for more than three years to secure the release of the documents under the Freedom of Information Act.

The Afghanistan Papers complement the Xinjiang Cables in exposing the duplicity of both the US and China governments in suppressing Muslim populations in the name of fighting the war on terror.

Amid the growing call for action against Beijing with the release of the Xinjiang Cables, how should the international community respond to allegations contained in the Afghanistan Papers?

Now that their cause has captured world attention, the Uighurs face questions about their long-term goals, and how they plan to achieve them.

With regard to their dependence on US support, the Kurds provide an important case study as they have a long history of working with, and for, the West. Like the Uighurs, the Kurds are an ancient people of Islamic faith seeking to establish their own state.

At the behest of the US in the 1980s, the Kurds fought Iraqi dictator Saddam Hussein and suffered huge casualties that included genocide at the hands of Baghdad. Between 2014 and 2017, Kurdish fighters played an important role in helping the allied forces defeat Islamic State (ISIS) in Iraq and Syria.

The estimated 35 million Kurds who live scattered across Turkey, Syria, Iran and Iraq believe that they will eventually be rewarded for their support of the US.

It will be a long wait. Last October, President Trump suddenly withdrew US troops from northern Syria in what had been a safe zone for the Kurds. Within hours, Turkey, which bitterly opposes Kurdish independence, sent troops in to take over the region.

Whatever motivated Trump’s decision, the shock move immediately forced more than 130,000 Kurds to flee as refugees while reviving Islamic State’s fortunes in the region, according to Rolling Stone magazine. Some of the 11,000 ISIS fighters imprisoned by the Kurds broke free during the confusion and are regrouping to resume their reign of terror. The Kurds will be one of their targets in future attacks of revenge.

Yet Trump’s act of betrayal against the Kurds was not the first by the US. According to The Intercept, the US has turned its back on the Kurds eight times since the late 1800s. Writer Jon Schwarz observed, “… the Kurds are a perfect tool for US foreign policy. We can arm the Kurds in whichever of these countries is currently our enemy, whether to make trouble for that country’s government or to accomplish various other objectives.”

Repeatedly, the Kurds have seen their sacrifices wasted and their hopes dashed after being used to fulfill Western strategic objectives constantly to fight the “bad guys.”

With the US and China locked in a long struggle, the Uighurs must consider the risk that they too could end up as dispensable pawns in a chess game among the big powers.

Once an obscure frontier land, Xinjiang has become a conundrum for the world. As a strategic piece on the Europe-Asia landmass, the 1.67-square-kilometer resource-rich region is no longer just a Uighur concern as it is pivotal to President Xi’s US$1 trillion Belt and Road Initiative.

If the Chinese government succeeds in its goal of eradicating or sinicising the Uighur identity, it will not just be their culture or religion that is at risk. Xi Jinping’s Xinjiang represents the most advanced working model for totalitarian rule. It is now conceivable for a single powerful politician, armed with the right technology and draconian regulations, to attempt to subjugate and mould a sizable group of people.

Human-rights groups have raised the alarm, but stopping the Xinjiang Experiment is only a short-term goal that raises long-term questions.

US support for protecting the Uighurs’ human rights and their way of life is crucial at this juncture, but American intentions for Xinjiang are not entirely clear either.

Related to the Kurdish question, will the US support the Uighurs’ demand for an independent state? Is the US looking at Xinjiang as part of its own geopolitical chessboard to check China’s rise, as well as stop Russia’s attempted resurgence?

If the US is not prepared to support Uighur independence, will that encourage the community to seek support from elsewhere? Could this open Xinjiang to the prospect of long-term political instability?

“Why aren’t Muslim-majority countries acting against Beijing’s oppression of the Uighurs in Xinjiang?” has become a popular topic of discussion about China today.

In a tweet on January 15, Human Rights Watch senior researcher Maya Wang demanded this of Indonesia, the country with the world’s largest Muslim population: “When will you speak up for [the] Uighurs?”

It was a follow-up to her Jakarta Post commentary in February 2019, which criticized the Indonesian government’s “lackluster” response to reports about Beijing’s human-rights abuses in Xinjiang.

“Aren’t they ashamed?” the Post said in an editorial denouncing at least a dozen Muslim-majority countries for officially endorsing China’s human-rights record, including its security operations in Xinjiang.

The criticism is misplaced, as it treats Muslim countries as a monolithic bloc with identical foreign-policy interests. It is based on the stereotype that people of the same ethnicity, skin color, or religious affiliation must think and act alike.

Each country is guided by its own interests, and religion is not always a key factor in shaping foreign policies.

An even bigger consideration is that Muslim-majority countries today are probably more wary of the West than they are of Beijing, notwithstanding the fact that Islamophobia is on the rise in China.

Since the turn of the century, the US has launched or supported devastating wars in Iraq, Afghanistan, Syria and Libya, destabilizing large swaths of the Middle East, North Africa and Central Asia in the process. Since taking office in 2017, President Trump has added to the United States’ anti-Islam image by making policies that appear to target Muslims and Muslim-majority countries.

If Muslim-majority states are able to unite against China over Xinjiang, what is to stop them from turning on the West? Indeed, if they somehow found unity of purpose, why not turn against both China and the West?

With no clear scenario in sight, many Muslim-majority countries have chosen to stay out of the Xinjiang issue for now. Like other countries, they too are hedging their positions as the US-China struggle plays out.

When Pandora opened her proverbial box, she let out the curses of war, disease, death and other evils into the world, but inexplicably, retained one item in the box: hope. The Greeks are still debating the consequences if she had freed hope.

The same can be asked of Xinjiang today as gloom descends over the region and its people. For those fighting to shape Xinjiang’s future, what do they hope to achieve? Worse, what if they succeed?