Bengali Speaking Muslims Of Rural Areas Have Been Left Alone By The Government And Muslim Intelligentsia.

1.    Poverty and unemployment among the rural Muslims are very high.

3.    Only 3.6 per cent Muslims in villages have completed secondary education. 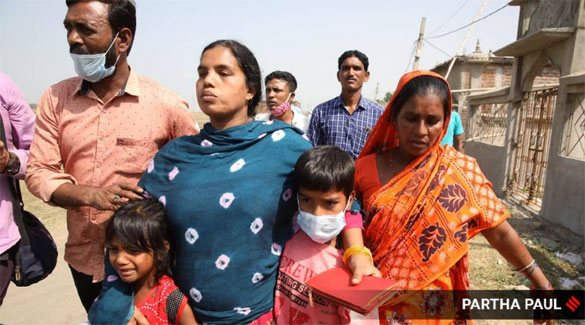 On 21 March 2022, one of the worst cases of massacre and arson took place in a village named Bugtoi, about 250 kilometres from Kolkata in West Bengal. Ten people including a 7 year old girl was burnt alive after the deputy Pradhan Bhadu Sheikh was killed by unknown persons. The family of Mahilal Sheikh were killed in retaliation. One year ago, Bhadu Shaikh 's brother was also killed. The accused in the massacre is Anarul Hussain, who is a TMC leader of the area and wields political clout.

Birbhum district is an economically and industrially backward district in West Begal. Opportunities for employment and livelihood are scant and so the Muslim community is steeped in poverty. Due to poverty, the parents can not support the studies of their children. Many drop out after primary level.

Many of them do not have skills and qualifications to get decent job and so they work as migrant labourers in Kerala, Delhi or Rajasthan. Those who stay back in the village, work as masons or daily wage labourers in the village or in the neighbourhood.

But only business rivalry cannot be the cause of a massacre of this degree. Even if Mahilal Shaikh was behind Bhadu Shaikh's murder, his entire family including his 7 year old daughter were not guilty. This was only because of the illiteracy and the uncivilised way of life of the Muslim community of the village.

Since there was lack of education and employment, a powerful section of Muslims was rich while the majority of the youth spent time in gambling and illegal activities. Many of them were addicted to illicit liquor. Some of them were involved in money lending on interest.

The lack of religious or secular education was not the problem of only the Muslims of Bugtoi. It is the general phenomenon of the rural Muslim community of West Bengal. Due to poverty, the Muslim children can not go for higher studies and are compelled to work as hawkers or labourers. Since, most of the Muslims in Bengal villages are Bengali speaking, they are not aware of Islamic teachings due to unavailability of Islamic books in Bengali. Since, they are not aware of Islamic teachings, they go to any extent when there is a dispute in the family or close relationship.

It is also a fact to be noted that the Muslims in villages are hot headed and inclined towards violence. The Bugtoi village has 65 per cent Hindu population and there is also political and business rivalry among them but they do not fight among themselves or kill one another. They are more educated than the Muslims and know about the repercussions of violence. For Bengalis, violence is the last thing they will resort to but the Muslims in villages are ever ready to resort to violence giving little thought to what the results may be.. During the last days of the Left rule, it was the Bengali Muslims of Medinipur and other districts who had been involved in political violence against the Left Front government and most the of the people killed in the anti-Left violence were rural Muslims.

In short, the Muslim leaders and religious organisations should also be held responsible for what happened in Bugtoi. Political leaders have only exploited them for their political ends and religious leaders have ignored these rural Muslims and spent their resources and energies in spreading sectarian hatred in towns and cities.