Muslims Should Approach All Politicians in Power for Redressal of Grievances, Regardless Of Their Political Affiliation, Say Indian Muslim Scholars 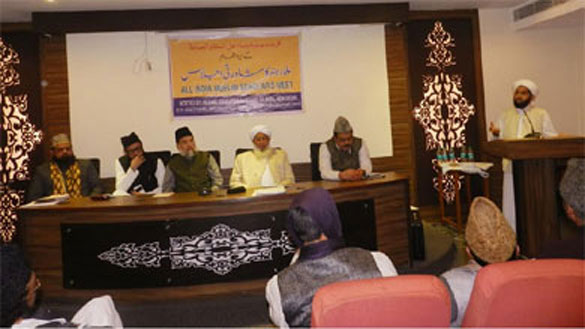 Lamenting the sorry state of Indian Muslim affairs, General Secretary of the All India Muslim Scholars Association Shaikh Abu Bakr said that Muslims should give up blaming the governments for their plight and take it upon themselves to devise effective strategies for a decent life and bright future. He said that governments should always be accorded due respect, whether they are of BJP or any other party.

“We should not have any problem in turning to the BJP government for our issues to be resolved and grievances to be redressed. The Ulema and dignitaries of the Muslim community should meet the Prime Minister of our country with an open mind to put up their concerns, regardless of which party is in power”, he suggested. He further said that “since Mr. Narendra Modi is the current Prime Minister of India, we must honour his prestigious position.”

“We are obliged to show our madrasa curriculums and text books to the concerned people of the government. It’s our duty to come clean and explain things to our authorities”, Sheikh Abu Bakr said.

“Muslims should not worry about the cartoons and drawings, defaming Islam and Prophet Mohammad (pbuh), because the Prophet cannot be depicted for real,” said General Secretary of All India Ulama & Mashaikh Board, Maulana Syed Muhammad Ashraf. He spoke on the reasons why Islam has been conflated in media with extremism. He said: “We have to keep the Muslim youths away from the politically motivated ‘Islamists’ and recognize the real culprits who cause greater defamation of Islam and the Prophet Muhammad (pbuh) than the Islamophobes."

The president of Ittehad-e-Millat Council, Maulana Tauqeer Raza Khan said that Muslims themselves are responsible for the chaos and deterioration in their community. He called for introspection into the causes of Muslim decline with an open mind. “Muslims today are plagued with evils and vices, as heinous as violation of others’ rights, wrongful exploitation of people and usurping others' properties.” He said that Ulema and madrasas will be held accountable for the social decline of the Muslim community, if they do not serve the purposes they are meant for.

These constructive, introspective views came out in a conference organised by All India Muslim Scholars Association (Kul Hind Jamiat Ulema Ahlus Sunnat wal Jama’at). This event was titled “Ulema-e-Hind ka Mushawarati Ijlas” (All India Muslim Scholars’ Meet) at Delhi’s India Islamic Cultural Centre. This Muslim intelligentsia’s meet drew a considerable number of Sufi-oriented Sunni Muslim scholars, Ulema and intellectuals from across the nation, mostly from Kerala, Uttar Pradesh and the capital itself. They brainstormed the ways to come together to work for the all-round development of the Indian Muslim community. Paramount importance was attached to the educational and intellectual awakening of the Muslim students, particularly Madrasa graduates. Both the ulema and scholars deliberated on community, national and international issues as well as the steps being taken to ameliorate the situations of the Indian Muslims. 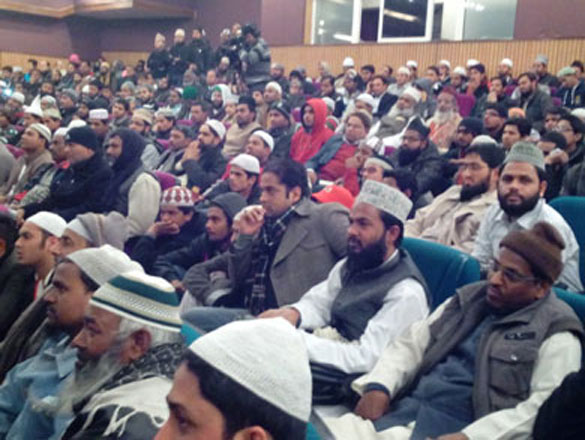 The Jamiat Ulama Ahle Sunnat wa Jama’at is an apex forum of Sunni-Sufi Muslim organisations and institutions of national eminence, primarily concerned with education, social revivalism and human resources development of the Indian Muslims. It was established at a representative meeting of the leading Sunni ulema and intellectuals, most prominently Shaikh Abu Bakr Ahmad founder and chancellor of Markaz Saquafa Sunniyya (Sunni Cultural Centre), Kozhikode (Kerala), Professor Syed Muhammad Ameen Mian Quadri, the custodian (Sajjada Nasheen) of the Khaanqaah-e-Marehra Sharif (a renowned Sufi Shrine in UP) and Mufti Akhtar Raza Khan Azhari, the Grand Mufti (Islamic jurist) of Ahle Sunnah and patron of the Khanqah Rizvia, Bareilly, UP.

Noted South Indian Islamic scholar, educationist and social activist popularly known as Abul Aytam (father of orphans) in the Muslim world, Shaikh Abu Bakr Ahmad is the General Secretary of the All India Muslim Scholars Association at present. He stated the chief objectives of the Scholars’ Meet and called for the implementation of the proposals he put forward before the audience. He said that the All India Muslim Scholars Association (AIMSA) is functioning well in the South Indian Muslim community with an aim to address the new challenges and meet the responsibilities placed upon them. “But given the sorry state of affairs Muslims have created for themselves in other parts of the country, Shaikh continued, we have resolved that the Association will have its units in a number of states, particularly UP, Bihar, West Bengal, Tamil Nadu, Gujarat and Delhi.

Advising Muslims to honour the position of the prime minister and approach the party in power for redressal of their grievances, regardless of the nature of the party, Shaikh Abu Bakr also touched upon the crucial issue of madrasa reform, particularly their curriculums and texts which are being supposed by many to be breeding grounds for religious extremists in Pakistan. He said that it’s about time Ulema come all out to explain the things to the government, if they really want to eradicate misconceptions and propagandas about their madrasas.

On the need for sharing madrasa text books with government agencies and representatives, Sheikh Abu Bakr recalled his own personal experience. He referred to his meetings with former Prime Minister Mr. Atal Bihari Vajpayee and Mr. Narendra Modi, while he was the chief minister of Gujarat. “When the controversy arose about the madrasa curriculums, as they were branded with terror ideology, I personally met Mr. Vajpayee and showed him the text contents of my madrasas, particularly the complete series of the text books “Durus-e-Islam” (lessons on Islam), which are taught in all madrasas affiliated with our central Islamic seminary in Kerala, Markaz Saqafa Sunniya.” He continued: “Mr. Vajpayee not only endorsed these text books but also expressed his gratification about the contents of peace, social integrity, universal brotherhood and religious harmony embedded in our madrasa curriculum.”  “Much in the same way, our Prime Minister, Mr. Modi was also very happy and satisfied with the text books of our madrasas. Until we make things clear to the governments, we may not demand complete satisfaction from them”, he averred.

Dwelling on the combination of modern and religious education, Shaikh Abu Bakr pointed out that “In the absence of a combined modern and Islamic moral education, our younger generations end up in the grip of faithless atheists and selfish modernists and thus they easily fall prey to moral evils. It is pathetic to see our youths go wayward, far from the righteous path of life”.

The director of Markaz Saqafa Sunniya, the central Sunni Islamic seminary based in South India, Dr. A. P. Abdul Hakeem Azhari stressed the need for higher education for the Muslim masses. He said that “socio-cultural and educational empowerment is central to achieve long term objectives and therefore we have launched a huge education project for the Muslim masses across the nation”. “We have successfully established several hundred primary to secondary level educational institutes under the banner of Islamic Board of Education, India (based in Darya Ganj, Delhi) and mosques-cum-education centres in various North Indian states particularly Assam and other North-Eastern regions.”

Detailing the achievements of the Islamic Educational Board of India, Dr. Azhari said: “We already have 22 thousand students in our Jamia Markaz (Islamic seminary), 4 hundred primary and higher secondary schools spreading across 16 districts of the Kerala state and 7 thousand madrasas with 3 lack students from across the nation. In other parts of the country, we have thousands of thousand madrasas, mosques-cum-education centres, orphanages and destitute homes.” “Islamic Educational Board of India, Jamia Markaz Saqafa, Relief and Charitable Foundation of India, North East Sunni Welfare Council, and Sunni Yuvajana Sangham will play a key role in materializing this huge educatinal project”, he said.

The director of Islamic Educational Board of India, Maulana Shahul Hameed said that “right to education is a constitutional prerogative for the Muslims, so they should excel in education.” He spoke about the objectives of the Board at length, which mainly aims at the following:   spreading awareness of Islamic culture and heritage among the younger generations,  inculcating in them the real vision of Islamic faith as laid down by the precepts of Sunni-Sufi Islamic scholars, imbibing the spirit of harmony and tolerance, making them peace-loving citizens adhering to the guidelines of the constitution, enabling them to peacefully coexist with the mixed Indian society, awakening them about the ephemeral nature of the world keeping them away from the undue influence of materialism. Mr. Shahul Hameed concluded that “by the grace of Almighty Allah, we can achieve our aspiration of the educational revival through which we can reinstate the golden era of Islamic education and culture.

In his remarks, Vice Imam of Shahi Masjid Fatah Puri, Maulana Muazzam Ali said that the scholars’ meet is an opportune time to reflect upon the causes of decline and disunity of the Muslim Ummah, which he said is a result of decentralisation and degradation of the ulema.

At the end of the Scholars’ Meet, Maulana Hamdi Raza Barkati, syllabus director of the Islamic Board of Education, presented the resolutions which all the participants approved of. In the resolutions, they strongly expressed concerns over rising communalism in the country and denounced it as a handiwork of extremists, who violate the country’s constitution and laws to further their nefarious ends. They also resolved to exert concerted scholarly efforts to preserve the democratic and secular edifice of the Indian polity. The resolution also appealed to all Indian citizens, particularly the mainstream peace-loving Muslims, to champion the noble cause of communal harmony and social affinity, establishing peace and fostering brotherhood with an aim to fail the evil designs of the extremists and hate-mongers.

The Scholars’ Meet was followed by an international Milad Conference, in which the ambassadors of Turkey, South Africa and UAE participated as chief guests. Several foreign Islamic scholars were also present.

Asking Muslims to not worry about the cartoons and drawings defaming Islam and Prophet Mohammad, General Secretary of All India Ulema & Mashaikh Board, Maulana Syed Muhammad Ashraf spoke on the reasons why Islam has been conflated in media with extremism. He said: “We have to keep the Muslim youths away from the politically motivated ‘Islamists’ and recognize the real culprits who cause greater defamation of Islam and the Prophet Muhammad (pbuh) than the Islamophobes. He said “Muslims should not worry about cartoons as the Prophet (pbuh) cannot be depicted for real”. They should empower themselves to resist the biased propaganda of the Islamophobes and to refute the fabricated notion of the so-called “Islamism”.  Syed Ashraf exhorted the audience to recognize and appreciate the contribution of Sufis to the cultivation of Indian sciences, culture and its glorious past. He also stressed the need for the preservation of historic legacy and Islamic relics.

Addressing the public gathering in the Milad program, Shaikh Abu Bakr stressed the need to shun conflicts and improve relations between different communities, particularly between Hindus and Muslims. He said that Hindus, Muslims, Christians and other communities living in India should work together to promote national unity and development. In his speech, Dr. Abdul Hakim Azhari said that agitation or protest is not a solution to the problems; we need to win over hearts and minds by promoting honest relationships.