Ghazwa-tul-Badr—the 17th Ramazan: Does It Have Any Contemporary Relevance As Urdu Press Claims Every Year?

Classical Islamic historiographers like Ibn Hisaham and Ibn Ishaq report that the Ghazwa-tul-Badr was the first Islamic military expedition which took place on the 17th Ramzan in 624. After eight years, Muslims achieved the victory in the holist city of Mecca during Ramazan. 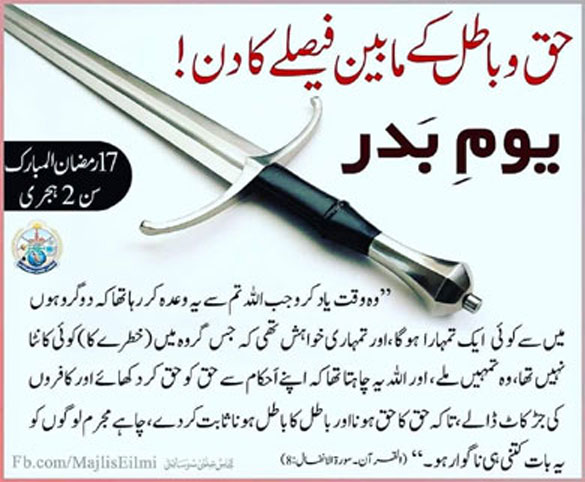 On Ghazwatul Badr, social media campaigns, mostly in Urdu, are underfoot to promote a willful misinterpretation of the Islamic event in the Facebook pages and WhatsApp groups.

But this occasion is marked with a wilful misinterpretation of Islamic history which seeks to launch jihadist attacks during Ramazan in many parts of the world, particularly in Jammu & Kashmir. Today, on the 17th day of Ramazan the first Islamic battle— Ghazwa-tul-Badr also known as Jang-e-Badr in the Indian subcontinent—was orchestrated with the win of the Prophet (pbuh) and his Companions against the pagans of Makkah. But surprisingly, it is treated by the extremist and separatist groups in J&K as a call to arms and not mercy as was ultimately intended in the event.

The All Parties Hurriyat Conference Chairman, Syed Ali Gilani, while felicitating Kashmiri Muslims on the holy occasion of Ramazan, said that the month is not only an exercise for fasting and worship(Ibadat) but also for an overall social wellbeing of society. He further said: “If fasting, Taraawih, charity, Qur’an recitation and other extra [Nafil] Ibadat fails in Ramazan, to hammer our conscious to the realization of Haq (truth) and Batil (falsehood), then this holy month can give us nothing except fifteen hours long pause of hunger. It will fail to enlighten our dark days”.

Worryingly enough, the twisted sermons on the sacredness of Ramazan with a militarized underpinning are conducive to confrontational attitudes, supplemented by the religious ignorance of the separatist Kashmiri leaders of the older generation. They have put such a poisonous seed in the minds of the youth that they continue to live in an adversarial relationship with their own nation and the people. Even the rich syncretic religious traditions of peaceful coexistence in the Kashmir Valley are on the rampage, thanks to the concerted efforts of the Salafist and Jamat-e-Islami networks.

Falsely contrasting the situation of Muslims in India with the oppression meted out to the holy Prophet and his companions in Makkah, Geelani says:

“Pathetic and miserable condition of Muslim Ummah is not only painful but thought provoking as well. Occupied Jammu and Kashmir is also in the ruins and presents a devastated look, disturbing and panicking our new generation. We as a nation are drifting away from our source of Hidayah, which has deprived us from the sense of differentiating between Haq and Batil (right and wrong).

First, the clarification must be made about the oppressive pagans or the Quraish tribe in Makkah. They historically wronged and harshly tortured the Prophet (pbuh) along with his followers, denying them the basic human rights of freedom of life and faith and inflicted great injustice upon them. But the believers in the Prophet (pbuh) persisted and won against all odds. This is where the significance of the 17th day of Ramzan lies, as it also marks the historic and epoch-making conquest of Makkah known as “Fath-e-Makkah” in the Islamic history. This is one of the most sacred days and events of the entire Islamic calendar like the Shab-e-Qadr (Night of Power).

But the twisted interpretation of this historic event was not so popular among Indian Muslims unless it was promulgated in a wave of Islamic messages spread across social media. They began to preach an ‘emulation ‘of the historic victory that the Prophet’s companions achieved in the battle of Badr and thus, they popularized the term ‘Youm-e-Badr’ (the day of Badr) in Jammu & Kashmir.

The event of Badr is actually misconstrued and twisted by the self-styled Islamic ideologues like Geelani with an aim to provoke Muslims to act in vengeance against their supposed enemies. The mainstream Muslims particularly those in Jammu and Kashmir have to remind themselves of the true Islamic ideal of Marhama (mercy) in place of Malhama (retaliation or war). They must recall that having achieved a crowning victory over the oppressive Quraish, a few Companions, overjoyed with the victory, loudly said: “Al-Yum YumulMalhama” (Today is the day of retaliation). But this proclamation was strongly rejected by the Prophet of mercy. He rather said: “La al-YaumYaumulMarhamah” (No, today is the day of compassion).

But tragically, some warmongers in Jammu & Kashmir choose to celebrate the Badr day as an occasion of peddling terror. They particularly engage in south Kashmir to celebrate the ‘anniversary of Ghazwa-e-Badr’ with ghastly terror attacks, as Shakeel Shamsi, a veteran Urdu journalist noted in an editorial in the daily Inquilab. But on the other hand, some semi-literate and gullible Urdu editors like Roznama Sahafat regularly carry sycophantic articles on the ‘contemporary relevance ‘of the Ghazwa-e-Badr. Shockingly, in many Pakistani Urdu newspapers such as Nawa-e-Waqt of Lahore and websites like Daily Urdu Point and the official website of Hizb-ut-Tahrir, the theological justifications for striking terror on the occasion of Ghazwa-e-Badr are routinely put up.

In Kashmir, this peculiar form of jihadist atrocity is not an isolated phenomenon. Historically, the valley witnessed vicious attacks around Ramzan in the 90s as well as in the early 2000s. Former BBC correspondent, Yusuf Jameel, who covered Kashmir’s armed militancy in the nineties, recounted how they stood out as the “bloodiest” in terms of the militant attacks in Kashmir. “The scale of attacks back in the ’90s was much greater. There were a number of incidents during the nineties on a given day. The scale was much larger than this”, he said.

Scores of innocent people bear the brunt of these terror attacks and many government troops and cops are shot dead. This is how the Ghazwa-e-Badr anniversary is marked every year with obnoxious actions and extremist designs not only in Jammu & Kashmir but also in other parts of the world. In fact, the ISIS also celebrated the event of Ghazwa-tul-Badr on every 17th day of Ramzan in its previously occupied territories in Raqqa and Mosul. According to Kurdish news source Rudaw, the ISIS celebrated the 17th Ramzan, while at the same time it discredited other Islamic festivals including the two biggest Islamic occasions—Eid-ul-Fitr and Eid-ul-Adha. ISIS clerics asked the residents of their occupied lands to shun the Eid celebration as it never existed during the Prophetic era.

According to the leading radical Islamist, Abu Mus’ab Zarqawi, the military expeditions of the Islamist fighters on the day of Ghazwa-tul-Badr or 17th Ramzan is attributed with divine intervention. An ISIS spokesman, Abu Muhammad al-Adnani urged his worldwide sympathisers and loyalists to systematically launch attacks during the holy month of Ramzan. He reportedly said: "Ramadan, the month of conquest and jihad. Be prepared to make it a month of calamity everywhere for the non-believers ...”

Further to the point, the ISIS jihadists chose this auspicious month to further their nefarious designs in Orlando (Florida), Istanbul (Turkey) and Dhaka (Bangladesh). From Florida, Istanbul, Dhaka, London, Baghdad, Java, Indonesia, to Manchester and Tehran, most ISIS terror attacks were orchestrated very particularly during the final days of Ramazan.

As we are winding down to the end of Ramazan, a note of caution is seriously required, particularly in the context of Jammu & Kashmir. As the jihadists try to mark it as ‘a month of calamity’, the mainstream Muslims must not forget: When the Sahaba said: “Al-YumuYumulMalhama” (today is the day of retaliation), the Prophet (pbuh) strongly rebutted: “La, Al-YaumuYaumulMarhama” (No, today is the day of mercy).