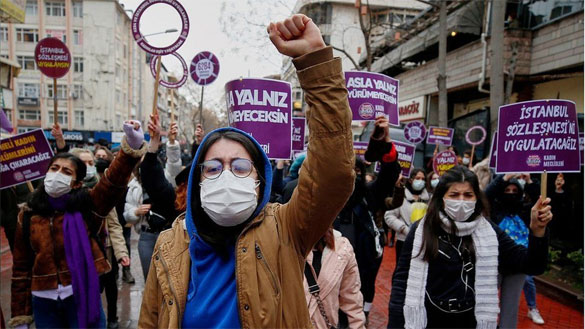 In a move that has delivered a severe blow to the human rights of women in Turkey, Turkish President Recep Tayyip Erdogan announced Turkey's withdrawal from the historic Istanbul Convention on crimes against women through a Presidential decree on 21 March 2021. This has sparked large scale protests by the women of the country who believe that this withdrawal will undermine their fight for gender justice and to prevent crimes against women. Rights activists, lawyers and liberal opposition leaders have condemned Erdogan's move. They said that Erdogan cannot take the country out of an international treaty that was ratified by Parliament. UN experts on Human Rights tweeted that Turkey's withdrawal from Istanbul Convention 'is a pushback against women's rights and a very worrying step backwards'.

The Article 4 of the Treaty says:

"The implementation of the provisions of this Convention by the Parties in particular measure to protect the right of victims shall be secured without discrimination on any ground such as sex, gender, race, colour, language, political or other opinion, national or social origin, associatiin with a national minority, property, birth, sexual orientation, gender identity, marital status, migrant or refugee status or other status."

The Convention had come into effect in 2014 and Erdogan had praised the participation of his country in the Convention by saying that Turkey had taken the lead in the fight for gender equality. But after 7 years, his political compulsions and Islamist ambitions have forced him to change his outlook. Hence Turkey's withdrawal. Erdogan's spokesperson Ferhettin Altun defended Erdogan's decision saying that under the guise of fighting for the rights of women 'a group of people was attempting to normalise homosexuality which was not compatible with Turkey's social and family values.

But is it the only reason for Erdogan's withdrawal from the Convention? A closer look at the provisions of the convention makes it clear that anti-LGBT stand was only a facade behind the real motive of protecting the tribal custom of honour killing, FGM, and forced marriage in the name of protecting family values of Turkey and political agenda of the suppression of Kurdish minority under pressure from the conservative leaders in his own AKP and his allies in the National Movement Party.

Of late there has been pressure from his allies to ban the pro-Kurd political party HDP. On 17 March the Turkish Prosecutor asked the Constitutional Court to ban the HDP and dissolve the party in Parliament. Erdogan had earlier claimed that the HDP was a political front of the banned Kurd militants. That the withdrawal decree came only 4 days later speaks about the main motive behind the withdrawal. The Convention is an obstacle in this way as the Convention asks the signatory countries to protect its minority communities and their social and political rights.

Honour killing is a major social evil plaguing the country. This evil does not have any basis in Islam but is rooted in the tribal cultural mores of the Turkish society. After joining the Istanbul Convention, Turkey had strengthened punishment for honour crimes. This was a severe blow to the patriarchal society of Turkey and there was a constant pressure on the government to ease the punishments for honour crimes. In Turkey, thousands of women are killed every year by their close relatives in the name of honour.

The National Assembly of Turkey had published statistics on crimes against women. According to this official report, 1091 women had been killed for honour between 2000- 2005. In many cases deaths or murders were registered as accidents or suicides.

These statistics showed the severity of crimes against women in Turkey. But instead of trying to launch programmes to bring about social reform and change in the general outlook of the society towards women's issues, Erdogan withdrew from Istanbul Convention to appease the allies.

The UN independent experts and social rapporteurs have urged Erdogan to reconsider its decision and engage in dialogue on tge issue on regional and international level. But the AKP has hinted that instead of staying in the Istanbul Convention, the government will bring about judicial reforms to address crimes against women and will bring an Ankara Declaration for the purpose.

In short, behind his withdrawal from Istanbul Declaration, Erdogan's narrow Islamist ambitions and weakening political base is responsible. To garner support of the conservative political forces he has succumbed to their demands. This will only further jeopardize the women and the minorities in Turkey.