1.    This year, Yaum ul Quds (Quds Day) was held on Twitter, Facebook and other social media networks due to the ravaging pandemic of the Covid-19.

2.    Big rallies, protests and processions are held on the Quds Day particularly in the Arab and Islamic countries with an aim to oppose Israel's occupation of East Jerusalem.

3.    Pakistan’s former Senator Farhatullah Babar has called for renaming the Kashmir Committee of Parliament as the “Kashmir and Palestine Committee”.

4.    Chairman of Hizb ut-Tahrir Britain, urged the Muslim states to ‘step up to their responsibilities and liberate Palestine and Kashmir’.

This year, Yaum ul Quds (Quds Day) was held on Twitter, Facebook and other social media networks due to the ravaging pandemic of the Covid-19. Yaum ul Quds is an annual international Islamic event observed on the last Friday of the holy month of Ramazan to express solidarity with Palestinians. Normally, big rallies, protests and processions are held on the Quds Day particularly in the Arab and Islamic countries with an aim to oppose Israel's occupation of East Jerusalem which is also meant to clash with the Jerusalem Day celebration instituted by Israel in May 1968.

The event was first marked by Imam Khomeini following the Islamic Revolution in Iran as "an annual affirmation of the Ummah's solidarity with the Muslims of Palestine in their struggle for the liberation of Al-Quds. It was basically aimed to achieve these three major objectives: (1) Reminder for the global Muslims to renew their attachment to the third holiest Islamic mosque (Masjid Al-Aqsa), (2) Expression of solidarity with the Palestinian people, and (3) Denouncement of the Israeli occupation of Jerusalem and Masjid Al-Aqsa.

Since the inception of the Quds Day, Muslims the world over have observed the occasion to mark the desecration of the third most sacred Islamic site, as well as to protest against the illegal Israeli occupation of Jerusalem and persecution of the Palestinian people. But in Pakistan, the Quds Day has been traditionally manipulated to serve and further the political ends of the establishment rather than achieve the above-mentioned objectives. Every year, the Quds Day is misused to liken the Israeli-Palestinian conflict to the Kashmir issue—which is an Indo-Pak dispute rather than an issue of the ‘Islamic Ummah’ —in an effort to ‘Islamise’ the Kashmir issue and thus attract sympathies from neutral and otherwise uninterested parties. It is with this ulterior motive that fresh attempts to liken the Kashmir issue with that of Palestine have been made in Pakistan both by the establishment and the radical Islamic organisations. A few incidents are as follows:

Pakistan’s former Senator Farhatullah Babar has called for renaming the Kashmir Committee of Parliament as the “Kashmir and Palestine Committee”. Addressing a seminar in the National Press Club Islamabad organised by Majlis Wahdat ul Muslimeen (MWM) on May 5, Babar said: “Both Kashmir and Palestinian issues are basically human rights issues and should be treated as such. The non-state actors infiltrating from Pakistan into Kashmir did not help the Kashmir cause. Instead it enabled India to question the genuine freedom struggle and label it as cross border terrorism. Unfortunately, the world also accepted Modi’s interpretation and that is why no world leader except Pakistan mentioned Kashmir in their addresses to the UN General Assembly”.

Majlis Wahdat-e-Muslimeen (MWM) of Sindh, Pakistan brought out rallies in Karachi, Hyderabad, Sukkur, Nawabshah and other major cities and towns of Sindh to offer prayers after Jumatul Wida (the last Friday) for the liberation of Palestine and Kashmir. The MWM leader said: “Kashmir is the jugular vein of Pakistan while Palestine is the jugular vein of entire Muslim Ummah”.

Dr Abdul Wahid, chairman of Hizb ut-Tahrir Britain, on this occasion of the International Quds Day urged the Muslim states to ‘step up to their responsibilities and liberate Palestine and Kashmir’. He wrote an article titled, “Only a united Ummah can liberate Palestine and Kashmir” in which he argues why it is important to link the Kashmir issue with the Israeli-Palestinian conflict and then he incites for violence and war using this verse from the Qur’an:

Even in the valley of Kashmir, some radical Islamic clerics and organisations like the Majlis Ulema Imamia JK asked Kashmiri Muslims to commemorate the Quds Day on social media using the hashtag #FromKashmirToPalestine. Maulana Masroor Abbas Ansari, son of renowned Hurriyat leader, Abbas Ansari and currently the chairman of Ittehad ul Muslimeen tweeted, “TWITTER STORM ON 7 TH MAY 10am to 5pm On the last Friday of Ramadan, let’s respond to the voice of Late Imam and create a storm on Social media in support of the oppressed Palestinians on social media. Use Hashtag: #FromKashmirToPalestine.” 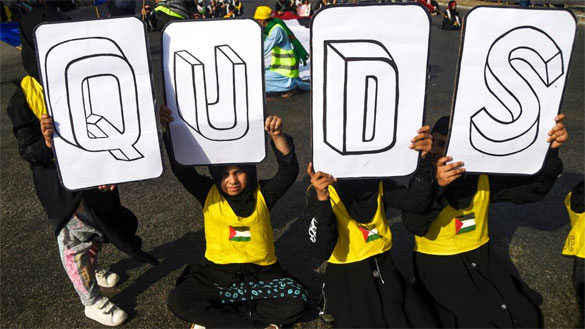 It is no big surprise that due to the sustain attempts by Pakistani propagandists, fuelled by the global jihadist organisations like Hizbut Tahrir and the Muslim Brotherhood, the International Quds Day has been turned into an integral part of campaigns associated with advancing Kashmiri separatism and the rhetoric associated with it. Of course, this trend has gained a palpable traction because some stark historical similarities underlie both conflicts. After all, both conflicts entail post-World War II partitions, ensuing ethnic-religious conflict, competing claims of self-determination, and the debate concerning to what extent can State security be used to suppress terrorism. But what is staggering to note is on such occasions like the Quds Day, the Kashmiri Muslims are portrayed as a monolith community through a systematic propaganda which is far from the truth. Every time there is an International Quds Day or Kashmir Day, there are countless and coordinated mass campaigns through dubious social media accounts, originating from across the border, to show that all Kashmiris are ‘separatist’ and want a merger with Pakistan. Such misguiding campaigns on Kashmir which project Kashmiri Muslims as a monolith have been deviously disregarding the internal dissent and resistance to the regressive aspiration of “Azaadi” by a few secessionists.