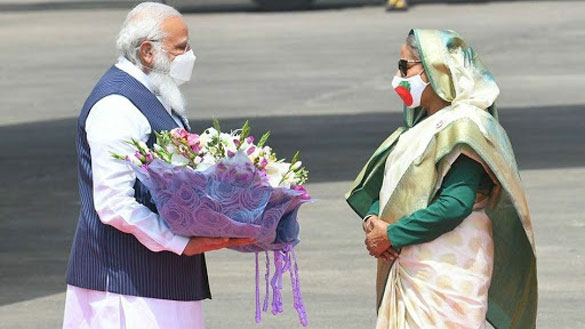 Hardline religious group of Bangladesh, Hefazat-e-Islam with the support of other religious and political organisations on Friday held a protest meeting against the arrival of India's Prime Minister Narendra Modi in Dhaka as part of the Golden Jubilee Celebrations of the freedom of Bangladesh and the centenary celebrations of the birth of the architect of Bangladesh Sheikh Mujibur Rahman. The protests turned violent and the protesters clashed with the police and the volunteers and Student Wing of Awami League. Similar protests were held in Chatgram and Brahmanbadiya. 5 protesters were killed due to firing by the police. Dozens were injured. The police have rounded up dozens of students associated with Hefazat.

Students and youth have also reportedly vandalised a police station and a railway station. 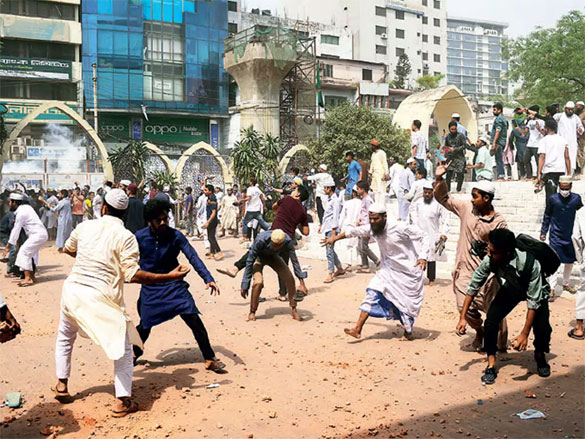 Today, on Saturday, Hefazat held protests in Dhaka to condemn the police attack on protesters and demanded investigation into the killing and punishment to the police personnel found guilty. They also demanded compensation to the kin of the dead.

The Hefazat-e-Islam has announced a strike on Sunday in protest of the police action. Hefazat leader Junaid Babunagari has threatened to launch continuous protests if the government tried to suppress the strike.

The violence and the deaths that followed the protests have turned the celebrations into a crisis. The situation may aggravate further if the government uses force to disturb the strike on Sunday. 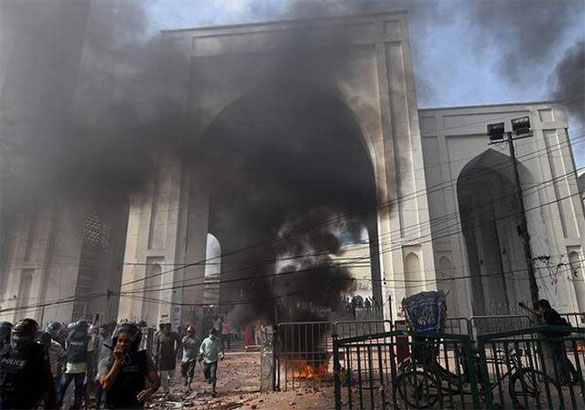 Flashpoint: Members of the Hefazat-e-Islam group clashing with the police in Dhaka on Friday.   | Photo Credit: MUNIR UZ ZAMAN

On Saturday, a number of representatives of religious and cultural organisations participated in the protest meeting at the National Press Club in Dhaka. Mr Zafarullah Choudhury, the founder of Ganaswastha Kendra was the most critical of the Hasina government. Addressing her he said, "You are forcing the people of our country to greet the man-eater, the beast the most communal person Narendra Modi. Hefazat-e-Islam whom you tried to silence by trying to bribe them has come forward in protest against Modi.

General Secretary of the Bangladesh Biplabi Party, said that by creating a curfew like situation, Hasina government has turned the national celebration into only a celebration of Modi and the government.

The Convenor of the Ganasamhati Andolan Junaid Saki said, "Communalism is a curse that divides citizens. We have witnessed this how India is burning due to communalism. Now this is coming to Bangladesh. We are protesting the communal forces like BJP that spreads communalism and hatred in India.

Another speaker Nurul Haque Nur said, "We condemn Sheikh Hasina government's actions. They have accepted the servitude of the Indian imperialism and to appease Narendra Modi whose party BJP attacked mosques and slaughtered Muslims in India, attacked the protesters."

However, the General Secretary of the ruling party Awami League, Obaidul Qadir held BNP responsible for the violence and deaths. He said, "Hefazat indulged in violence on Friday to sabotage the Golden Jubillee Celebrations of Independence with the support of the BNP because the success of the celebrations has caused heartburn to them"

However, going by the mood of the general public, Hefazat-e-Islam which has always tried to exploit religious issues to prove itself the champions of Islam and the Muslims, used the anti-Modi sentiments to create anti-Hasina mood in the country. Last year, it had staged similar protests against French Prime Minister Macron after he had made 'Islam in crisis' remark. Moreover, it had also opposed Hasina government's decision to install statues of Mujibur Rahman in Dhaka and other parts of the country as part of the celebrations.

Still the Hefazat loses no opportunity to put the Hasina government on the back foot.

The invitation of the Hasina

Government to PM Modi to join the Golden Jubilee celebrations provided the Hefazat with another golden opportunity to prove Sheikh Hasina the enemy of Islam and Muslims.

The death of five youth has definitely turned the popular sentiments against Hasina government.

But at the same time the Hefazat also cannot be absolved of the responsibility for the violence and deaths on a diplomatic issue. Hasina government had every right to invite the head of a neighbouring country in the national celebrations. Hefazat may not like the invitee and had the right to protest peacefully and make its opinion known to India and to the Hasina government. According to Islamic principles, a momin has to obey the Ulil Amr, the decisions of the democratically elected government. Indulging in violence leading to deaths comes under the definition of fasad according to the Quran.

PM Modi is in Bangladesh on a two day diplomatic visit. India being a major political and military power in Asia may hold special importance for Bangladesh and so the government of Bangladesh may seek India's co-operation in economic and defence matters. In the past, India has helped Bangladesh in fighting terrorism. Therefore, Hasina government's inviting India's Prime Minister should have been seen from political and diplomatic point of view. By turning it into a national crisis Hefazat is  furthering Pakistan's agenda of destabilising Bangladesh as friendship of Bangladesh with India is not in the interests of Pakistan.