IN 1948, as Israeli forces closed in on his village of Qaryatayn, my grandfather carried my father in his arms to Susiya, about five miles north, in the South Hebron Hills area.

“We will go back home soon,” my grandfather told my father.

They did not. Qaryatayn was destroyed, along with about 400 other Palestinian villages that were razed between 1948 and the mid-1950s. My family rebuilt their lives in Susiya, across the 1949 armistice line in the West Bank.

In 1986, my family was expelled from our home once again — not because of war, but because the occupying Israeli authorities decided to create an archaeological and tourist site around the remains of an ancient synagogue in Susiya. (A structure next to the abandoned temple was used as a mosque from about the 10th century.) This time, it was my father who took me in his arms as the soldiers drew near.

“We will return soon,” he said.

We did not. Without compensation, we were forced to rebuild Susiya nearby on what was left of our agricultural lands. 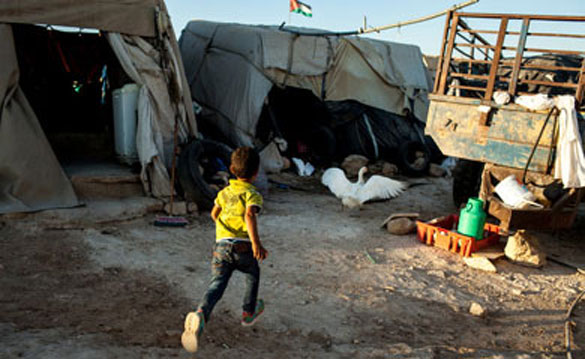 A Palestinian child in the village of Susiya on the West Bank. Credit Rina Castelnuovo for The New York Times

If, in the coming weeks, the Israeli government carries out demolition orders served on some 340 residents of Susiya, I will be forced to take my children in my arms as our home is destroyed and the village razed once again. I do not know if I will have the heart to tell them that we will soon go home; history has taught me that it may be a very long time until we are able to return.

In 2012, the Civil Administration branch of Israel’s Defense Ministry issued demolition orders against more than 50 structures in Susiya, including living quarters, a clinic, shop and solar panels. The reason given in these orders was that our village was built without permits from the Israeli military authorities.

The new Susiya was built on Palestinian villagers’ private agricultural land, but that is no safeguard. In practice, it is virtually impossible for a Palestinian living in what is known as Area C — the 60 percent of the West Bank under both civil and security control of the Israeli military — to receive a building permit. According to Bimkom, an Israeli nonprofit focused on planning rights, more than 98 percent of Palestinian requests for building permits in Area C from 2010 to 2014 were rejected.

The threat has now become immediate. Following the initial distribution of demolition orders, there was a political and legal campaign spearheaded by the residents of Susiya that had support from Palestinian, Israeli and international activists and rights groups. The village was not demolished, our case returned to the courts and the pressure let up.

I feel sorry for our State Dept.'s, John Kirby who is asking Israel to refrain from carrying out the demolition knowing full well his plea...

The story begins with Israel "invading" an innocent Arab village, but the truth was the Israelis were pushing back the invading Jordanian...

This is just a small sample of the brutal and cruel occupation that Palestinians endure. Most people that defend this take up the arguments...

But this past May, a few months after the re-election of Prime Minister Benjamin Netanyahu, the Israeli Supreme Court justice Noam Sohlberg, who himself lives in an Israeli settlement that is considered illegal under international law, caved in to pressure from right-wing and settler organizations and ruled in the High Court that the Israeli military could go ahead with demolitions in the village — despite the fact that the higher-ranking Supreme Court had scheduled a hearing for our case on Aug. 3.

Earlier this month, I learned from lawyers working against the demolition of Susiya that representatives of the Israeli military had stated their intent to demolish parts of our village before the Aug. 3 hearing. Since the May ruling, we in Susiya have been grateful for an outpouring of support and solidarity. Last week, the State Department’s spokesman, John Kirby, made a strong statement on the issue.

“We’re closely following developments in the village of Susiya, in the West Bank,” he said, “and we strongly urge the Israeli authorities to refrain from carrying out any demolitions in the village. Demolition of this Palestinian village or parts of it, and evictions of Palestinians from their homes, would be harmful and provocative.”

That was a step in the right direction, but we need more than mere declarations now. If the Israeli government demolishes all or part of Susiya once again, it will be for no other reason than that we are Palestinians who refused to leave, despite immense pressure and great hardships of daily life under occupation.

The situation in Susiya is only one of many such situations in Area C of the West Bank. Several villages near ours have pending demolition orders as well. If Susiya is destroyed and its residents expelled, it will serve as a precedent for further demolitions and expulsions through the South Hebron Hills and Area C of the West Bank. This must not be allowed to happen.

This story is not a story of Jews against Muslims, or even a story of Israelis against Palestinians. We’re grateful for the many messages of support our village has received from Jewish communities around the world, and the groups and activists working by our side include many Israelis. This is simply a story of justice and equality against dispossession and oppression.

Nasser Nawaja is a community organizer and a field researcher for the Israeli human rights organization B’Tselem.