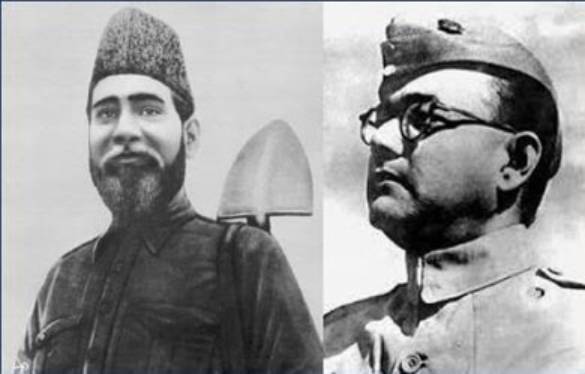 Allama Mashriqi (Sage of the East) and Subhash Chandra Bose (Netaji) were two prominent leaders of the Indian sub-continent (now comprised of India, Pakistan, and Bangladesh). Both were His Majesty’s intransigent opponents and fought against the British Raj in their own ways. However, credit for India’s freedom is being given to Bose (and a few others), whereas Mashriqi’s paramount role in the freedom movement has been either misrepresented or completely wiped out in India (and Pakistan). As a grandson and biographer of Mashriqi, I feel compelled to provide the true facts, which have been kept hidden from public view.

Mashriqi and Bose were both born in British India, Mashriqi in Amritsar (Punjab) and Bose in Cuttack (Bengal). The two men had some similarities. Both wanted India’s freedom from British rule for the sake of saving the nation from political, economic, and cultural slavery. Both men believed that M.K. Gandhi’s methods were ineffective and could not bring freedom; and both adopted militarism in order to overthrow British rule. Gandhi opposed their ideas and supported their arrest. As they were considered a grave threat to British rule, the two men were jailed at different times. During their political careers, Mashriqi and Bose founded parallel/provisional Governments, Mashriqi in India and Bose outside the country. They were warned and harassed to stop their activities, but they brushed aside any pressure and moved forward with their goal of obtaining freedom for India.

Mashriqi and Bose headed prominent political movements dedicated to obtaining freedom for the Indian sub-continent. Mashriqi founded his private army, known as the Khaksar Tehrik (Khaksar Movement) in 1930. The Tehrik welcomed people from all faiths. Through the Tehrik, Mashriqi taught Muslims, Hindus, Sikhs and others how unity and discipline in their ranks could help them overturn foreign rule. Within a short period of time, Mashriqi’s army of Khaksars spread throughout India and the Tehrik also established branches in different parts of the world. Mashriqi and the Khaksars fought relentlessly for freedom of the Indian sub-continent and a large number of Khaksars’ lost their lives (including Mashriqi’s beloved son, Ehsanullah Khan Aslam). During the freedom struggle, Mashriqi and his sons (Anwar, Akram, and Asghar) and thousands of Khaksars were imprisoned (many for life). The rulers did everything to try to crush Mashriqi, his family, and the Khaksars (including torturing and threatening them, spreading false allegations and propaganda labeling them as “fifth columnists,” banning their activities, etc.). However, Mashriqi, his family, and the Khaksars remained relentlessly determined, mobilizing the public via fiery speeches, pamphlets, demonstrations, road marches, and mock wars. They continued their rigorous efforts until British rule came to an end in 1947. 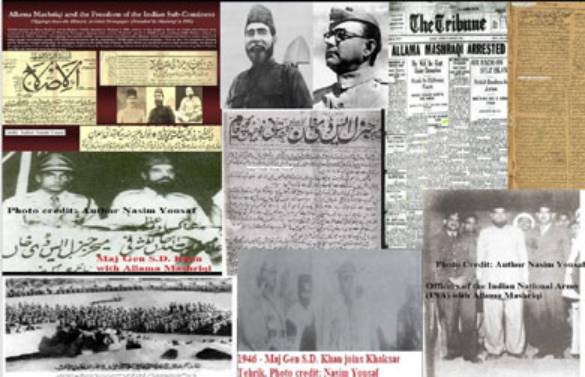 Meanwhile, Bose became the head of the Indian National Army (also known as INA or Azad Hind Fauj) on July 05, 1943 with the help of the Japanese (who were part of the Axis powers). Like the Khaksar Tehrik, the INA was also comprised of Indians from different faiths. The INA focused its efforts on liberating India and fought British forces from outside India. In 1945, Bose’s forces were defeated by the British and the INA surrendered. Thereafter, the INA was disintegrated, and many of the INA’s soldiers were put on trial for treason, murder, and torture. Bose fled soon after his defeat and subsequently died in a plane crash (the circumstances surrounding his death have been questioned by some conspiracy theorists, even though there is no solid proof that he survived).

Bose and the INA’s role ended prior to independence, yet certain quarters in India claim that Bose brought freedom to the region, while ignoring Mashriqi’s efforts. To prove their point, they provide various questionable arguments. For example, apparently the late Prime Minister Clement Attlee mentioned in 1956 to then acting Governor of West Bengal Justice PB Chakraborthy that the British had abandoned their rule in India because of Bose’s INA. This seems to be based purely on hearsay, as there is not a single authentic historic British document or public statement by the Prime Minister or any other British high official that indicates that Attlee made this statement. Also, why would the British declare the INA victorious when the INA had been defeated by the Britons (who were part of the Allied forces)? If anything, it seems more plausible that Attlee confused INA soldiers with Khaksars – as the uniformed Khaksars were the ones fighting inside of India and after the INA’s surrender in 1945, many INA soldiers (e.g. Major General S.D. Khan and Col Ihsan Qadir) had joined the Khaksar Tehrik. In fact, by March of 1945, the “INA strength…was estimated to have declined to about 35,000” (source: cia.gov), whereas the Khaksar strength in 1946 was over five million Khaksar soldiers (Al-Islah, December 01, 1946). Some also claim that the mutiny of the Royal Indian Navy in 1946 was inspired by the INA. This claim may have some validity, but again lacks evidence and is based on questionable assumptions.

In the case of Mashriqi, there are many historic documents and events that show how he created grave fear in the British rulers’ minds and ultimately brought about an end to British rule. Throughout the 1930’s and ‘40’s, Mashriqi and the Khaksars worked tirelessly to mobilize the masses and undermine British rule. To cite just a few examples, upon Mashriqi’s directive, 3,000 Khaksar soldiers (who were in the Armed Forces of British India) brought about a mutiny in the armed forces. This was reported in Al-Islah on March 08, 1946. And in the time period leading up to independence, Mashriqi and the Khaksars moved aggressively to ensure that the British would have no choice but to quit India, as summarized below.

On November 7-10, 1946, a Khaksar military camp was held in Peshawar in which military exercises were conducted and the plan for a coup was finalized. On the last day of the camp (Nov 10, 1946), Mashriqi delivered a fiery speech to a crowd of 120,000 (including 10,000 uniformed Khaksars) comprised of Muslims, Hindus, Sikhs, Christians and other faiths. During the speech, Mashriqi again spoke about British exploitation (Al-Islah November 15, 1946) and inspired the masses to revolt and overturn British rule. On December 01, 1946, just a few weeks after his speech at the said Khaksar camp, Mashriqi made the following announcement in a pamphlet:

“Idara-i-Aliya [Khaksar Headquarters] shall soon issue an order that in the entire India, four million [sources quote a range from 4-5 million members] Khaksars, side by side with hundreds of thousands rather millions of supporters shall march simultaneously…This moment shall dawn upon us very soon and that is why it is being ordered that a grand preparation for this historical day should commence immediately…so that British can clearly witness the day of India’s freedom…”

The above message was widely distributed via flyers, wall writings, billboards, cinema slides and in Khaksar speeches in India. Furthermore, Al-Islah newspaper dated December 06, 1946 announced a street march of 10 million people (with spades); the announcement invited the masses from all faiths and backgrounds (civil and military) and also declared the issuance of 10 million advertisements in order to bring an end to British rule in the Indian sub-continent.

Such open and county-wide invitation of revolt was a clear signal to the British rulers that Mashriqi was going to overturn British rule. Thus, British Prime Minister Attlee soon announced that power shall be transferred “by a date not later than June, 1948.” Following this announcement, Mashriqi again took a number of steps to ensure that this was not a ploy by the British. For example, the British could have used their favored leaders (with whom they would hold talks) to instigate country-wide riots between Muslims and Hindus in an attempt to legitimize that the country was not ready for independence. Mashriqi would not allow this type of gambit to be played and put the last nail in the coffin for British rule when in March of 1947, he ordered 300,000 Khaksar soldiers to assemble in Delhi on June 30, 1947 to overthrow British rule (the British feared the gathering of such a large number of Khaksars).

On May 14, 1947, Mashriqi again addressed over 50,000 people in Patna and called for a Muslim-Hindu revolution:

“…The last remedy under the present circumstances is that one and all rise against this conspiracy [partition] as one man. Let there be a common Hindu-Muslim Revolution in which not hundreds but millions will lose their lives by the bullets of Birla and the British. Millions will die, no doubt, in this way but hundreds of millions will be saved forever. If man has decided to kill man for sheer lust of power and with nothing to show to the world except tyranny and loot, it is time that we should sacrifice men in millions now in order to uphold Truth, Honour and Justice.”

Faced with the prospect of a revolution, the rulers saw the writing on the wall and Lord Mountbatten hurriedly announced the Mountbatten Plan to transfer power. The plan was accepted by Muslim and Hindu leaders (including M.K. Gandhi) weeks before the assembly of the 300,000 Khaksars (despite the acceptance of the plan and a strict lockdown on public assemblies via Section 144, 70,000-80,000 Khaksars still assembled in Delhi according to The Tribune Lahore, July 02, 1947; according to the Khaksar circle, the gathering was much larger than the 80,000 reported in the newspaper).

A powerful ruler does not quit or transfer power without a strong threat to their rule; Mashriqi and the Khaksars were the threat that ultimately compelled the British to relinquish their rule in the Indian sub-continent.

In closing, while Bose certainly played some role in the freedom movement, his role was limited to fighting from outside India and ended before independence was achieved. Meanwhile, Mashriqi and the Khaksars were fighting from within India and continued to remain a powerful force that helped ensure the end of British rule in 1947. It is ironic then that Mashriqi’s crucial fight and sacrifices for independence have been ignored. In the context of this article, I have only just briefly summarized Mashriqi’s role; I cover the subject in much more detail in my published works. I urge the Government of India to provide Mashriqi official recognition (as they have done with Bose) and release Mashriqi and the Khaksar Tehrik’s confiscated documents (pre- and post-partition). It is imperative that the public is not only aware of Mashriqi’s sacrifices in bringing freedom to the Indian sub-continent, but also how Mashriqi fought to keep India united. By not declassifying Mashriqi and the Khaksar Tehrik’s documents, India and Pakistan are depriving the people of the truth about how the freedom of the Indian sub-continent came about.

Historian and scholar Nasim Yousaf’s extensive knowledge of the freedom movement comes from exhaustive secondary research and direct accounts from Mashriqi’s sons, daughters and the Khaksars, all of whom were part of the freedom movement. His works have been published in renowned peer-reviewed publications and he has presented papers at prestigious academic conferences in the US. His books can be found in major research libraries in many countries.