Despite Its Characteristic Boast, Aligarh Muslim University Could Not Chart a Path for Modernity and Progress of Indian Muslims

Prime Minister Narendra Modi is going to address the centenary celebrations of the Aligarh Muslim University on 22 December. The event is online. If it wasn’t for Covid, he would likely be on campus. This is the first time since 1964 that a prime minister of India is going to address AMU. Fifty-six years is a long time, and except for Jawaharlal Nehru and Lal Bahadur Shastri, no other prime minister thought of visiting the university, even though Aligarh is only 120 km from the national capital, and AMU is a fully funded central university whose Visitor is the President of India.

The proposed address by PM Modi is a well-thought gesture full of symbolism. As he often emphasises, Modi is the prime minister of 130 crore Indians, which includes about 20 crore Muslims. He belongs to an ideological stream whose understanding of history is much different from how Muslims would look at India’s past and their role in it. Therefore, their idea of the present and the vision for the future remain equally contested.

Past without a Closure

The Aligarh Muslim University has been a part of that contentious history, and must face up to its history in the spirit of truth and reconciliation. Sir Syed Ahmad Khan, the founder of Muhammadan Anglo-Oriental (MAO) College, the institution which became AMU in 1920, is alleged to have propounded the two-nation theory. It’s another matter that if his successors had not totally buried his social and political ideas, alongside his religious thought, there was much in his speeches and writings to place him among the founders of composite nationalism.

It was the Muhammadan Educational Conference, the vehicle of the Aligarh Movement, which doubled up as the founding session of the Muslim League at Dhaka in 1906. MAO College hosted the League till 1912 before its headquarters were shifted to Lucknow. The politics of Muslim separatism was institutionalised in Aligarh, which, by the 1940s, had become, in Jinnah’s words, “the arsenal of Muslim India”. Later, poet Jaun Elia would quip that Pakistan was a prank played by the juveniles of Aligarh (“Pakistan — ye sab Aligarh ke laundon ki shararat thi”).

That this practical joke, by its sheer thoughtless adventurism, turned out to be a monumental tragedy, which sundered the country into two and the Muslim community into three, is yet to be confronted by Aligarh. The inability to confront its past, and the ruse of feigning amnesia in this regard, has also led to the collateral forgetting of nationalist and progressive streams, which though not dominant, were nonetheless quite robust strands. 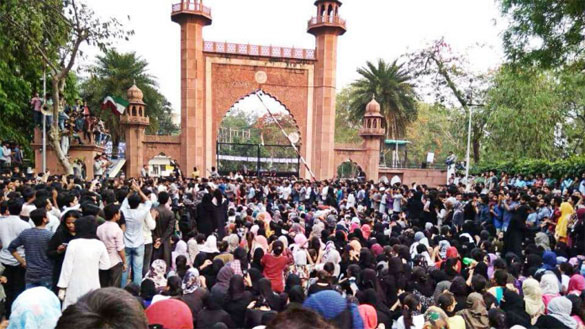 That this could happen despite the fact that AMU is endowed with a Centre of Advanced Study in History is even more surprising. History has to be written no matter what be one’s methodology, analytical tools, philosophical inclination and ideological orientation. Developing an Akbar-Aurangzeb centric school of history may be a noble endeavour, and nobler may be the zeal to argue how secular were the Muslim rulers — Aurangzeb being the most secular of them all — but expatiating on secular nationalism of people like Zakir Hussain and Mohammad Habib, in the face of frenzied communalism, would be much better if one didn’t fight shy of calling the mainstream Muslim communalism on the campus by its name.

This could not happen because post-Partition, Aligarh was reassured and rehabilitated, but not reformed. It reflects the high-mindedness of independent India’s leadership, how they protected and preserved AMU even as most of its faculty and students deserted it for the greener pasture of their conquest, Pakistan. An un-critiqued and un-reformed Aligarh would continue to inhabit the same narrative as earlier. Thus, despite its characteristic boast, Aligarh could not chart a path for modernity and progress of Indian Muslims and their integration and mainstreaming in the national life. The emotional chasm between the two communities kept widening despite the increasing commingling of people. And so, instead of giving intellectual leadership to the Muslim community, to which AMU considered itself traditionally entitled, and for which it is statutorily mandated by its founding Act, Aligarh chose the regressive path.

On such politically momentous issues as Shah Bano and Triple Talaq, despite having the material wherewithal to come up with its own progressive position, Aligarh’s intellectual sterility made it toe the line of the ulema and the reactionary Muslim Personal Law Board, the very people against whose thought the university was founded. It became complicit in the cultural regression and political alienation of the Muslim community, and could not intervene when a second separatist movement got underway in the name of identity. On the question of Babri Masjid, the Aligarh academia adopted the Leftist line of limited technical correctness, oblivious of the fact that the issue had far deeper implications for the Muslims than the Leftist arguments could see them through.

A Chance for Reconciliation

Now that Prime Minister Modi, staunch in his own ideological position, is going to address AMU in a grand gesture of reaching out, its symbolism should not be lost on anyone. More so, as this moment comes not very long after the physical assaults and vicious propaganda against the university by Right-wing groups that swear allegiance to the Modi government. Stigmatising AMU over Jinnah’s portrait, which hung, among many others, in the student union’s building for he was an honorary member of it, was malicious, even as the arguments against removing it were too untenable to be sustained, too nuanced to be understood and too disingenuous to be given any credence.

Be that as it may, notwithstanding every imaginable criticism of AMU, the fact could not be ignored that this campus has the highest concentration of modern, educated Muslims anywhere in the world. So, even if it couldn’t realistically boast of being the intellectual vanguard of Indian Muslims, in sheer quantitative terms, and in view of its historical legacy, it has an unsurpassable symbolic value for the Muslim community.

Now that the prime minister is reaching out, should Aligarh, on behalf of the Muslims, not grasp the extended hand of friendship and reconciliation? It is for Aligarh to decide whether it would wean away Muslims from the path of confrontation, which, if not shunned, is bound to bring an unimaginable catastrophe, or to put them on the path of conciliation as Sir Syed did with the British.

An alumnus of AMU, Mukhtar Masood, mentions an anecdote in his book Awaz-e Dost, wherein sometime after Independence, while addressing the governor of Uttar Pradesh, Sarojini Naidu, in the Union Hall, a student said, “Ya To Hum Aapke Bade Dushman Hain Ya Chhote Bhai Hain (we are either your big enemy or little brother).” The reality is simpler than this. Muslims are neither. They are equal as Indians and citizens. Let this opportunity not be missed.

Original Headline: Modi is reaching out. AMU has a chance to take Muslims away from path of confrontation