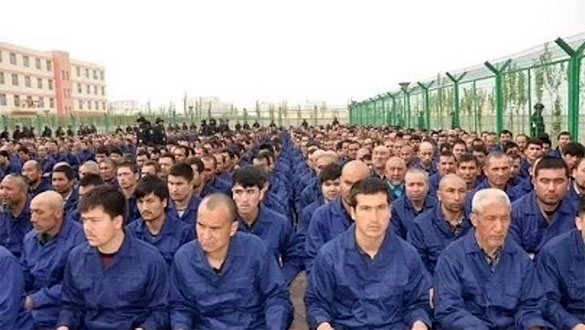 The persecution of Uyghurs by the Chinese government is far more severe than what is reported. They are being detained in detention centres called re-education centres since 2017, the same year the Rohingya Muslims were massacred and forced to leave Myanmar.

The Communist government of China has not only taken steps to‘re-educate' the Uyghurs but has tried to reduce them to a helpless minority in the region they were once in majority.

They are being tortured, being forced to sing patriotic songs at the top of their voices and forego their religious identity. Uyghur women are forcefully sterilised, gangraped and even killed.

Their children are separated from them and kept in separate hostels for’re-education'. In this way, the Chinese government has been trying to take the religious and cultural identity of Uyghurs away. Praveen Swami's article on Uyghur persecution gives new insight into China's policy towards Uyghurs and Xi Jinxing’s ruthless crackdown on once prosperous and lively Uyghur community.

Each spring, as the figs ripened, a small army of gamblers, thieves, kings, sex workers, fruit-sellers, bakers and cooks emerged out of the enormous emptiness of the Taklamakan desert. “Whoever is in need and makes pilgrimage to this blessed tomb and enlivens the place and makes the pots boil, and makes the lamps burn, and gives prayers and praise,” an ancient devotional text  promised the people, “their needs in the world and in the afterlife will be satisfied.”

“They are busy, not with making pilgrimage or circling the shrine,” historian Rian Thum has recorded a pious Kashgar author grumbling a century ago, “but with their own professions and business.” “For them, it is the same whether they get into a Chinaman’s coat or a shrine.”

Across centuries, these shrines helped cement the identity of the Uyghurs— the Turkic Muslim people who inhabit China’s Xinjiang. Then, early in this century, they began to disappear. Late in 2007, when Thum tried to visit the Ordam Padshah shrine, he was blocked by police who told him there was “something secret” in the desert. The Imam Asim Ali shrine near Hotan quite literally vanished,  satellite imaging showed.

To some, the policies of the People’s Republic of China in Xinjiang— banning the hijab and other displays of personal religiosity, restrictions on seminaries, demolitions and harsh sentences for sedition—might seem like a model for how India ought to deal with its own conflicts over identity and Islam. Instead of bringing about integration, though, China’s policies have devastated a people and built a despotism—thus laying the foundations for generations of hatred to come.

The Obliteration of the Uyghur

Earlier this week, a report United National High Commissioner for Human Rights charged China with using State power to systematically obliterate Uyghur identity. The government of China declined to share figures with the UNHCR, but its report points to expert estimates that one in five ethnic Uyghur across Xinjiang was subjected to detention in 2017-2018. Torture of prisoners immobilised in a so-called ‘Tiger Chair’ as well as sexual violence were endemic in the camps, UN investigators were told.

The camps were designed as production lines for patriotism: “We were forced to sing patriotic song after patriotic song every day,” one former prisoner said, “as loud as possible and until it hurts, until our faces become red and our veins appeared.”

Xinjiang’s mass incarceration programme has targeted individuals suspected of having extremist sympathies: Long beards, refusing to watch television, or wearing certain kinds of clothing can invite prison sentences. In one bizarre case, documented in a report for the UN by researcher Bahram Sintash,, the Islamicate dome of the Bahar Departmental Store was first concealed under a less-Islamicate octagonal structure, and then removed altogether.

Even though the Chinese government insists it is committed to bilingual education, UNHCR investigators record the existence of documents urging schools to teach only Mandarin in primary, elementary and middle school.

The Chinese government, in its response to the UNHCR report, dismisses the allegations as “lies and fabrications.” The response asserts extraordinary measures were necessitated because terrorists carried out “several thousand terrorist attacks in Xinjiang from 1990 to 2016,” in which “a large number of innocent people were killed and several hundred police officers died.”

Faced with a growing jihadist movement, the argument goes, China was left with no option other than reengineering their secular, national culture.

Like much propaganda, this story is notable for its omissions. From the late 1950s, millions of ethnic Han workers began to arrive in Xinjiang, mainly to work on roads and infrastructure of strategic value. Economic growth across China led to a sharp increase in investments in Xinjiang in the 1990s as part of government-driven modernisation plans. From 2000 to 2009 alone, fixed investments in Xinjiang added up to Yuan 1.4 trillion—or $200 billion—more than 80 per cent of which was government-provided.

For many of them, expert Graham Fuller has perceptively noted, , the new skyline of Urumchi was “not as a symbol of national pride but of their ethnic and religious humiliation, and as a monument to their own ultimate displacement.”

Ever since the early 20th century, Xinjiang had been influenced by Islamist movements in southern and western Asia—led, among others, by the Indian-educated Han Weilang. The demographic and economic crisis faced by the Uyghur empowered the religious Right-wing. In 2009, large-scale ethnic riots broke out, with knife-wielding mobs killing 197 people. A suicide bombing followed in 2014.

From May 2014, the government unleashed Hard Strike—its crackdown on the Uyghur. It followed  a secret speechby President Xi Jinping, where he urged officials to act without mercy.

The Chinese government claims its policies are a success. Ever since 2016, there has been no terrorist violence in Xinjiang, and the government claims that the last internees  “graduated” from reeducation three years later. Large-scale repression in Xinjiang, however, shows the regime is still anxious. Large numbers of Uyghur jihadists have appeared on jihadist battlefields from Syria to Afghanistan, and China knows they could one day return.

Led by drummers, processions of tens of thousands would assemble at Ordam Padshah each year to mark the martyrdom of the First Imam of the shi’a faith, Alī ibn Abi Talib. Flying flags borne from their hometowns, the great processions would march towards the shrine, using music, dance and chanting to lead their members into ecstatic states. Swedish diplomat Gunnar Jarring observed the “crying and wailing in honour of the holy martyrs” with some disdain: “Religious fanaticism,” he recorded.

Little clarity exists on exactly why Chinese authorities began their campaign against shrines. Journalist Alice Su has noted that even political Islam has been tolerated among the ethnic Hui Muslims, with neo-fundamentalist magazines and teaching circles flourishing on the fringes. The reasons might be rooted in politics. The Hui, unlike Uyghurs, have never sought independence and their leadership has been studiedly apolitical.

Few Hui clerics,  one activist told Su, are concerned with the jihad, focussing instead on questions like: “Is your iPhone 6 or 6S? What kind of car are you driving?”

The wrath of the People’s Republic, Rian Thum has speculated, might also have descended on Xinjiang’s shrines and mosques because of their potential to mobilise large groups of people—not because of a specific ideological problem.

Like it has in Tibet, the Chinese State might well succeed in crushing Xinjiang: The brutal realities of demography and police power mean there’s little prospective of a genuine threat to the State ever emerging. The victory isn’t without consequences, though. The tools the Chinese State built and honed in Xinjiang will have consequences for all of the country’s people. Efforts to eliminate Uyghur identity, moreover, haven’t led to greater integration or equity.

“They made a desolation and called it peace,” historian Tacitus wrote of the imperial victory over Britain. Xi’s triumph in Xinjiang will likely be remembered similarly.pastedGraphic.png