Indian Muslims Seek Equality From The Secular Constitution, Not Shariah

By now, the world knows that Prime Minister Narendra Modi of India and his Hindu supremacist Bharatiya Janata Party (B.J.P.) have eroded the liberal principles of the Indian Constitution and are turning the country into an increasingly illiberal democracy. It is common knowledge that Mr. Modi thrives on the grievances and bigotries that pit privileged majorities against minorities living in fear. 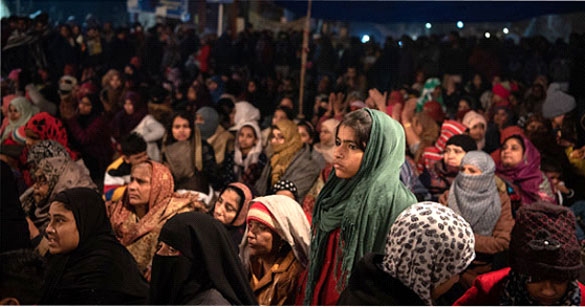 Less familiar, but much more hopeful, is the response of the main target of this majoritarian assault: India’s Muslim minority — roughly 172 million people who account for just about 14.2 percent of India’s total population of approximately 1.32 billion people, roughly 79.8 percent of whom are Hindu.

This large religious minority of Muslims has gone through a hard time in recent years at the hands of Hindu supremacists: They have faced lynchings, lethal riots, and social and political disenfranchisement. 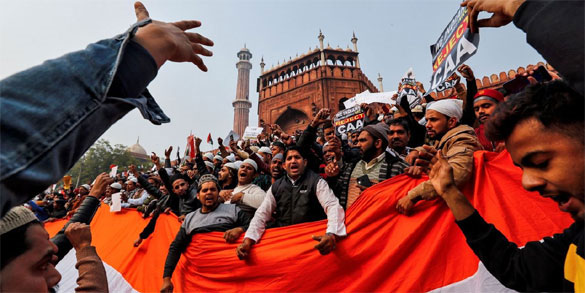 Here’s why Muslims aren’t the only Indians taking to the streets. Photo: Sajjad Hussain/AFP via Getty Images (Originally published Dec. 17, 2019)

When minorities are pushed to such walls, they may retreat into a siege mentality that breeds radicalization. But India’s Muslims have not come up with calls for violent jihad, nor chants for Shariah law. Instead, they have embraced and emphasized the blessings of liberal democracy by placing their faith in the Constitution of India and insisting on their constitutional rights as citizens.

This hopeful tack was most visible during the mass protests for three months that started in December against the Citizenship Amendment Act, an unabashedly discriminatory law enacted by the government that fast-tracked citizenship for Hindu, Sikh and Buddhist immigrants from neighboring countries, but not for Muslims, whom Home Minister Amit Shah tried to dehumanize as “termites.”

Mr. Shah has also proposed a national register of citizens requiring documentary evidence for place of birth and residence that many Indians, especially the poor, lack. Of these the non-Muslims could escape through the loophole in the new Citizenship Amendment Act, but Muslims would find themselves stateless and liable to be put into detention camps.

In response, Shaheen Bagh, a neighbourhood in New Delhi, held a 101-day sit-in against the citizenship law and the proposed citizenship registry, with the protest led not by conservative Muslim clerics, but by Muslim women. Thousands occupied a protest tent 24 hours each day by rotating in shifts and displaying banners saying, “We stand for peace, harmony and fraternity.” They also showed portraits of the Hindu leaders who led India’s independence movement, and festooned their dais with the preamble of the secular Constitution.

The B.J.P.’s propaganda machine depicted Muslim protesters as “traitors” and “anti-nationals,” but they were wearing headbands saying, “I love India.” waving Indian flags, and repeatedly singing the national anthem.

In other campaigns, Indian Muslim women in recent years challenged not just Hindu supremacism but also patriarchy within their own community. Through successful appeals to the Supreme Court — which upholds India’s constitutional principles — they obtained a legal ban in 2017 on “instant divorce,” a contested Shariah ruling that gives Muslim men the right to abandon their wives at will. Another Muslim women’s group gained a 2016 court decision that enforced women’s constitutionally guaranteed right of equal entry, along with men, to a Sufi shrine in Mumbai.

All such liberal moves, according to Sharik Laliwala, a Muslim Indian commentator, signify “a fundamental transformation in the political strategy of the Muslim community.” Indian Muslims, he added, are “marrying a constitutional phraseology of freedom, justice and equality with religious notions.”

Irfan Ahmad, an Indian anthropologist based at the Max Planck Institute in Germany, argues that what is happening is a new emphasis rather than a transformation, which Indian Muslims have always sought along with pluralism. The protests in Shaheen Bagh, he adds, highlighted the rift between the B.J.P.’s rule by and for the Hindu majority and a new vision of democracy that would uphold the rights and dignity of all Indians, including Muslims.

Yet there is still a danger that B.J.P. ruthlessness may backfire and drive Muslims into radicalism. In September, Umar Khalid, a secular left-wing student leader who is Muslim, was arrested on highly contested charges of orchestrating Hindu-Muslims riots last February in Delhi, where most victims were Muslim.

All of this means that India is on a very wrong track. A country that does not treat its minorities as equal human beings will be not the world’s biggest democracy, but rather a tyranny of the majority.

The results may be social strife, radicalism, decline of economic progress, and the ruination of India’s image abroad. The country is already being criticized by human rights organizations for violating human rights in Kashmir, and more recently for forcing Amnesty International’s office in India to close.

India’s story could hold lessons for Muslims elsewhere. Across the border, Pakistan long ago established what India’s B.J.P. seeks: an ethno-religious state dominated by the majority. In Pakistan’s case, this means the hegemony of Sunni Muslims at the expense of minorities such as Shiite Muslims, Ahmadis or Christians.

Farther in the East, in Malaysia, Malay-Muslim supremacy has been an official ideology since the founding of the multi-religious nation in 1957. In Turkey, the Islam-infused populism of President Recep Tayyip Erdogan, with its own insatiable wrath against “traitors” and “anti-nationals,” has strong parallels with Mr. Modi’s populism. And in the parlance of Islamist movements everywhere, “liberalism” and “secular state” are only dirty words, if not heresies.

Alas, it seems that many Muslims in countries other than India enjoy the tyranny of the majority when they themselves are in the majority and control the state, while others realize the blessings of liberalism if they are in minorities. Of course, such a double standard is neither virtuous nor defensible.

A more principled Muslim view of politics is needed, and for that, Muslim opinion leaders should observe the experience of their coreligionists in India. The latter, the largest religious minority in the world, has an important story with a lesson: Human rights and liberties must be defended in every nation, in every civilization. Without them, only power rules. And instead of betting on power, which may be won or lost, they should try to constrain it everywhere, so that no one group is oppressed and everyone is free.

Mustafa Akyol and Swaminathan S. Anklesaria Aiyar are writers and fellows at the Cato Institute.

Mustafa Akyol, a contributing Opinion writer, is a senior fellow on Islam and modernity at the Cato Institute, and the author of the forthcoming book “Reopening Muslim Minds: A Return to Reason, Freedom, and Tolerance.” Swaminathan S. Anklesaria Aiyar, a research fellow at the Cato Institute, is a columnist for The Times of India, and a commentator for India’s television.