The protesters at Shaheen Bagh in Delhi have made their point. The picketers, primarily Muslim women of the area, have demonstrated their resolve to stand up not just for the rights of the Muslim minority but, more importantly, for the secular spirit of the Constitution. Waving the national flag, carrying photos of Mahatma Gandhi and B.R. Ambedkar, and reciting the words of the Constitution’s Preamble, they have challenged the government’s narrative that the Citizenship (Amendment) Act was merely an attempt to fulfil Gandhi’s wishes. The Shaheen Bagh protests will become a part of both the history of India’s democratic movements and of the chronicle of women’s empowerment. 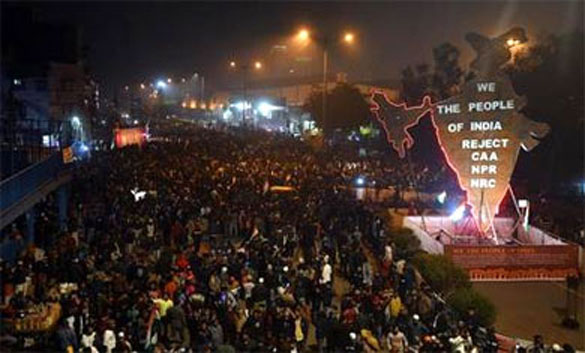 However, there is a time when protest movements become counterproductive and the organisers and participants of such movements should have the sagacity to recognise this fact. For the Shaheen Bagh protesters that time is now. The principal reason for this conclusion is that with the Delhi Assembly elections around the corner, they have increasingly become pawns in the electoral game being played in the national capital.

It was a fundamental mistake on the part of the protest’s organisers to allow leaders of political parties to use their platform to make speeches that not only served partisan ends but also were unnecessarily provocative and sometimes uncivil. This combined with extremist pronouncements by some of the people, such as Sharjeel Imam, associated with the protests have sent the wrong message that the protests were not only undertaken for partisan reasons but had also fallen into the hands of extremist elements. The shutting down of one of the main roads in the area for a long time added to the negative image of the protests around Delhi.

Moreover, there have been two shooting incidents near the protest venue. Although no one has been killed, there is no guarantee that the next one may not inflict grave injuries or cause fatalities. While the protesters are not involved in such incidents, many hold them responsible for the deteriorating law and order situation. With the U.P. Chief Minister’s entry into the Delhi electoral fray and his incendiary speeches, and the Hindu Sena’s threat that it will clear Shaheen Bagh by force, the situation is becoming volatile. The Shaheen Bagh protesters will be blamed if this escalating inflammatory rhetoric leads to a communal riot.

The protesters must recognise that all this serves the interests of both the Congress and the BJP. For the Congress, which is in the doldrums in Delhi, the protest is an invaluable stick to beat both the BJP, which is adamant that the CAA must be implemented, and the Aam Aadmi Party, which has been talking out of both sides of its mouth regarding the Shaheen Bagh protests and the CAA. But the greatest beneficiary of the continuing protests is the BJP. The protests help the party consolidate the Hindu vote behind it and allow it to paint the AAP and the Congress as anti-Hindu. This is why the Central government has allowed the protests to continue without interference by the Delhi police.

Therefore, it is time for the protesters to recognise that their actions are leading to far more negative outcomes than positive ones. The entire exercise has outlived its usefulness. It is time for them to wind up their sit in after issuing a statement that the protest has achieved its objective: they have squarely registered their dissent against the CAA and successfully linked the discussion of the CAA with the National Register of Citizens. They should learn from the Mahatma who did not desist from calling off protest movements when he recognised that they had outlasted their effectiveness. The termination of the Shaheen Bagh sit-in does not preclude the fact that those opposed to the CAA and NRC may continue protesting in a fresh mould free of political capture attempts after the Delhi elections are concluded.