Mohamed Nasheed: Islamists have a stronger hold on power than ever in the Maldives 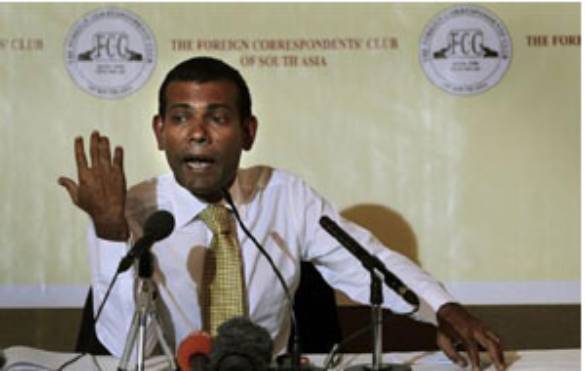 Mohamed Nasheed, in an interview with Praveen Swami

Ever since the February 6 coup which overthrew Mohamed Nasheed's government, the ousted Maldives President has been visiting world capitals, seeking greater international effort to ensure the restoration of democracy The signs are bleak: the government that succeeded him has dug in its heels in the face of international calls for early elections. Mr. Nasheed discussed with Praveen Swami the future of democracy in the Maldives, his expectations of India and the unfolding political crisis in his country.

There is mounting concern over whether early elections will be held in the Maldives; the government seems to be digging in its heels in the face of mounting international pressure.

I'd like to be optimistic about the future: after all, I gave 20 years of my life fighting for democracy in the Maldives. The fact is that we have lost democracy just three-and-a-half years after our first multi-party elections, which were held in 2008. The man we fought against, Mr. Gayoom is back. Islamists have a stronger hold than ever on power, though they have never won an election. I fear that unless India, as well as other nations, unequivocally put their weight behind the call for early elections, very dark times lie ahead for my country.

How satisfied are you with India's response to this crisis? Do you think New Delhi should be doing more?

I was sad when the coup took place, because it seemed to me that India did not understand the seriousness of events in the Maldives. I do understand India has complex issues to deal with when engaging with its neighbours. I think India could have secured an election date much earlier though, had its diplomacy been a bit more forceful. Please don't get me wrong: I know I am speaking with the benefit of hindsight. In my years in prison, I read a great deal about the vision of Jawaharlal Nehru. I think that vision should inform India's actions.

Perhaps India's response was unclear because of divisions over whether the overthrow of your government was a coup, or the outcome of general resistance.

Look, what happened on February 6 was without dispute a coup d'état. It was mounted by elements of the Maldivian elite who are hostile to the progressive reforms we were instituting. Our per-capita income is $6,000 — but one in three Maldivians earns less than $1 a day. This was a disgrace. We set up an employment tribunal and instituted a minimal wage. We introduced an income-tax and a general sales tax. We succeeded in raising government revenues from $7 billion to over $11 billion. See, I grew up in a Maldivian business family. I have seen feudalism first-hand. Now, the thing is, when you have democracy, a billionaire and a peasant get one vote each. Some people, quite obviously, prefer being feudal lords.

The government that has come to power isn't, however, just made up of the ruling elite. It consists also of the Islamists, that very elite once ruthlessly suppressed. Does this indicate that there was, in fact, a broad coalition against your government?

The coalition you see today has been put together to seize power, not to govern. The dictator we spent 20 years fighting, Maumoon Gayoom, has put together an alliance with the Islamists. My fear is that if we delay elections until 2013, Mr. Gayoom will help the Islamists expand their authority, and entrench himself. Please note, the Islamists lost the 2008 Presidential elections badly. They did not win a single seat of 77 in the elections to Parliament. They did not win a single one of the 1,081 local body seats. Now, though, they have three cabinet posts. They are already talking about changing the school curriculum and rolling back many of our policies.

In your three-and-a-half years in office, you in fact opened up considerable space to the Islamists, for example by allowing underground Salafist mosques to operate freely. Do you regret this now?

The simple answer is no. I think opening up the Maldives was the right decision. Look at what is happening in the Maldives now: women are out on the streets, pulling the beards of the mullahs and using all kinds of loaded words about them for destroying democracy. Why has this happened? In our three-and-a-half years in office, we empowered women: we ensured income support for single mothers; we gave women free health care; we gave them real political rights. Freedom of speech gave the Islamists the right to speak — but it also gave their democratic opponents a new political vocabulary. My intelligence services monitored attendance at Salafist mosques, and we saw it fall regularly. Earlier, Salafist mosques were the only places for someone with a grievance against the state. The point is, liberal democracy depends on everyone playing by the rules — which our opponents have not done.

It wasn't just a question of opening space, though. You even released terrorists convicted of a bombing in Male in 2006.

No, we didn't let anyone off. We moved some prisoners back to their homes, in an effort to rehabilitate them. There was a reason for this. The prisoners had been proselytising inside prison; young drug users in jail were very vulnerable to their message. Now Rohan Gunaratne, who I had earlier worked with in Sri Lanka, had shown exceptional results rehabilitating Jemaah Islamiyya prisoners in Singapore. We thought we would experiment with the same approach. I think it paid off. Himandhoo, one of our islands, had become a centre for Salafist extremism.

People there would not even allow their children to be vaccinated, saying it was anti-Islamic. But I kept visiting — and one day, the mothers started bringing their children for their shots. Not a child today in Himandhoo is un-vaccinated.

Your critics would also say your party, the Maldives Democratic Party, is precipitating a crisis, with the local bodies it controls in the south essentially defying the central government.

The One and a Half Degree Channel, which divides the southern Maldives from the northern Maldives, is very wide. The north and south speak different dialects and have different cuisines. But this is not the problem. The problem is that an unelected government is attempting to impose its will on elected local bodies. That is utterly illegitimate. Why should elected leaders defer to the will of unelected ones?