We Are More than Our Name: A Gujarati Muslim Ponders Life under Narendra Modi

This piece was intense for me, my eyes welled up - how can humans be stripped off their dignity? As an Indian American Muslim, I can relate with this and will write about it one of these days. However, what has been stressful for almost a week now, is the op-ed I am writing; Modi, Muslims and moving forward.

The op-ed was prompted by a note written by Rafiq Lodhia to an email list of Indian Muslims, then the email list expanded to include a few Modi supporters.  - The discussion could have been meaningful but for the unfortunate attitude of my fellow Muslims who wanted a pound of flesh rather than justice to the people.

As an individual, I am figuring out how best to find a solution. It was good to read the following article, it reinforced that I am doing the right thing. My article is not easy on Modi or Muslim leadership, but offers a solution where everyone can win, particularly the ones whose livelihood was snatched, who lost their loved ones, homes, businesses and everything. My focus is them.

Every day, I am meditating, and praying that this piece brings some healing and some thinking among Modi Supporters and Muslims, it offers a solution. A few friends have looked at it, and have encouraged the intent of it. When it gets published, please be honest with your criticism or appreciation. I am committed to present pluralistic solutions on issues of the day. we cannot be rotting in the same stench for another ten years.

I am blessed to be a minority, blessed to feel the anguish and pain of the people who are pushed around.

We Are More than Our Name: A Gujarati Muslim Ponders Life under Narendra Modi

I kept waiting for the phone to ring during the Gujarat riots in 2002. The week before I left for India, my father invited his Gujarati Hindu colleague Rupa Aunty for dinner at our house in California. When I was a kid, I tied the Rakhi brotherhood bracelet on her son. When my mom was diagnosed with cancer, Rupa Aunty was the first to spend the night with us at the hospital. 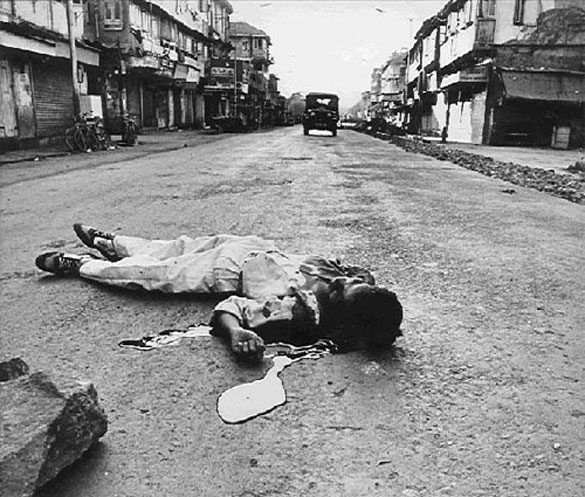 “If you need anything at all,” she told me just before I left for India, “my family is from Ahmedabad and we will be there for you.”

I grew up in California mispronouncing names of Gujarati dishes like thepla and my trip to Ahmedabad in 2002 was the first time anyone in my family had returned since my grandparents left Gujarat for Tanzania in the 1920s. This – my father kept reminding me – was my trip “home.”

Twelve days after I arrived as a service corps fellow with the America India Foundation, a train carrying Hindus was attacked in the Gujarat city of Godhra on February 27, 2002. The Gujarat Chief Minister, Narendra Modi, who may well become India’s next prime minister, was quick to blame the attack on Muslims.

The next morning, a Hindu mob carrying swords, torches, and kerosene filled bottles walked on my all-Hindu street in Ahmedabad looking for Muslims – Muslims like me – to kill. They made us shout names of Hindu deities that my parents taught me to say with reverence. In the distance I could see a lone business, owned by a Muslim, up in flames. When the mob passed, I ducked into an internet café and passed the front desk, hoping I would not have to sign in with my unmistakably Muslim name. But a young man stopped me.

“Sir, your good name, please?” he said, handing me a clipboard.

I closed the curtain in the internet booth and held back tears as I emailed my parents the lie I needed to tell them: yes mom and dad, I am safe.

My father, a devout Muslim whose fondness for Mahatma Gandhi and Hinduism prompted him to give up meat as a young man, kept calling me during the riots.

“Have my friends contacted you? Have they offered to help?”

I did not need to tell him the answer. He knew.

“Just come home,” my father pleaded. India was suddenly alien and would never again be called “home” by anyone in my family.

During the riots I worked in the relief camps of Ahmedabad where tens of thousands of displaced Muslims fought for space and food in spaces half the size of a soccer field. I will never forget 12 year old Sadiq who watched both of his parents burned alive. In my six months working in the relief camps, I never heard him say a word. No one did.

When I returned to the US, the Gandhi picture my dad gave me when I graduated from high school was no longer hanging in my childhood bedroom.

“Gandhi is dead,” my father said.

All I wanted do after the riots was to talk about the riots. I traveled across the US for a year giving lectures. Everywhere I went I carried a small yellow plastic bag filled with newspaper clippings and photos of the homes, mosques, and lives I saw destroyed. When people doubted me, I would open up my bag.

“Here, this is what I saw. It really happened.” But many chose not to listen.

I grew distant from my friends. I stopped watching basketball. I started taking anti-depressants. My smile, friends kept reminding me, disappeared.

I switched my career to human rights and spent nine years working in Washington DC, mostly at Amnesty International. But I kept wondering: what happened to all those children I met like Sadiq who saw so much? How do they – and how do I – move on?

In March 2011, I quit my job as a foreign policy aide in the US Congress and returned to Gujarat for the first time in nine years, against the advice of my psychiatrist.

When I arrived, Hindus would not rent an apartment to me because I am Muslim and Muslims – now more insecure after the riots – told me they did not trust me. I ended up staying with a Hindu friend of mine. But there was one condition: I could not use my real name in the apartment building. Sanjay was back.

I begun conducting interviews and when I explained to Muslims in Ahmedabad that I returned using my own funds to write about the riots – and that the riots filled me with a loneliness that has not yet disappeared – some laughed.

They have a point. Muslims I interviewed say they want more than justice. They want an end to employment discrimination. They want paved roads. They point out that in the Muslim ghetto of Juhapura where over 350,000 live, there are only six high schools – none of them government run.

But above all, Muslims in Gujarat told me they desire to be treated and viewed by their fellow Indians as Indians.

Last year, I interviewed a man named Nadeem Saiyed who organized survivors of the Narodya Patiya massacre to bear testimony to what they saw. A few months after I interviewed him, he was fatally stabbed 28 times. When I learned of his death, I replayed the audio from our interview. One line continues to haunt me.

Yes, the riots are over but the wound continues. Narendra Modi, after all, is popular in Gujarat because of the riots – not – despite the riots.

Today I am back in Gujarat and I live just two blocks away from where Nadeem was stabbed. When I decided to return to Gujarat this year to conduct more research, I was determined to retire “Sanjay” because I am exhausted from inventing a Hindu family that I do not have so that I may live in Gujarat.

After I failed to find an apartment in a Hindu area using my real name, I was forced to live in Juhapura, an area, some say, is the largest ghetto of Muslims in all of India. Police line is the street that functions as the “border” that surrounds this area and many Hindu rickshaw drivers refuse to enter Juhapura because they are “afraid.” On my street, a rickshaw driver, a real estate tycoon, a judge, and a nationally known journalist live side by side. I hear all of them repeat the same thing: “We live here because we have no other choice.”

Today in Juhapura I do not have regular running water in my apartment and my electricity cuts out often – something unusual in most parts, in particular in Hindu-dominated sections of Ahmedabad. When I finally registered my apartment lease with the police, a very kind Hindu officer told me I should be careful.

“The area you are staying is called mini-Pakistan and there are a lot of Pakistan intelligence (ISI) agents in the interiors.”

But it is here, only in this Muslim ghetto, where I feel safe.

I received the keys to my apartment the day before the Muslim celebration of Eid-al-Adha. The next morning I wore a crisp white Muslim style kurta over a pair of pleatless khakis and carried a white prayer skullcap in my hand.

All the men in my building had gathered at the front entrance. One man in his late 70s held his hand out as I came downstairs.

“Young man, I have not heard your complete name.”

I smiled and said the words I had to conceal so many times in Gujarat to survive.

“My full name,” I told him as we walked towards the mosque, “is Zahir Sajad Janmohamed.”

Three British Muslims from Batley, West Yorkshire were killed, and 1 Injured during the Gujarat Riots in February 2002, Last month marked the 11th Anniversary.

The Dawood Family Justice Campaign has been set up to ensure that we:

Compel the Indian Government to investigate the crime properly and thoroughly.

Urge the British Government to make the strongest possible representations; including taking any diplomatic action to ensure that justice is done for those who have been killed in such tragic circumstances.

Explore and mount legal actions where possible in India, Britain or abroad, against those responsible. Raise funds for any legal, distribution of information and campaign costs.