Afghanistan: Key to Revival of Silk Road, Keynote Address by The Deputy Chief of Mission (Minister Counsellor) of the Embassy of Afghanistan in India

Symposium on “Afghanistan: Key to Revival of Silk Road” 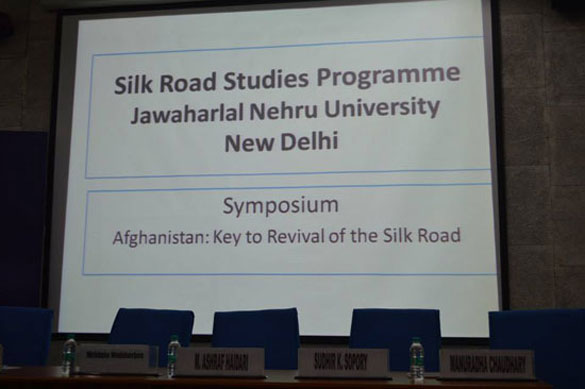 I am truly humbled to be a Guest of Honour at this prestigious symposium. And it is great to be among a gathering of distinguished scholars to discuss the topic of “Afghanistan: Key to Revival of the Silk Road.” Foremost, I wish to thank the Jawaharlal Nehru University (JNU) for convening this timely symposium, as part of the JNU Silk Road Studies Program, led by Professor Manu Mittal, whose passion about this vital topic of academic research I greatly admire. While this topic is frequently discussed in various Afghanistan conferences, it hardly receives the kind of academic attention and institutional support we see and appreciate at the JNU.

Of course, it is not through fleeting attention given to the topic by the press or some think-tanks. But it is through rigorous research into the topic and publication of in-depth research findings, by which can we expect domestic and foreign policies to be influenced into the right direction, for the common good of all peoples of the Silk Road countries. Thus, let’s hope that the JNU would find dedicated public and private partners and funders to elevate the status of the Program to a resourceful Centre of Excellence for Silk Road Studies. Once established, the Centre should be able to even more effectively promote an agenda of international cooperation for ensuring peace, security, stability, prosperity, and multiculturalism throughout the Silk Road countries and their related regions.

If we pick one country that best captures the essence and character of the Silk Road, it is Afghanistan. Diversity defines our ancient and modern history, our pluralistic society of many customs and traditions, our rugged terrain of many mountainous valleys, and our cuisine of many cultural tastes—among so much else. These rather unique Silk Road qualities and characteristics of Afghanistan are capped by the centrality of our geography at the Heart of Asia region, consisting of 14 countries, which form the backbone of the Old or New Silk Road. So, it is the quintessential importance of our geo-strategic and geo-economic location that makes us the most relevant and consequential country in reviving the Silk Road.

The New Silk Road is meant to unlock and harness the vast human and natural resources potential of the South Asia and Central Asia regions, which Afghanistan connects. In fact, it is also the vision of every multilateral cooperation organization—from the South Asian Association for Regional Cooperation (SAARC) to the Economic Cooperation Organization (ECO) and the Shanghai Cooperation Organization (SCO)—to create an integrated region of South and Central Asia where our countries’ collective potential of human and natural resources would be fully realized, and where critically important countries like Afghanistan can fully play our natural role. Indeed, serving as a land-bridge between the two main regions of the Silk Road remains our natural role, a role we have long sought to play in order to facilitate trade, commerce, investment, exchange of ideas and scholarship in and across Afghanistan.

Unfortunately, for too long, we have been denied the opportunity to play our rightful role in the region and, indeed, in reviving the Silk Road. For a decade in the 1980s, we became the prime victim of the Cold War, which our country’s countless sacrifices ended. For another decade in the 1990s, the negligence of our country’s post-Cold War stabilization and reconstruction foreclosed any hope of re-establishing ourselves in the international system. And for more than a decade now since the fall of the Taliban, we have been striving, in partnership with the international community, to secure and rebuild Afghanistan so we can increasingly play our natural and rightful role in the region and beyond.

However, as most of you know, insecurity with external roots remains a major impediment to Afghanistan’s stabilization and reconstruction. Certain state elements and their non-state instruments in the region remain obsessed with destabilization of Afghanistan. For over a decade now, they have supported a campaign of terror prosecuted by the Taliban, who daily kill and maim our innocent people. Despite our daily losses, however, the Afghan people have defied the terrorists and their brutal supporters outside Afghanistan, as we remain determined to consolidate and institutionalize our 12-year gains towards positive sovereignty backed by self-reliance in the security, defence, and development sectors.

Of course, we are not alone in this endeavour, for our fight against terrorism and extremism is naturally everyone’s fight against a common threat to regional stability and international peace and security. This fact was learned the hard way on 9/11 when terrorists led by Al Qaeda out of Afghanistan attacked the United States. And members of the same network trained by or with the Taliban have struck targets in other parts of the world, including India.

For four days this past week, over 2,000 Afghan delegates from all over Afghanistan gathered in a Consultative Loya Jirga in Kabul to deliberate on the draft of the Bilateral Security Agreement between Afghanistan and the United States (BSA). The draft Agreement is based on the Strategic Partnership Agreement between the two countries, which we signed in May 2012. And one of the principal provisions of the Agreement is to ensure the security and defence of Afghanistan against any external aggression, including the threat of external aggression, be it by state actors or their transnational proxies. I am pleased to share with you that the Consultative Loya Jirga concluded their deliberations yesterday after many heated discussions. And they overwhelmingly endorsed the signing of the Agreement between Afghanistan and the United States.

The Bilateral Security Agreement with the United States is the culmination of a number of strategic partnership agreements we have signed with our allies and friends in the region and beyond. In October 2011, we signed a comprehensive Strategic Partnership Agreement with India. These agreements of strategic cooperation, backed by a number of international conferences and regional processes, have reassured the Afghan people and Government of the continued, enduring support for the stabilization and development of Afghanistan now and in the post-2014 period.

At the same time, it has demonstrated broad consensus and realization among countries in our region and beyond that without a stable Afghanistan, there can be no regional stability and international peace and security. And this gives us concrete hope in continuing to pursue our role in reviving the Silk Road, based on a broad agenda of promoting regional economic cooperation and integration, in part through the Istanbul Process.

The Istanbul Process and its related Confidence Building Measures (CBMs) are geared towards a regional compact whereby the 14 countries of the Heart of Asia cooperate with Afghanistan and with one another in order to stabilize Afghanistan politically and economically. Last week, the Government of India—which leads the key CBM of Commerce, Trade, and Investment under the Istanbul Process—organized an international conference on “Doing Business with Afghanistan.” The enthusiasm with which many regional and international firms participated in the two-day conference and visited the exhibition of over 30 Afghan businesses and their products in New Delhi demonstrated our region’s increased interconnectedness and interdependence, signalling to the countries of the region that that a stable, peaceful, and prosperous Afghanistan is the key to connecting South Asia with Central Asia in a constructive, win-win way, indeed, reminiscent  of the free flow of commerce and trade across different nations and cultures in the Silk Road era.

Fortunately, such an environment has already begun emerging. India is actively pursuing a “Central Asia Connect” policy, while Pakistan’s civilian government with a much stronger popular mandate is seeking a comprehensive rapprochement with India, based on an economic cooperation agenda. At the same time, Pakistan has committed to non-interference in the Afghan affairs, and pledged sincere support for facilitating an Afghan-led and Afghan-owned peace process to end the terror campaign of the Taliban against our innocent, suffering people across Afghanistan.

It is also heartening to see that India, Russia, and China have held bilateral and trilateral dialogues on stabilisation of Afghanistan with far-reaching implications for regional security, while supporting the continued presence of the US forces in Afghanistan beyond 2014, based on the Bilateral Security Agreement to be signed with the United States. And we too welcome the historic nuclear deal reached yesterday between Iran and major world powers, which will further help reduce security tensions in our neighborhood and the broader region, which has experienced much political volatility and violence.

The promise of a changing security landscape in our region and beyond should enable Afghanistan to work along with our nation-partners towards full implementation and utilization of the Central Asia-South Asia 1000 (CASA-1000), the Turkmenistan-Afghanistan-Pakistan-India Pipeline (TAPI), and the Chahbahar Port. These and similar projects enhance regional connectivity and deepen regional economic interdependence, gradually forcing the otherwise competing, hostile states into cooperation with one another. As these projects get implemented, Afghanistan will vigorously pursue to play our natural role in further connecting the least connected countries of the Silk Road in South Asia and Central Asia. At the same time, we will work with our like-minded friends, allies, and partners—particularly India—to open borders for people-to-people contacts, facilitate transit trade and cross-border investment, and promote and implement trade and investment policy reforms at home and throughout the region.

So, the years ahead hold much promise for the further expansion of economic cooperation among the 14 countries of the Heart of Asia. We expect increased regional trade and investment to bring about further economic interdependence, slowly moving the region towards integration. The geographic centrality of Afghanistan to the realization of this process is undeniably vital. In other words, as I stated earlier, without a peaceful and stable Afghanistan, there can be no New Silk Road or regional economic integration. Indeed, we do hold the key to reviving the Silk Road, and look forward to serving as a pillar of stability and prosperity for the whole region.