It Will Take a Parsi Prime Minister, a Hindu President and a Christian Speaker to Bring Back Jinnah’s Pakistan

It will now take a Parsi prime minister, a Hindu president and a Christian speaker of the House concurrently to bring back Jinnah’s Pakistan

What has two origins has no origin, and to the Arab philosopher, what has no origin has no end. A mighty pill is admittance to swallow: admittance that marred and misty is our beginning and greatly unknown is the purpose of the land of the pure. 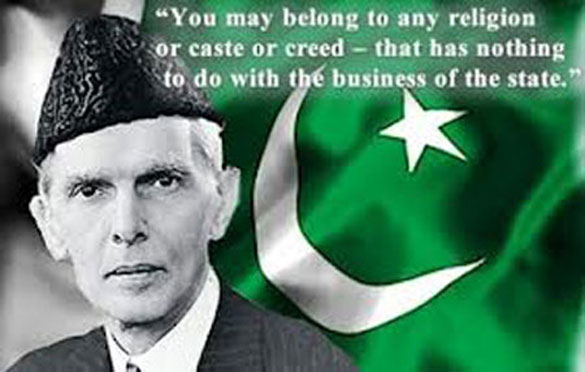 A visit to any federal office is incomplete without a picture of Jinnah, a Jinnah who is clothed in a Sherwani with an astrakhan hat covering his head. That was his regular attire but only during the last 10 years of his life, writes Aziz Akhmad. The earlier years of his life were spent in 200 different suits, all of which stood as a testament to sartorial sublimity. It is for the federation to explain: why that Jinnah?

Jinnah was English by most standards, even when it came to his eclectic tastes in food or drink. When he declared on August 11, 1947, “Religion or caste or creed that has nothing to do with the business of the state”, it seems that he was also referring to himself. His lifestyle was secular and the strongest facet of a Musalman in him was cultural. Jinnah created a Pakistan, a secular federation for Muslims to live in.

Liaquat Ali Khan, his most trusted lieutenant, however, had more directed aspirations, one of which most clandestine. By 1949, Jinnah was gone and federal astrakhan pictures could not protest; the way to an Islamic Republic was clear. Liaquat’s own astrakhan was Islamic in nature and so followed the Islamic Republic of Pakistan via the Objectives Resolution, Article 2 A. Liaquat created a Pakistan, a haven for Islam.

A few decades passed and the concept of Pakistan slowly gave in to the mists of time. Whoever did try to seek the inception bona fides found only a bone of contention, already being gnawed at different ends by liberals, schematic politicians and conservatives. The fight for this bone has been harsh but silent, prolonged but unnecessary, with either Jinnah’s Pakistan or Liaquat’s Pakistan as collateral loss. But why does it matter anyways?

The day the Objectives Resolution was embedded into our constitution as Article 2 A, the minorities who opted to stay back were doled out their first lesson with great subtlety, constitution-style. They were now second-class citizens in their state of foremost priority. The front men of the Muslim League did take quite a few leaves out of the Congress book of definitive politics, leaves that brought forth a Muslim Raj. Jinnah’s own vision contained no space or tolerance for the imposition of such a Muslim Raj.

If this misty nation was a secular federation, the state under Zulfiqar Ali Bhutto could not have ousted Ahmedis from the ranks of the Mussalmans. The question of the hour in 1974 was not whether they were Musalman or not; rather the question was what business did the state have in such a declaration? Did Bhutto not know that he had given out an official warrant of persecution in this official fatwa? Were they not citizens with a right to life? The clerics had won, along with a thorough embrace of Liaquat’s Pakistan. Jinnah was now but a man on the currency note, again, sporting an astrakhan hat and a Sherwani.

The never-to-be secular federation would have culturally hedged our society against the dynamic atrocities of Gen Ziaul Haq and his ‘Islamic Movement’ (1980s). Religion was used and abused, factions created and played with to fight each other. Sunni and Shia now tried to settle their difference on the street via the then legal Sipah-e-Sahaba and Sipah-e-Muhammad, with much acerbic kudos to the humanity Islam preaches. Liaquat’s Pakistan, though a supposed haven for Islam, had but helped give way to a confused and enraged version of it.

Jinnah’s secular nation was never about a raising a white flag to spirits on the counter, a black flag to religiosity or sheltering nightclubs in the left precinct. Jinnah’s secular nation was founded on the political philosophy of liberalism, one that gave way to human rights, equality in citizenship, freedom of action and individual liberty. Jinnah’s Pakistan never asked for an individual compromise on religion, but instead exerted complete indifference to an individual’s approach towards it.

When he betrayed Jinnah, Liaquat Ali Khan never saw this enraged version of Islam on the horizon. He did, however, know the act undertaken was irreversible, something allegorical to the murder of a vision. Perhaps it will now take a Parsi prime minister, a Hindu president and a Christian speaker of the House concurrently to bring back Jinnah’s Pakistan. Till then, the mists will remain and crazed orthodoxy shall revel.

Indeed, a powerful tool this astrakhan cap and Sherwani is.