Half-baked and half-hearted policies that the BJP has so far adopted to attract the minority community have not worked. The main Opposition party should show sincerity towards the minorities, and for that it must take the help of credible leaders of the community

Outlying his roadmap for transforming the NDA into ‘NDA Plus’ ahead of the 2012 general election, at the BJP’s recent national executive meeting at Surajkund in Haryana, veteran leader LK Advani said the process would involve reassuring potential allies that they have nothing to be apprehensive about partnering with the party. 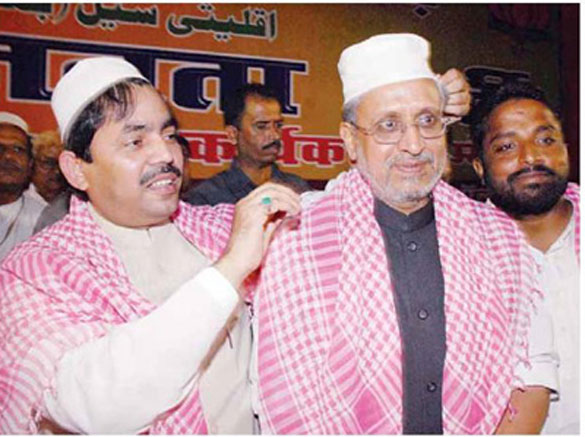 “This requires an imaginative re-projection of our commitment to secularism. We should, with full conviction, reassure our brethren belonging to the minority communities that we brook no discrimination or injustice in dealing with different sections of our diverse society”, he said.

Further, the former Deputy Prime Minister also suggested evolving a ‘Common National Commitment to Good Governance — of tomorrow’s NDA Plus’. Interestingly, out of the eight elements he suggested, three points are directly related to the minorities.

They include complete and earnest assurance to preserve communal peace, promote communal harmony and strengthen national integration, promote social justice with social harmony and give economic reforms a demonstrably pro-poor thrust, with innovative policy initiatives for Kisans, landless workers, and workers in the unorganised sector, SCs, STs, OBCs and the poor among the minorities.

While this could be interpreted by some sections as an attempt by the architect of the Ayodhya movement to gain wider acceptability post-Jinnah episode, the fact also remains that the BJP cannot ignore almost 13.4 per cent of the country’s population (Census 2001), not only to retain and increase its allies but also because the minorities matter in electorally crucial States such as Uttar Pradesh (18.5 per cent), Bihar (16.5 per cent), Assam (31 per cent) and Andhra Pradesh (14 per cent), where the party has a significant presence.

However, save for a couple of prominent Muslim faces in its central leadership, the party’s attempt to reach out to the community has been a superficial, if not insincere, exercise. It has in vain tried to gain the support of Muslims in the past by wooing either discredited or little known clerics and middlemen, whose sole objective has been to extract their pound of flesh rather than take the party’s message across to the community.

Though it had always opposed the ‘minority appeasement’ policy of the Congress, the BJP has not hesitated from playing the same game while in power. For instance, in August 2002, the party pompously declared how it outperformed the Congress in providing Haj subsidy.

Then Union Civil Aviation Minister, Shahnawaz Hussain, the party’s young Muslim face in the Cabinet, tom- tommed how  the BJP Government had been far more generous to the Haj pilgrims than the previous Congress regimes. He pointed out that while the Congress had spent a “paltry sum” of Rs10.54 crore for the Haj pilgrims, the BJP Government had released a whopping Rs164 crore as Haj subsidy.

Again, addressing an election rally in the Muslim-dominated Kishanganj, then Prime Minister Atal Bihari Vajpayee promised to provide two lakh jobs to Urdu teachers, prompting many to ask later as to how many such teachers were actually appointed during the NDA regime.

What’s more, during the 2004 poll campaign, a select band of Muslims set up a ‘Himayat Committee’, which toured Uttar Pradesh in a bus with portraits of then Pakistani President Pervez Musharraf and Mr Vajpayee and asked the Muslims to vote for the BJP, in an act perceived by many Muslims as an ‘insult’  and as ‘questioning’ their patriotism.

Over a decade since then party chief Bangaru Laxman’s landmark “Muslims are the blood of our blood” speech at Nagpur and a stint in office with little to write home about on the minorities welfare front, the party will have to reach out to the real representatives of the community, to look truly pro-minorities.

Paying lip service to the concerns of the minority community as against the vote-bank politics of other parties won’t suffice. BJP-ruled States should become role models in the socio-economic emancipation of the Muslims, including modernisation of madrasas, education of children, particularly girls and ensuring proper utilisation of the Waqf property for the benefit of the community at large, as against vested interests and individuals.

More importantly, BJP Governments should recognise and isolate the Wahhabi elements and strengthen the hands of the peace-loving and patriotic Sunni Sufis. The growing influence of Wahhabism is a threat not only to the country but also the Sunni Sufi traditions, which have contributed immensely to our composite heritage.

Congress Governments are realising the dangers fast. The Ashok Gehlot regime in Rajasthan and the National Conference-Congress Government in Jammu & Kashmir have responded against the Wahhabi elements, who are making desperate attempts to dominate minority-related Government institutions, influence policy matters and capture the lucrative Waqf property, in pursuit of their divisive, fundamentalist agenda. It’s time the BJP-ruled State Governments too learn to distinguish the wheat from the chaff instead of getting “overwhelmed” by some Muslim support, without knowing their credentials. The party went gaga over an educationist-entrepreneur just because he praised the Chief Minister of a party ruled state, without realising it was a tactic to divert attention from the Wahhabi moorings and ideology of his institutions.

Like any other Indian, the Muslim youths too want jobs, peace, safety and prosperity. They are no more enamoured with slogans of threat to Islam or with sops such as Haj subsidies. They are fed up with political parties patronising them and treating them as vote-banks. Contrary to the stereotype image of the Muslims having a clinical hatred for BJP, the electorally proven fact that 10 per cent of the minorities in Gujarat voted for the party is only a small indicator of the deep undercurrents below and the changing dynamics in the community’s mindset.

Muslims are no more naïve to determine their voting preference on the basis of any face or façade. They have learnt to see through the dubious games of political parties. They hold the Congress under PV Narasimha Rao more responsible for the demolition of the disputed structure at Ayodhya rather than the BJP or its leaders. That communities keep their wounds open to fester is a myth perpetuated by vested interests to browbeat potential political rivals. Isn’t it a fact that the people of Punjab had voted for Congress, both in the Assembly and Lok Sabha elections, from time to time, post-Operation Bluestar and the 1984 pogrom?

Indian Muslims too have moved forward post-Partition. There could not have been anything more difficult and challenging. From the days of a Yusuf Khan donning a Hindu name (Dilip Kumar) to gain acceptability to the days of SRK’s My name is Khan assertion of identity and yet remaining a national heart-throb, the community has come a long way and come to terms with the realities. A life of peace and dignity is what an average; educated Indian Muslim looks forward to.

Michael Eugene Porter, professor at Harvard University, had once famously remarked, “The essence of strategy is choosing what not to do.” The BJP too would do well if it does not resort to the same ‘appeasement politics’ it accuses the Congress of practising and does not rely on a handful of opportunistic clerics and self-styled Muslim leaders to reach out to the community.

The party should also realise that any change in the community’s perception of the BJP or the former’s attitude towards it would not happen overnight.

Nevertheless, a better appreciation of the Muslim psyche, a deeper understanding of the Muslim polity, a closer engagement with the intellectuals, a conscious and greater involvement of Muslims at the grassroots level and a strategic response to the aspirations of the community can help the party convert many a Muslim into the party’s foot soldiers, in its march to Delhi in 2014.