China’s Crackdown on Muslims of Hainan Island: The Utsuls Were Once Celebrated by the Chinese Government for Their Links to the Larger Muslim World

By Keith Bradsher and Amy Qin

The call to prayer still echoes through the alleys of Sanya’s nearly 1,000-year-old Muslim neighbourhood, where crescent-topped minarets rise above the rooftops. The government’s crackdown on the tiny, deeply pious community in this southern Chinese city has been subtle. 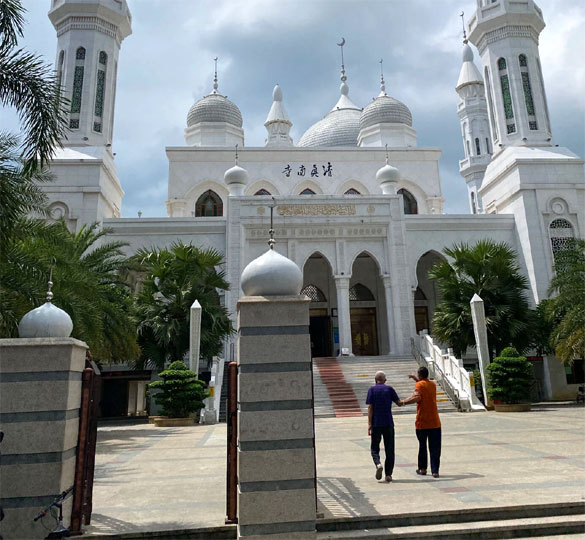 A mosque in Sanya, a city on the southern Chinese island of Hainan.Credit...Keith Bradsher/The New York Times

Signs on shops and homes that read “Allahu Akbar” — “God is greatest” in Arabic — have been covered with foot-wide stickers promoting the “China Dream,” a nationalistic official slogan. The Chinese characters for halal, meaning permissible under Islam, have been removed from restaurant signs and menus. Authorities have closed two Islamic schools and have twice tried to bar female students from wearing headscarves.

The Utsuls, a community of no more than 10,000 Muslims in Sanya, are among the latest to emerge as targets of the Chinese Communist Party’s campaign against foreign influence and religions. Their troubles show how Beijing is working to erode the religious identity of even its smallest Muslim minorities, in a push for a unified Chinese culture with the Han ethnic majority at its core.

The new restrictions in Sanya, a city on the resort island of Hainan, mark a reversal in government policy. Until several years ago, officials supported the Utsuls’ Islamic identity and their ties with Muslim countries, according to local religious leaders and residents, who spoke on condition of anonymity to avoid government retaliation.

The party has said its restrictions on Islam and Muslim communities are aimed at curbing violent religious extremism. It has used that rationale to justify a clampdown on Muslims in China’s far western region of Xinjiang, following a series of attacks seven years ago. But Sanya has seen little unrest.

The tightening of control over the Utsuls “reveals the real face of the Chinese Communist campaign against local communities,” said Ma Haiyun, an assistant professor at Frostburg State University in Maryland who studies Islam in China. “This is about trying to strengthen state control. It’s purely anti-Islam.” 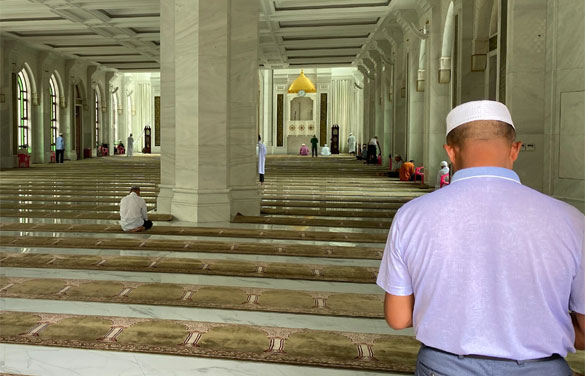 Large mosques in Sanya, like this one photographed last fall, are filled with Muslims from all over China during the winter, as families from cold northern provinces flock to tropical Hainan.Credit...Keith Bradsher/The New York Times

The Chinese government has repeatedly denied that it opposes Islam. But under Xi Jinping, its top leader, the party has torn down mosques, ancient shrines and Islamic domes and minarets in northwestern and central China. Its crackdown has focused heavily on the Uighurs, a Central Asian Muslim minority of 11 million in Xinjiang, many of whom have been held in mass detention camps and forced to renounce Islam.

The effort to “sinicise Islam” accelerated in 2018 after the State Council, China’s cabinet, issued a confidential directive ordering officials to prevent the faith from interfering with secular life and the state’s functions. The directive warned against “Arabisation” and the influence of Saudi Arabia, or “Saudi-isation,” in mosques and schools.

In Sanya, the party is going after a group with a significant position in China’s relations with the Islamic world. The Utsuls have played host to Muslims from around the country seeking the balmy climes of Hainan province, and they have served as a bridge to Muslim communities in Southeast Asia and the Middle East.

The Utsuls’ Islamic identity was celebrated for years by the government as China pushed for stronger links with the Arab world. Such links have been key to Xi’s Belt and Road Initiative, a program to finance infrastructure projects across the world and increase Beijing’s political sway in the process.

The Utsuls have become “an important base for Muslims who have moved abroad to find their roots and investigate their ancestors,” said a government notice in 2017 hailing the role of Islam in Hainan in the Belt and Road plan. “To date, they have received thousands of scholars and friends from more than a dozen countries and regions, and are an important window for cultural exchanges among peoples around the South China Sea.” 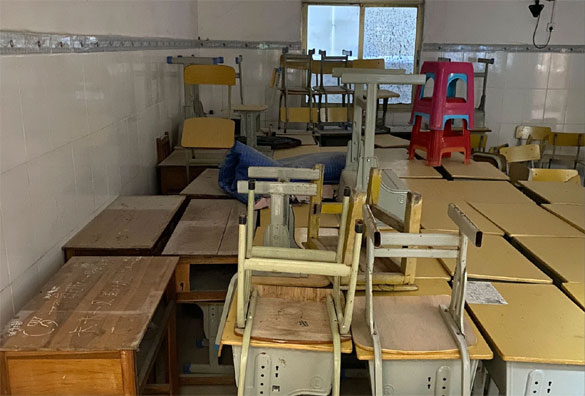 Despite being officially labelled part of China’s largest ethnic minority, the Hui, the Utsuls see themselves as culturally distinct from other Muslim communities in the country.

They are Sunni Muslims, believed to be descended from the Cham, the long-distance fishermen and maritime traders of the Champa Kingdom, which ruled for centuries along Vietnam’s central and southern coasts. Starting as early as the 10th century, Cham refugees fled war in what is now central Vietnam and travelled to Hainan, a tropical island the size of Maryland.

Over the centuries, the Utsuls maintained strong links with Southeast Asia and continued to practice Islam largely unfettered. But during the Cultural Revolution of the late 1960s and early 1970s, roving bands of Red Guards devoted to Mao Zedong destroyed mosques in Utsul villages, as they did across China.

As China opened to the world in the early 1980s, the Utsuls began reviving their Islamic traditions. Many families reconnected with long-lost relatives in Malaysia and Indonesia, including a Malaysian former prime minister, Abdullah Ahmad Badawi, whose maternal grandfather was an Utsul who grew up in Sanya.

To this day, many Utsuls, also known as the Utsats, speak a distinct Chamic language similar to that still used in parts of Vietnam and Cambodia, in addition to Chinese. A sour tamarind fish stew infused with Southeast Asian flavours remains the local specialty, and elders pass on stories of their ancestors’ migration to Hainan. Women wear colorful headscarves, sometimes beaded or embroidered, that cover their hair, ears and neck, a style similar to head coverings worn by Muslim women in Malaysia and Indonesia.

Yusuf Liu, a Malaysian-Chinese writer who has studied the Utsuls, said that the group had been able to preserve a distinct identity because they were geographically isolated for centuries and held firm to their religious beliefs. He noted that the Utsuls were similar in many ways to the Malays.

“They share many of the same characteristics, including language, dress, history, blood ties and food,” Liu said.

As Sanya’s tourism economy boomed over the past two decades, the Utsuls’ ties with the Middle East also grew. Young men travelled to Saudi Arabia for Islamic studies. Community leaders set up schools for children and adults to study Arabic. They started building domes and minarets for their mosques, shifting away from the traditional Chinese architectural style. 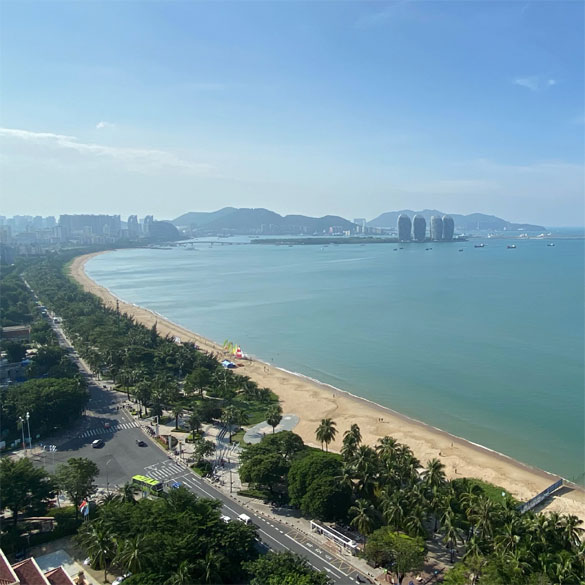 For centuries, the Utsuls have lived several hundred yards inland from this beach, which Hainan’s tourism boom has made one of the most famous in China.Credit...Keith Bradsher/The New York Times

Although there were some clashes between Utsuls and neighbouring Han in decades past, they have mostly lived in peace, with both groups benefiting from the recent surge in tourism. In contrast, Beijing has long tried to suppress Uighur resistance to Chinese rule, which has sometimes been violent. The party has said that its policies in Xinjiang have curbed what it describes as terrorism and religious extremism.

But in the past two years, even in Sanya, authorities have pushed to limit overt expressions of faith and links to the Arab world.

Local mosque leaders said they were told to remove loudspeakers that broadcast the call to prayer from the tops of minarets and place them on the ground — and, more recently, to turn down the volume as well. Construction of a new mosque was halted in a dispute over its imposing dimensions and supposedly “Arab” architectural elements. Its concrete skeleton now gathers dust. The city has barred children under 18 from studying Arabic, residents said.

Utsul residents said they wanted to learn Arabic not only to better understand Islamic texts, but also to communicate with Arab tourists who, before the pandemic, came to their restaurants, hotels and mosques. Some residents expressed frustration with the new restrictions, saying they called into question China’s promise to respect its 56 officially recognised ethnic groups.

A local religious leader who studied for five years in Saudi Arabia said the community had been told that they were no longer allowed to build domes. 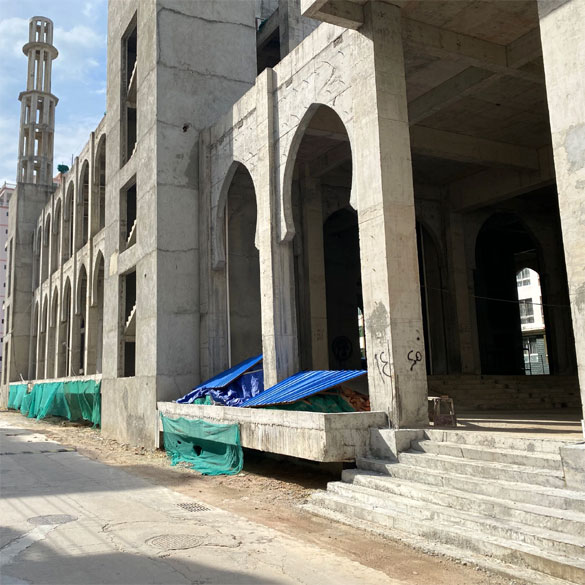 The local authorities have blocked the completion of this mosque in Sanya for the past two years, contending that it is much larger than its neighbourhood requires. Credit...Keith Bradsher/The New York Times

“The mosques in the Middle East are like this. We want to build ours like that so they look like mosques and not just like houses,” he said, speaking on condition of anonymity because some residents had recently been briefly detained for criticising the government. (In a sign of the sensitivity of the issue, a half-dozen plainclothes police officers questioned us in Sanya about our reporting at mosques.)

The community has sometimes resisted. In September, Utsul parents and students protested outside schools and government offices after several public schools forbade girls to wear headscarves to class. Weeks later, authorities reversed the order, a rare bow to public pressure.

Still, the government sees the assimilation of China’s various ethnic minorities as key to building a stronger nation.

“We need to use ethnic differences as a foundation on which to build a unified Chinese consciousness,” said Xiong Kunxin, a professor of ethnic studies at Minzu University in Beijing. “This is the direction of China’s future development.”

For now, the Utsuls are in an uneasy coexistence with authorities.

At the centre of the Nankai Mosque’s courtyard, a red Chinese flag flies at nearly the same height as the tops of the minarets. 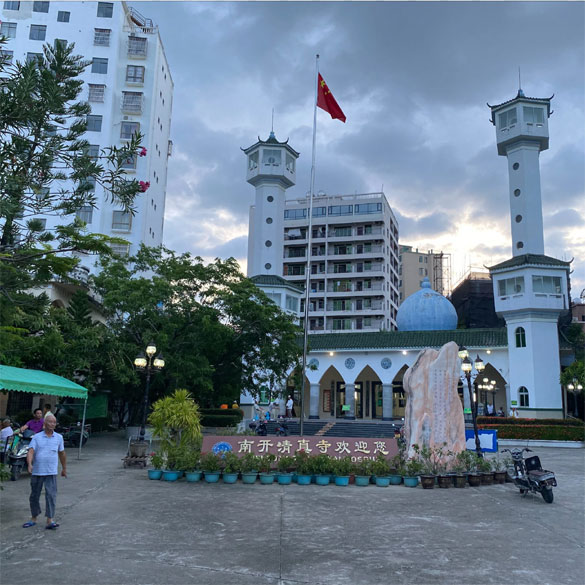 The Nankai Mosque in Sanya, rebuilt in the 1990s with Saudi-influenced minarets. As Utsuls became more prosperous in recent years, more of them traveled to Saudi Arabia for pilgrimages or for study.Credit...Keith Bradsher/The New York Times

Amy Qin is an international correspondent for The New York Times covering the intersection of culture, politics and society in China.