Shaheen Bagh Has Changed Something Fundamental in the Society

Tucked away in Southern Delhi and marked by winding allies, open drains, and dangling overhead power cables is the working-class Muslim-majority neighborhood of Shaheen Bagh. 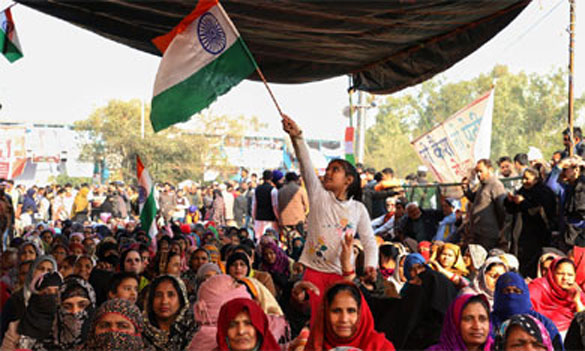 The leaderless sit-in demonstrations by Muslim women have continued around the clock for the last three months and are now being replicated in cities across the country.

Hundreds and at times thousands of women have gathered here for peaceful sit-in protests in a tent in the middle of a major highway — all day, every day, since December 15.

Many are housewives who, until now, had rarely left their homes. Some of them pitch in to look after the babies and grandmothers while others organize rugs for people to sit on. And in this leaderless movement, there’s always enough food and water to go around.

The demonstrations at Shaheen Bagh began in the days after the Indian Parliament passed the Citizenship Amendment Act, granting amnesty to non-Muslim immigrants from three neighboring countries (Pakistan, Bangladesh, and Afghanistan). The government, led by the Hindu nationalist Bharatiya Janata Party, says the act is intended to provide sanctuary to Hindus, Sikhs, Buddhists, Christians, Parsis, and Jains, fleeing religious persecution from the three Muslim-majority countries. 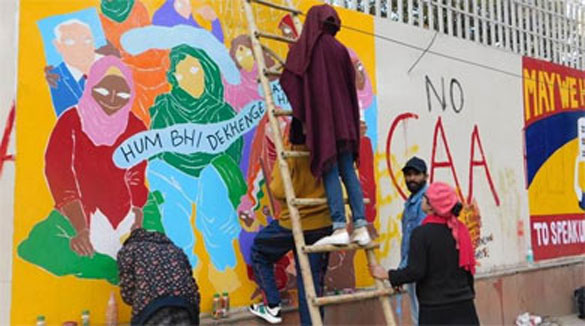 But Muslims in India say the law is discriminatory, that it challenges the secular nature of the Indian constitution by making religion a part of the basis for citizenship. It goes, they say, to the heart of what it means to be Indian.

And compounding the issue is an impending National Register of Citizens, a type of enumeration set to be implemented nationwide by 2021. In a country where a large percentage of the population lives in poverty and many don’t even have birth certificates, the NRC together with CAA will further marginalize the poor, the millions with no religion at all, as well as its Muslim population, who represent roughly 14% of Indian people.

In India, the world’s second most populous country, citizenship is not acquired automatically at birth, but rather is based on pathways that consider birth, descent, registration, and naturalization.

In a statement to the Seattle City Council denouncing the laws, Seattle-area economist and Indian immigrant S. Charusheela, who studies equity and development in South Asia, said, “Changes in citizenship law have made it easier to seek citizenship based on descent and religious origin and harder to seek based on birth within the country.

“For a child born today in India, the government requires up to two generations of proof of citizenship and ancestry to establish birth-based citizenship,” she said.

In the northeastern state of Assam, where the NRC was first executed last year, about 1.9 million people – 6% of the population there—were excluded from the register because they couldn’t establish citizenship. Many were Hindus, who with CAA can potentially still gain citizenship. But under the law, Muslims would be unable to make such a claim, and would be at risk of being declared foreigners and either detained or deported.

“NRC in Assam was so flawed that within families there are members who have been declared illegal,” says Shabnam, a 47-year-old mother of three who is participating in the Shaheen Bagh sit-in.

Some family members of former Indian President Fakhruddin Ali Ahmed, for example, didn’t make the list, as well as retired defense personnel, government officials, and even politicians. “Imagine if that can happen to educated, rich and powerful people, what will happen to the children of an uneducated single mother like me,” she says.

After the parliamentary vote in December, protests erupted around the country— including demonstrations by students at Delhi’s Jamia Millia Islamia (JMI) University, where police clashed with protesters. The university alleged that the police entered the campus without permission and assaulted staff and students indiscriminately.

One of those injured was Heena Ahmed’s daughter.

She had gone to meet someone on campus, her mother says, but was caught between police and protesters. Within a few days of the incident, Ahmed decided she could no longer remain silent and joined those sitting in protest of not just government actions like the one at Jamia, but also of the CAA and NRC.

Before, she says, she had little understanding of what the law meant for her community: “I was like most other people, least interested in civics.”

“We are just trying to survive,” she says. “But ever since I’ve started coming here I have started reading; I even read the preamble of the constitution for the first time after joining the protests,” she says.

Protests also spread to the U.S., where demonstrators in more than two dozen cities denounced the government’s actions during India’s 71st Republic Day celebrations. And in early February, the Seattle City Council became the first U.S. legislative body to pass a resolution, introduced by Indian-American Council Member Kshama Sawant, condemning the NRC and CAA, and “affirming Seattle as a welcoming city.”

In Shaheen Bagh, hundreds of demonstrators at a time gather to sit in protest during the day, their numbers swelling into the thousands by evening. In the face of governmental intimidation, polarized media attention, and threats of violence, they chant slogans such as, “Azadi” (freedom) and “Hum Kagaz Nahi Dikhayenge” (we will not show our papers).

All around them children play, volunteers distribute biscuits and water, and there’s earnest singing of patriotic Bollywood songs. Activists from across the country speak out against the new government laws. Not far away is a public art gallery with posters, photographs, and graffiti, a mock detention cell, a library set up in a converted bus stop and a medical tent.

Ahmed, a makeup artist by profession, balances the daily protests with her household obligations at home, leaving the sit-in each morning to get home by 6:30 to wake her kids for school. While they dress, she cooks them a packed lunch and makes sure they have finished their homework.

On a recent chilly morning, as her children hurriedly wolfed down breakfast, she sat down to catch her breath. Three hours later, she awoke with a start, the kids long gone. “I am constantly exhausted these days but this is an important fight,” she says. “…We have finally woken up. We are not going to allow this government to divide this country on the basis of religion. I am very proud of the fact that the women of Shaheen Bagh have reminded this country what it means to have a spine and more importantly, we have people of all faiths fighting against this injustice with us,” Ahmed adds.

Shaheen Bagh has changed something fundamental, not just in the country’s political landscape and its response to this latest governmental policy—but also in society. Women-led “Shaheen Baghs” have sprung up all over India—from major metro-cities such as Mumbai and Kolkata to smaller towns.

The idea of organizing 24×7, all-women sit-ins in the neighborhoods where they live is inspired because it removes one of the biggest obstacles to women’s participation. “Men in our families aren’t worried about our safety,” Nusrat Ameen, a 58-year-old, explains. “This tent is only for women and children. Men stand on the other side of the rope that surrounds the tent. No one would have imagined that women could stay out all night in a city like Delhi, but we have no fear here. We stick together and take care of each other.”

The women spend 12 to14 hours at the protest every day and because many have to still cook, clean, and take care of their families, most like Nafeesa Begum, a 31-year-old mother of two, have been existing on little sleep.

She’s at the protest from 5 to 7 each evening until the next morning when she leaves to get her daughter off to school and her taxi driver husband off to work.  She also does housecleaning to supplement the family’s income.

All the sacrifice, she says, is worth it because “we are Indian; we shouldn’t have to prove this.

“Our ancestors have built this country from ground-up just like [Prime Minister] Modi’s. What makes him Indian excludes us? [Is it] just because we pray to a different God?” she asks.

The atmosphere at Shaheen Bagh is upbeat and hopeful even though there is a palpable fear of a crackdown by the authorities and violence. On a recent day, a right-wing fanatic flashed a gun at the protest and a few days later, another fired two shots in the air.

Noornisa, who offered no last name and gives her age as 70-something (she doesn’t know her date or year of birth) flashes a smile. With her slight frame, she’s a far cry from what one would imagine a “political” protester to be. Her presence though, is a reminder that this protest is unlike anything independent India has ever seen before. Noornisa, who sits on a plastic chair close to the stage, has been a regular from day one. “I go home only because I have a husband who is unwell,” she says. “I keep telling him that he needs to learn to do things on his own. I am busy fighting for my country.”