Why Secular but Illiberal Governments Are No Guarantee of Religious Freedom

In a recent op-ed in the New York Times, S. Frederick Starr argues that the countries of post-Soviet Central Asia   are “experimenting with secular governments and free markets” and could thus serve as a “template” for political development and religious tolerance in the broader Muslim world.  While Starr makes interesting points about Central Asia’s unique role in Islamic history, his interpretation of modern Central Asian governments’ approach to religion is flawed.  What Starr fails to understand is that when it comes to securing the rights of citizens of all faiths to worship peacefully, the distinction between secular and non-secular government is less important than the distinction between liberal and repressive responses to religious expression.  Central Asian leaders’ insistence on secular government and vocal opposition to “extremism” is not an indication of a liberal commitment to religious moderation; rather, it is part of a broader campaign of repression against any forms of assembly or expression outside of state control. Though Central Asia may have been beacon of religious tolerance in the distant past, the region’s current approach to religion does little to improve religious freedom or encourage moderate views, regularly violates the rights of its citizens, and is hardly worthy of emulation. 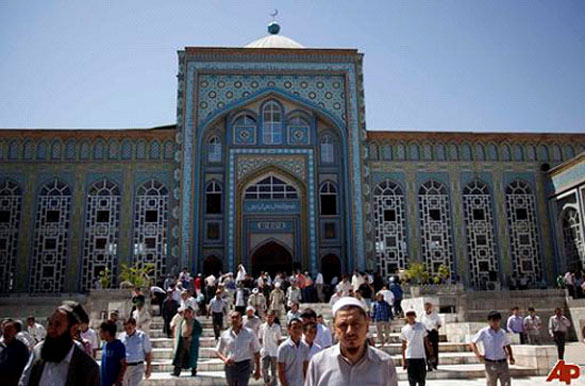 The governments of post-Soviet Central Asia receive some of the worst rankings for religious freedom in the world. The 2013 Annual Report of the U.S. Commission on International Religious Freedom flags Turkmenistan, Tajikistan, and Uzbekistan as countries of particular concern, along with Saudi Arabia, Pakistan, Iran, and North Korea (HT Nate Schenkkan). Kazakhstan also features prominently as a second-tier country of concern.  Though Kyrgyzstan has maintained a somewhat more liberal attitude, a recent speech by President Almazbek Atambayev suggests that the winds might be changing.  The Pew Research Centre’s project on government restriction of religion also identifies Kyrgyzstan and Turkmenistan as having high levels and Kazakhstan, Tajikistan, and Uzbekistan as having very high levels (the worst possible score) of religious restrictions.

The practices in these countries that have sparked concern include banning religious apparel in public places; banning children from mosques; creating labyrinthine registration requirements that make it nearly impossible for religious groups to operate legally; and harassing and imprisoning those that the regime labels “extremists.”  Not surprisingly, around a third of Muslim survey respondents in Kyrgyzstan (32 percent), Kazakhstan (32 percent), and Tajikistan (40 percent)–and well over half in Uzbekistan (61 percent, the highest level among the countries surveyed)–indicated that they did not feel free to practice their faith. These numbers are quite similar to those in the Middle Eastern countries sampled, which ranged from a high of 54 percent in Egypt and 52 percent in Iraq to a low of 12 percent in Morocco and 10 percent in Lebanon. The report also notes that Muslims in both Central Asia and the Middle East were more likely than respondents from other regions to indicate that members of other religions were not free to practice their faith.  Based on this evidence, it is difficult to make the case that the Central Asian approach to religious policy is somehow conducive to freedom of religion.

Of course, leaders of these states justify their laws not on the grounds of religious tolerance, but by arguing that they are under threat from Islamic extremists.  It is true that several violent attacks have occurred throughout the region over the past two decades.  The Islamic Movement of Uzbekistan (sometimes in conjunction with Hizb ut-Tahrir) has been accused of carrying out suicide bombings and armed attacks in Uzbekistan, Kyrgyzstan, and Tajikistan in the late 1990s and early 2000s. A group called Jund al-Khilafa, which may or may not be affiliated with IMU, has been blamed for a more recent set of attacks in Kazakhstan. Islamist groups also played a role in Tajikistan’s 1992-1997 civil war. Central Asian governments insist that networks of radical Islamists are robust, and that were it not for their jailing of devout Muslims and strict regulation of religious activity, attacks would be far more frequent.

However, these governments’ tendencies to label all opponents “extremists” (not to mention obtain confessions using torture) and to conflate religiosity with a propensity for violence make it difficult to assess the true extent of militant beliefs.  In both official statements and popular conversations, men who grow beards and women who wear the veil are derided as “Wahhabis” and accused of being dangerous.  Recent polling data indicate that 39 percent of citizens in Tajikistan, 62 percent in Kyrgyzstan, and 63 percent in Kazakhstan are “concerned” about religious extremism. Yet religious devotion does not imply support for violence—that same polling data also indicates low levels of support for religious violence in both Central Asia and the broader Muslim world.  Religiosity does not even imply lack of support for secular democracy, as  Amaney Jamal and Mark Tessler have shown.

Moreover, though aggregate GDP levels have recovered since the collapse of the Soviet Union, public infrastructure has continued to deteriorate, and many parts of rural Central Asia lack access to heat, water, electricity, schools, and health services. The growth of Islamic communities and charities in Central Asia has, in some cases, helped in the face of increasingly scarce public goods.  The popular approval that these actions generate, however, can cause Central Asian governments to view these organizations as a political threat, and to seek to discredit them by painting them as militants. Christian Bleuer, for example, documents the Tajikistani government’s eagerness to assume that any regime opponents are connected to the IMU.  The government of Uzbekistan takes a similar approach, and has imprisoned thousands of Muslims for participating in “illegal groups”.  Though proving this would require a more complex analysis, it is certainly plausible that the popular concern about extremism mentioned above has more to do with governments’ constant hyping of the threat than it does with actual support for militant views.

More importantly, even if the threat of Islamist violence is actually high, existing research suggests that repressing religion is precisely the wrong way to respond. Mohammed, for example, argues convincingly that Islamist insurgency is most likely when the state represses indiscriminately and blocks other forms of political participation. Arguments that the only way forward is the potentially violent overthrow of the incumbent regime seem more plausible when that regime harasses its population and forbids any other form of response. Eric McGlinchey identifies a similar trend in Uzbekistan, where harsh government crack-downs in Namangan and Andijan created sympathy for relatively militant groups.  Analysts have also cited frustration with government corruption, incompetence, and violence as sources of growing support for radical Islam in Kazakhstan and Tajikistan.

These observations might seem odd given recent scholarship on the links between poverty, state oppression, and support for militant Islam.  Survey experiments in Pakistan by Blair et al and Fair et al have shown that individuals who feel impoverished are less likely to be supportive of violent Islamic groups because they know that they will bear the brunt of the negative consequences of living in a violent environment.  Post-Soviet Central Asia is no exception to this general pattern. Despite the region’s serious problems, the response of most citizens is to keep their heads down and try to survive rather than to engage in some sort of violent uprising. It is still plausible, however, that the limited support for extremism which does exist is partially driven by state-sponsored violence. Put simply, if there is a reasonable chance that you will be accused of extremism, tortured, and possibly executed regardless of your beliefs, there seems to be little reason to shun militant groups in order to avoid being a victim of violence. At least a militant group might offer some hope of regime change.

Though this op-ed (and much of policy debate on the region) focuses on the risks of militant Islam, this focus misses a more important point. Sarah Kendzior rightly argues that the real problem with repression in post-Soviet Central Asia is not that it breeds instability or radicalism, but that regimes built on fear can prove surprisingly stable, and make the people who live under them miserable for extended periods of time. A combination of fear and other factors mean that the residents of post-Soviet Central Asia are unlikely to ever support militant Islam in large numbers.  A lack of visible militancy or open rebellion, however, should not be mistaken for sign of effective governance.  Nor should the coercion of individuals into a narrow state-sanctioned (and often corruption-riddled) version of Islam be mistaken for an embrace of “moderate Islam.”

Starr is right to argue that post-Soviet Central Asia deserves continued US attention, but not because the region’s governments are likely to produce political models worth emulating. Rather, these countries’ political practices—both with regard to religious freedom and to human rights more broadly–deserve careful consideration as the US decides how, among other things, to distribute leftover military equipment as it pulls out of Afghanistan.  Despite all of the obstacles that they face, the idealistic generation that Starr refers to does exist. They would be best served if policymakers stopped assuming that secular government and liberal government are equivalent.