Pauline Marois, And the New Politics of Religion

In his Sept. 12 Toronto Star column, decrying the Parti Québécois’ proposed Charter of Quebec Values, Haroon Siddiqui wrote that “[Pauline] Marois is engaged in an ugly cultural warfare of the right-wing Republican kind.” I agree that the Quebec Premier’s campaign against religious expression is “ugly,” but Siddiqui is misunderstanding the nature of that ugliness in an important way. 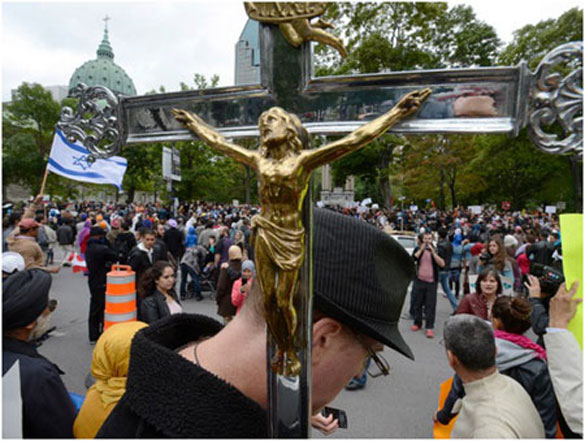 If any Republican state governor tried to introduce a law similar to Ms. Marois’ secularist charter, he’d be vilified by his own supporters as an atheist. The idea that Christianity is under assault in America is a prominent theme among U.S. conservatives, whose email lists bristle with tales of high school students being sent home for wearing Jesus t-shirts. Two years ago, when he was still seen as a leading Republican presidential hopeful, Texas governor Rick Perry initiated a major Christian prayer festival called The Response, and personally appeared at the event to read scripture.

In fact, Pauline Marois’ militantly secularist agenda cannot be placed at any point on the traditional left-right political spectrum. That spectrum is a creature of the Christian age — which ended in Canada, as in Europe, during the last century, as these societies abruptly became secularized.

It once was taken for granted that religious expression went hand-in-hand with the preservation of our society’s traditional (i.e., conservative) values and culture. But the most vibrant, assertive (and sometimes militant) expressions of religious faith within Canadian and European societies now come from outside Christian communities. And so the relationship between religion and traditional left-right politics has become confused. Standing up for religions rights in Canada these days can mean championing a Christian preacher’s right to excoriate homosexuality. But more often, it means upholding the rights of Muslims, Jews and Sikhs to wear specialized religious garb at work, in court, or in a voting booth.

This phenomenon has caused a reversal of traditional religio-political alliances since 9/11. Many conservatives, who decades ago might have championed the rights of churches vis-à-vis the state, now demand that the state assert dominion over mosque and mullah. And liberals who once applauded when Sinead O’Connor tore up a picture of the Pope on TV, now match arm in arm with head-scarved Muslims to oppose Ms. Marois’ secularism charter.

In some cases, modern identity-politics groups are so conflicted that it’s not always clear which side they’re on. In Montreal, for instance, socially liberal pro-Israel Jews have refused to participate in a demonstration against Ms. Marois’ legislation because that would mean rubbing elbows with socially conservative vociferously anti-Israel Muslims. (“The Jewish community speaks for itself and will not accept to be co-opted or manipulated by the dubious objectives of some of the organizers of the demonstration, who include religious radical fundamentalists with whom the Jewish community will never make common cause,” said one spokesman.) In this confused environment, slapping labels such as “right-wing Republican” on Ms. Marois, or on any of the factions that oppose her, is senseless.

To understand Ms. Marois’ gambit, a more useful comparison is with Europe — in particular, anti-Islamist politicians such as Pim Fortuyn in The Netherlands (who was assassinated in 2002). When Fortuyn called Islam a “backwards culture,” he was denounced as a right-wing fanatic. But in fact, he was a feminist who held all of the fashionable Nordic European positions on drugs and euthanasia. He also was a gay man whose opposition to Islamic religiosity was in large part a reaction to homophobia within Islamic communities. (In one famous televised debate with an imam, Fortuyn made a show of his gayness, until the cleric staged a homophobic meltdown, thereby proving Fortuyn’s point about the perils of multiculturalism.)

Classifying men such as Fortuyn in traditional political terms is impossible for the reasons described above, which is why people still argue about whether Fortuyn was a fascist or a radical progressive. (Perhaps the most apt term might be “right-wing liberal,” which is how Dutch anti-Islamist politician Geert Wilders sometimes is described. The term suggests someone who is willing to use harsh, even authoritarian, tactics to impose a socially liberal template on society.)

These European precedents suggest that Pauline Marois is going to have a difficult time turning her secularism charter into a successful campaign issue, even if polls tell us that many voters don’t much care for turbans and Niqabs. A lack of Muslim integration into mainstream society is a much more serious problem in Europe than in Canada. Yet even in Europe, hardcore opposition to immigrant religious cultures tends to be the domain of semi-respectable third parties, not truly mainstream politicians.

And the analysis above shows why: Marois’ brand of militant secularism is not a coherent mass phenomenon. Instead, it is awkwardly cobbled together from fragments of the old left, who now prioritize feminism and gay rights over multiculturalism; and fragments from the old right, who now have made peace with the evaporation of religious Christianity, and so embrace a fallback position of prioritizing secular homogeneity over the demands of newly emergent minority religious communities.

If multiculturalism truly were the biggest problem facing Quebec, a skilled politician might be able to take these two factions and meld them into a unified and enduring constituency. But Ms. Marois is not a skilled politician. And Quebecers, with their sub-standard health care and crumbling infrastructure, have a lot more to worry about than day-care workers in Hijabs.

Which is why I say that the chance of the Premier’s secularism charter becoming law, much less carrying her to a majority victory in Quebec’s next election, are slim to none.