Salman Rushdie and the Deobandi School of Thought 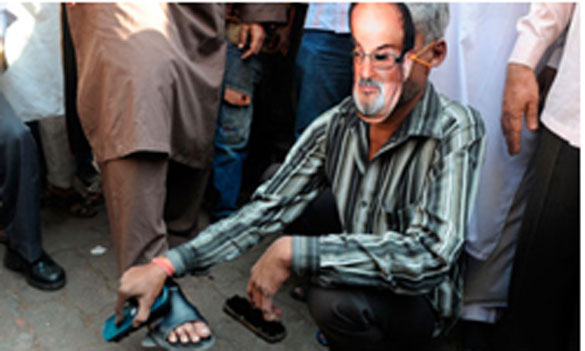 A cobbler wears a Salman Rushdie mask at a protest against his attendance of the Jaipur literary festival. Photograph: Indranil Mukherjee/AFP/Getty Images

That Salman Rushdie is once again at the centre of a political storm in the land of his birth over a book he wrote nearly a quarter of a century ago tells us something's afoot in Indian Islam.

The vice-chancellor of Islam's second most important seat of learning, the Darul Uloom, or house of knowledge, at Deoband in Uttar Pradesh, has demanded the author be stopped from attending the Jaipur literary festival at the end of this month.

Maulana Abul Qasim Nomani said on Monday that the "Indian government should cancel his visa as Rushdie had annoyed the religious sentiments of Muslims in the past".

Rushdie himself has pointed out he needs no visa, as a person of Indian origin (PIO) and it is unlikely he poses such a security threat for giving a lecture on "the chutneyfication of English" as to provoke a ban.

Indeed, he attended the same festival, co-founded by the British author William Dalrymple, in 2007 without hindrance.

Clues as to why this old scab is being picked again now are not hard to find.

The state assembly elections in Uttar Pradesh, where Deoband is based, 100 miles northeast of Delhi, are being held on 4 March.

Muslims in the province, who number just over 18% of the total 1.028 million inhabitants, have been promised a controversially high 9% sub-quota of seats out of a total of 27% reserved for groups officially designated "backward".

Nomani's call may just be muscle-flexing as the wrangling heats up.

Yet for other-worldly Deoband it is usually the honour of Islam rather than overt political gain that is at stake, as it tends to shun politics.

Deoband was founded in 1866, nine years after what Indians call the first war of independence, and what the British call the mutiny. The sepoys or military foot soldiers who launched the bloody assault on Delhi included Muslims from Uttar Pradesh.

Part of the seminary's founding myth lies, therefore, in the struggle it represented against the imperialism of ideas.

Even today, the modern campus with its rose gardens and stunning Arabic mosque exists within a warren of medieval lanes in an island of seclusion.

'"The men of Allah … particularly those august men who had themselves passed through this ordeal of blood and iron and had witnessed the corpses of Muslims biting the dirt and writing in blood, were beset with this thought and anxiety as to where the caravan of knowledge and gnosis should be given asylum and what means should be adopted to take care of the faith and religion of the hapless and helpless Muslims of India," says the official madrasa history.

The maintenance of this sense of grievance against western thought, and pride in its ability to resist it, as evidenced by the eventual downfall of the Raj, gives Deoband its charisma.

Deoband gave rise to the original Taliban movement – meaning "students". The Talib rulers of Afghanistan who overthrew the Soviet invaders trained at Deoband, and although Deoband's leadership ran a conference in 2008 denouncing terrorism, nonetheless the Taliban regime was the practical outworking of Deobandi teaching and methodology.

The scholar Philip Lewis, in his study of Deobandi education in Britain, describes it as "a closed system".

He tells of an elementary text on the many criteria a scholar has to meet before being considered competent to comment on the Qur'an. It concludes with a prophetic tradition, which solemnly warns students against entertaining their own opinion about Qur'anic meanings.

"The abode of those who ignore this warning is the 'fire' [of hell]," he says.

"This school is not about expansion of the mind but conditioning it," says the Indian journalist Edna Fernandes, who spent some days as a guest of the madrasa in India.

Small wonder Rushdie cannot be tolerated under any circumstances.