Islam for Peace, or Violence?

Until recently, often in private and sometimes publicly, the complaint was voiced that moderate Muslims do not speak out or not loudly enough against Muslim extremism, militant Islam. Now, curiously, the ongoing savagery of the Islamic State has prompted the high priests of “New Atheism” (for whom “moderate Muslim” is an oxymoron) to turn their guns against liberals in general. 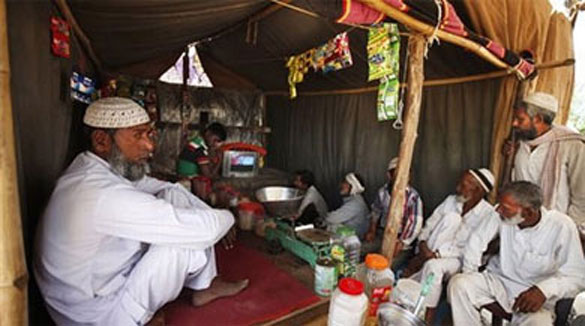 Do not ‘essentialise’ religion. Gandhi’s Gita and Azad’s Quran do not say the same thing as the Gita of Nathuram Godse and the Quran of Osama bin Laden. (Source: AP)

The bitter war of words was triggered by the comedian, satirist and HBO talk-show host, Bill Maher, who in his October 3 programme charged liberals with shying away from defending liberal principles when it came to Islam, “the only religion that behaves like the mafia”. Nodding vigorous consent, the American author, philosopher, co-founder and chief executive of Project Reason, Sam Harris, chimed in with “Islam is the mother lode of all bad ideas”. An outraged fellow-panellist, actor Ben Affleck, damned Maher and Harris’s views as “bigoted”, “racist” and “disgusting”.

Three days later, CNN invited the well-known Iranian-American scholar of religion, Reza Aslan, to answer the question: “Does Islam promote violence?” The same day, Ali A. Rizvi, the Pakistani-Canadian writer, physician and musician currently working on The Atheist Muslim, wrote “An Open Letter to Moderate Muslims”, which was posted on Huffington Post. “You condemn all kinds of terrible things being done in the name of your religion,” he said, “but when the same things appear as verses in your book [the Quran], you use all your faculties to defend them. This comes across as either denial or disingenuousness, both of which make an honest conversation impossible. This isn’t working anymore”. Rizvi’s parting words: “Islam needs reformers, not moderates”.

Here’s a hot-button issue; hot enough for political commentators such as Peter Beinart, Nicholas Kristof and Fareed Zakaria, among many others, to jump into the fray. From the way different views are now floating all over social media in India, it’s clear that this is by no means a debate relevant only “out there”.

So, does Islam promote peace or violence? That’s a “stupid” question. “Islam does not promote peace or violence,” Aslan told CNN, adding, “Like every other religion in the world, it depends on what you bring to it. If you are a violent person, your Islam, your Judaism, your Christianity, your Hinduism is going to be violent. There are Buddhist marauding monks in Myanmar slaughtering women and children. Does Buddhism promote violence? Of course not!”]

Aslan argued that the framing of the questions smacked of bigotry. If you take two or three examples, say of Saudi Arabia (“the most extremist country in the world”) or Iran, to “justify generalisations” about a community of 1.4 billion across the world, “that fits into the definition of bigotry,” he said.

Enter Beinart, to remind Maher and Harris of the two lessons liberals should and have learnt from their mistaken “anti-totalitarianism” during the Cold War era. “The first is to be precise about what you’re opposing. The second, to not get so carried away with your own virtue that you end up justifying terrible crimes.”

He recalled that because of their inability to “distinguish between the communism of Joseph Stalin and that of Ho Chi Minh… the pro-war liberals ignored the reality that in Indochina, America’s allies were no more democratic than its communist foes”. He quoted what historian Arthur Meier Schlesinger wrote in 1967: “The tragedy of Vietnam is the tragedy of catastrophic overextension and misapplication of valid principles”.

As for the second lesson, Beinart points to how, in their eagerness to establish their anti-communist credentials, American liberals assisted the McCarthy era assaults on basic human freedoms. And here is a more recent example: “When Affleck told Maher that America has ‘killed more Muslims than they’ve killed us by an awful lot… and somehow we’re exempt from these things because they’re not really a reflection of what we believe in’, he was making a crucial point”. Author and journalist Eric Margolis puts it best: “We Westerners have a charming and quaint belief that killing people from the air… is somehow not really as bad as… slashing his throat the way sheep are killed”.

What, then, is to be done? Here are a few suggestions:

One, do not “essentialise” religion. Remember that Gandhi’s Gita and Azad’s Quran do not say the same thing as the Gita of Nathuram Godse and the Quran of Osama bin Laden or “caliph” Abu Bakr al-Baghdadi. Like other religions, there is no one Islam; there are many Islams.

Two, look at the history of a religion. Islam is over 1,400 years old. Remember that the Yazidis and Christians being butchered by the barbaric IS used to be free, relatively at least, to practise their faith in that very region for centuries under Muslim rulers. Jews hounded out of Christian Europe found refuge in the Ottoman Empire.

Three, beware of “catastrophic” over-generalisations. Yes, al-Baghdadi and Ayman al-Zawahiri are Muslims, but so are Nobel Peace Laureates Shirin Ebadi and Malala Yousafzai, and our very own Aamir Khan.

Four, remember that religions do not need reform, their followers do. Liberals must consistently oppose infringements of universal human rights and freedoms anywhere and everywhere.

Five, militant atheism is not the answer to militant Islam. It only helps legitimise the extremists and the Islamophobes.