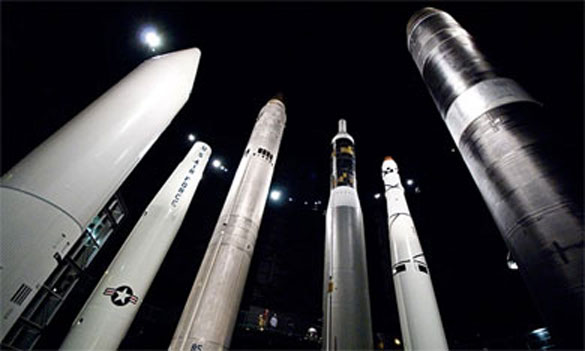 Strategic nuclear missiles from the cold war on display at the National Museum of the US Air Force. 'The cold war era assymetry is no longer tolerable.' Photograph: Alamy

We – Iran and its interlocutors in the group of nations known as the P5+1 – have finally achieved the shared objective of turning the Iranian nuclear programme from an unnecessary crisis into a platform for cooperation on nuclear non-proliferation and beyond. The nuclear deal reached in Vienna this month is not a ceiling but a solid foundation on which we must build. The joint comprehensive plan of action, as the accord is officially known, cements Iran’s status as a zone free of nuclear weapons. Now it is high time that we expand that zone to encompass the entire Middle East.

Iran’s push for a ban on weapons of mass destruction in its regional neighbourhood has been consistent. The fact that it precedes Saddam Hussein’s systematic use of WMDs against Iran (never reciprocated in kind) is evidence of the depth of my country’s commitment to this noble cause. And while Iran has received the support of some of its Arab friends in this endeavour, Israel – home to the Middle East’s only nuclear weapons programme – has been the holdout. In the light of the historic nuclear deal, we must address this challenge head on.

One of the many ironies of history is that non-nuclear-weapon states, like Iran, have actually done far more for the cause of non-proliferation in practice than nuclear-weapon states have done on paper. Iran and other nuclear have-nots have genuinely “walked the walk” in seeking to consolidate the non-proliferation regime. Meanwhile, states actually possessing these destructive weapons have hardly even “talked the talk”, while completely brushing off their disarmament obligations under the non-proliferation treaty (NPT) and customary international law.

That is to say nothing of countries outside the NPT, or Israel, with an undeclared nuclear arsenal and a declared disdain towards non-proliferation, notwithstanding its absurd and alarmist campaign against the Iranian nuclear deal

Today, in light of the Vienna deal, it is high time that the nuclear “haves” remedied the gap by adopting serious disarmament measures and reinforcing the non-proliferation regime.

It is time for the “haves” to finally come to terms with a crucial reality; we live in a globalised security environment. The cold war era asymmetry between states that possess nuclear weapons and those that don’t is no longer remotely tolerable.

For too long, it has been assumed that the insane concept of mutually assured destruction would sustain stability and non-proliferation. Nothing could be further from the truth. The prevalence of this deterrence doctrine in international relations has been the primary driving force behind the temptation by some countries to acquire nuclear weapons, and by others to engage in expanding and beefing up the strength of their nuclear arsenals. All this in blatant violation of the disarmament objectives set by the international community

It is imperative that we change this dangerous and erroneous security paradigm and move toward a better, safer and fairer arrangement. I sincerely believe that the nuclear agreement between my country – a non-nuclear-weapon state – and the P5+1 (which control almost all nuclear warheads on Earth) is symbolically significant enough to kick-start this paradigm shift and mark the beginning of a new era for the non-proliferation regime.

One step in the right direction would be to start negotiations for a weapons elimination treaty, backed by a robust monitoring and compliance-verification mechanism.

This could, in an initial phase, occasion the de-alerting of nuclear arsenals (removing warheads from delivery vehicles to reduce the risk of use) and subsequently engender the progressive disarmament by all countries possessing such WMDs. It is certainly a feasible goal to start this global project with a robust, universal and really genuine push to establish a WMD-free zone in the Middle East, if the relevant powers finally come to deem it not just a noble cause but a strategic imperative.

Such a new treaty would revive and complement the NPT for nuclear “haves”. It would codify disarmament obligations for nuclear-armed regimes that are not party to the NPT – but that are nonetheless bound – politically, by the international non-proliferation regime and, legally, by pre-emptory norms of http://www.theguardian.com/commentisfree/2015/jul/31/iran-nuclear-deal-israel-vienna-treaty-middle-east-wmdcustomary international law to disarm.

Iran, in its national capacity and as current chairman of the Non-Aligned Movement, is prepared to work with the international community to achieve these goals, knowing full well that, along the way, it will probably run into many hurdles raised by the sceptics of peace and diplomacy. But we must endeavour to convince and persist, as we did in Vienna.