Indian Muslims For Secular Democracy Condemns In Strongest Terms The Brutal Murder Of Kanhaiya Lal In Udaipur By 2 Muslim Fanatics, Who Have Openly Declared That They Did So For The Love Of The Prophet And Thus Is A Case Of Death For Blasphemy! 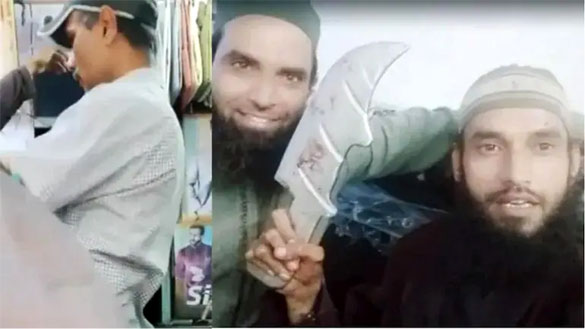 A Hindu shopkeeper (L) was killed in Udaipur by two men (R) over a social media post in support of Nupur Sharma.

A tailor by profession, Kanhaiya’s only ‘crime’ was that he put up an online post in support of Nupur Sharma. India is a country governed by its constitution which means that its citizens are obligated to follow the rule of law. We cannot have any sympathy for those extremist Muslims who espouse the ideals of the Taliban or ISIS, or those extremist Hindus who want to turn this country into a fascist Hindu Rashtra.

Some years back, we had a similar attack on a migrant Muslim worker, who was hacked to death on camera by Shambhulal Raigar. While there were online petitions supporting Raigar, it is heartening to note that all Muslim organizations have condemned the killing of Kanhaiya in unequivocal terms.

IMSD reiterates its stand that there is no place for such an extremist mindset in India and that the culprits be handed the strictest possible punishment.

We would also like to underline the fact we are disturbed by the proclivity of certain Muslim organizations who are demanding and campaigning for blasphemy laws, which is a very regressive demand. Blasphemy laws are unacceptable in a secular liberal constitutional democracy, and IMSD strongly opposes this demand by the All India Muslim Personal Law Board and other conservative Muslim organizations.

We advise those who speak on behalf of Muslim issues to desist from making emotional, bigoted, intolerant and fanatical appeals in the name of religion. As citizens of this country, the Muslim cause is best served through appeals to the constitutional ethos rather than some pan-Islamic rallying together in the name of saving the honor of the prophet.

We also need to understand that incidents like Udaipur also send a chilling message to dissenters within the Muslim community. The case of Saad Ansari, a young 19 year old educated boy from Bhiwandi (Maharashtra), who spoke his mind on the issue of blasphemy is a further case in point. The local Muslim community hounded him no end, even physically attacked him but we saw no condemnation from any Muslim organization or individual. Saad was made to apologise & read the Kalma again by the 150 strong mob. For his son's safety, his father has had to send Saad away to study. If a young Muslim boy is fettered and not allowed to speak his mind, then it is a telling statement on the depths of intolerance that we Muslims have descended to. While we rightly agitate for Zubair, the AltNews co-founder being hounded by the state, we are equally concerned about our regressive attitude which sent the young Saad away from his family. The police have registered cases both against Saad and the violent mob.

The IMSD appeals to all Muslims not to fall for the rightwing-Islamist rhetoric. Indian Muslims have been an exception to the worldwide Islamist movement, by shunning violence and reposing their faith in the constitution. It is with this faith in the foundation of our republic that Indian Muslims have categorically condemned the ISIS-style beheading of Kanhaiya in Udaipur. We hope that the same ethos also makes them withdraw cases against Saad Ansari.

In these difficult times, it's essential that the Indian Muslim community seriously and honestly introspect on the intolerance & bigotry within the community and arrive at ways to combat such cases of violent fanaticism.

It is imperative that we as Indians unite to resist and defeat all forms of religious extremism, hatred & violence and work towards creating a peaceful harmonious society, not one built on mere tolerance, but on mutual respect and acceptance of each others faiths, religions and cultures.